Please ensure Javascript is enabled for purposes of website accessibility
Free Article Join Over 1 Million Premium Members And Get More In-Depth Stock Guidance and Research
By Taylor Carmichael - Jan 13, 2021 at 8:00AM

Cinema stocks suffered badly in 2020. Movie theaters were shut down for months thanks to the coronavirus pandemic, and even when they reopened, business was bad.

But shares of IMAX ( IMAX -4.85% ) dropped just 13% for the year, which is actually a lot better than its peers. And the stock is already on the road to recovery. If you bought in the dark days of March, when the share price fell all the way to $6, you've already tripled your money.

Is IMAX a buy around $18? Can the stock recapture its all-time high around $36? Here are three reasons 2021 might actually be an outstanding year for IMAX. 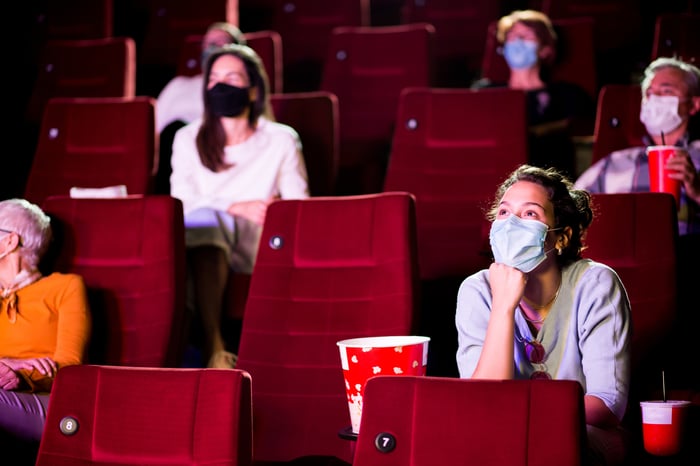 The 2021 movie slate is amazing

Richard Gelfond, IMAX's CEO, called the company's upcoming movie slate an "embarrassment of riches." That's because major releases like the upcoming James Bond film in 2020 were delayed and pushed into 2021.

Some of the tentpole releases IMAX plans to screen this year include the Bond film No Time to Die, Black Widow, Fast & Furious 9, Venom 2, Suicide Squad, Top Gun: Maverick, Shang-Chi, Dune, The Eternals, and Mission: Impossible 7. Other films that will likely get the IMAX treatment in 2021 include Morbius, Free Guy, Jungle Cruise, Mortal Kombat, The Tomorrow War, Ghostbusters: Afterlife, Spider-Man 3, The Matrix 4, and Sherlock Holmes 3.

It's possible, of course, that a few of those will get pushed into 2022, which is also shaping up to be a fantastic year. James Cameron's Avatar sequel is scheduled to drop in next December, and could hit the No. 1 spot in box office receipts in history.

IMAX is a uniquely powerful company in filmmaking

IMAX isn't a theater chain. It's a technology company that licenses its "image maximum" technology to theater chains. Thus, IMAX is an asset-light business with almost as much cash as debt.

A night in an IMAX theater is a more expensive ticket, but also a cheap price to pay for a visit outside the normal. It's an easy and inexpensive way to visit other worlds and cultures. And the company is synonymous with big-budget blockbuster movies. Many of the major Hollywood landmark films were shot on IMAX cameras, including films like The Dark Knight, the Avengers and Star Wars series, and the new Mission: Impossible films.

As James Cameron told Wired magazine: "Our goal with Avatar is to revolutionize live-action 3-D moviemaking, and it looks and sounds incredible in IMAX 3D. The larger field of view and powerful surround sound of an IMAX theater will immerse the audience in a way that cannot be experienced anywhere else."

In addition, IMAX is a worldwide business. Over two-thirds of its theaters are outside of North America. More than half of its theaters are in Asia. As movie industries develop in the rest of the world, IMAX will benefit tremendously. For instance, the No. 1 box office film of 2020 was not a Hollywood production, but a Chinese film, The Eight Hundred. And it was shot on IMAX cameras.

"Since reopening in late July, China has generated more than $1.7 billion of total box office," Gelfond said on the most recent earnings call. "IMAX's average weekly box office since reopening has rebounded to approximately 95% of our average weekly box office in the second half of 2019." IMAX is gaining market share in Korea, Japan, and Taiwan with films made in the home countries and distributed in IMAX theaters.

There's a pent-up demand to go out

Many investors are afraid that traditional movie theaters are a dying breed. What we are actually seeing is a division in cinema. Small, quiet, intimate movies are perfect for a small-screen experience in your living room. Some of the most powerful dramas have already shifted to the small screen.

On the other hand, if you want to experience an epic movie production, a small screen will never be large enough. More and more movie chains will transition to IMAX screens in order to survive and make money.

Right now in North America, a little over 1% of movie screens are IMAX screens. "IMAX accounts for approximately 450 out of a total of 42,000 plus screens," Gelford said on the earnings call. "In North America in 2019, only 5% of IMAX's box office was generated from the bottom 65% of multiplexes ranked by revenue. In other words, approximately 3,500 North American mid-to-low performing multiplexes out of 5,400 could disappear overnight, we believe that it would have no material impact on our business."

That's how the future is likely to play out. Unprofitable movie theaters will close. The number of big screens will shrink. More and more blockbuster films will play to IMAX crowds. And audiences will be amazed.

With a trailing P/E of 19 in this environment, IMAX is cheap given its position in the industry, and how massive the demand is going to be for big screen entertainment over the next year or two. People are sick of staying home, and they want to get out. IMAX is a buy right now, and the upside for this small-cap stock is significant.

Is IMAX the Better Multiplex Play Than AMC Entertainment?