Many investors were happy about the returns that their stock portfolios gave them in 2020. In particular, there were a huge number of stocks that doubled shareholders' money in the past year.

Coming into 2021, the search has been on to find the stocks that would generate the same kind of red-hot performance in the coming year. But as it turns out, it's taken less than two weeks for some companies to stand out from the crowd.

ReneSola (NYSE:SOL), 3D Systems (NYSE:DDD), and Globalstar (NYSEMKT:GSAT) have emerged as early stock market leaders in 2021. All three of them have doubled or more in the opening days of the new year, and smart investors are taking a closer look to see if there's even more upward momentum in store for their share prices. Below, we'll tell you everything you need to know about this trio of winners. 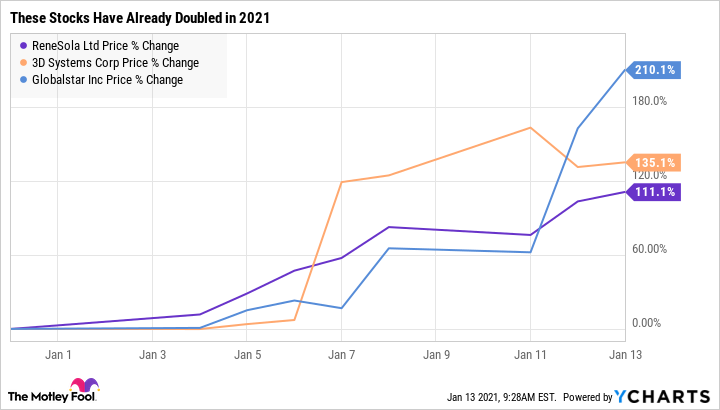 ReneSola is having its day in the sun

2020 was a good year for solar stocks, and ReneSola was a top performer. The stock moved higher by more than 700% last year, and as you can see above, it's getting another push higher in 2021.

ReneSola is a developer and operator of large-scale solar projects. The company has a global presence, operating with local teams in countries around the world. ReneSola has concentrated its attention on areas in which project profit margins are highest, and it's built up a strong market share in some key areas of Eastern Europe, as well as U.S. states such as New York and Minnesota.

ReneSola has had plenty of interest in solar projects, and 2021 has already brought a big one. A potential joint venture with a European asset management firm will allow ReneSola to finance upcoming projects across Europe.

In addition, investors have given their vote of approval to ReneSola's strategic plans. The company successfully sold 2.5 million shares in an offering at $16 per share, raising $40 million in capital. Shareholders were pleased to see the company raise that much cash, locking in gains and pointing toward a brighter future. If ReneSola puts that money to good use, it could help the stock continue to climb in the months to come.

3D Systems didn't have nearly as strong a year in 2020 as ReneSola, with stock price gains of just 20%. However, the 3D printing company perked up in a big way to start the new year, and that's reawakened some new excitement about its potential.

Much of the difficulty that 3D Systems has faced lately is getting enough capital to invest into its business. Until recently, it's had to rely on occasional stock offerings to raise cash, and that's diluted existing shareholders.

However, earlier this month, 3D Systems successfully sold its non-core software division. That sale raised $64 million, and as a result, the company will have ample capital and be able to avoid new sales of stock for the foreseeable future.

In addition, 3D Systems sales for the fourth quarter came in well ahead of what most had expected to see, with $170 million to $176 million of revenue representing a long-awaited year-over-year gain of as much as 7%. After having been under pressure for years, 3D Systems stock could keep climbing if the business generates further growth in 2021. 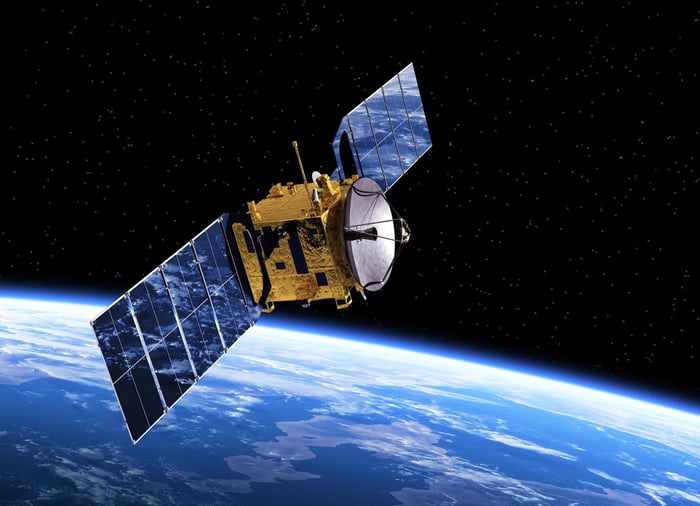 Finally, Globalstar shares have tripled so far in 2021. The stock has even briefly poked above the $1-per-share level for the first time in roughly three years. That's a big turnaround from the 35% drop it suffered in 2020.

Globalstar operates a network of satellites in low Earth orbit to offer communications services. Users can take advantage of the network for voice calls and data transmission. Yet despite the growth potential in that business, Globalstar's revenues have barely budged in the past several years, and consistent profitability has been elusive.

Investors are hoping that'll change based on a recent announcement from Nokia (NYSE:NOK). Nokia intends to use Globalstar spectrum at the Port of Seattle in connection with shipping terminal operations. Shareholders hope that this deal will lead to similar installations elsewhere.

Unfortunately, Globalstar hasn't been the big winner in satellite communication. Shares of rival Iridium Communications (NASDAQ:IRDM) are up much more sharply in recent years, and it looks like a better bet than Globalstar in the long run.

Just because a stock doubles in the first few weeks of the year doesn't make it an automatic buy. Among these three stocks, ReneSola seems to have the best long-term opportunities in a strong sector. 3D Systems is a viable turnaround candidate if it can get its business execution in better shape, while Globalstar needs a lot of work to succeed.

Investors can be assured that there'll always be stocks that double in a given year. By looking at ones that already have, you can unlock the secrets to success that will help you anticipate other stocks matching or surpassing their gains.