Nikola's road ahead is daunting, but at least there's a road.

Shares of embattled electric truck start-up Nikola (NKLA -1.06%) were trading higher on Thursday afternoon, following the publication of a Bloomberg article that took a sober look at the company's prospects after a difficult 2020.

Nikola had a rough 2020. Its stock soared last summer after it went public in one of the first of a wave of electric vehicle SPAC (special purpose acquisition company) merger deals. But the stock fell back to earth after a short-seller accused the company and founder Trevor Milton of exaggerating the state of its technology and misleading investors in September. Worse, the accusations had enough credibility to trigger federal investigations, drive away some potential key partners, and force Milton's departure. 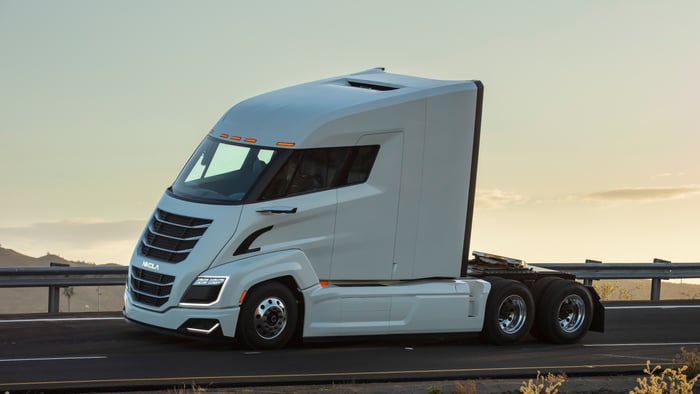 Founder Trevor Milton is gone, but Nikola is moving ahead with its plans to bring its electric semitrucks to market. Image source: Nikola.

What happens now? That's the question that Bloomberg's article poses. On the one hand, the company lost its founder, a lot of credibility, and some key partnerships in 2020. On the other hand, it still has money in the bank, a path to getting its trucks to market, and a team that might be able to pull it off.

It's a daunting path, though. As the article points out, building a network of hydrogen refueling stations is a key part of Nikola's go-to-market plan -- but having lost likely partner BP following the Milton scandal, it now has to try to build that network on its own.

Bloomberg's article was a reality check, but it might also have served to remind auto investors that Nikola is still around. It's still a company with the bones of a real business, albeit with some daunting obstacles to overcome, and it's trading at a price that is a lot more attractive than it was last summer.

We'll get a better view into Nikola's plan and prospects when the company reports its fourth-quarter and full-year 2020 results, likely in mid-February.