It has long been the largest player in the craft beer niche. Now, thanks to its success with other types of alcoholic beverages, it has outgrown the category.

Boston Beer (SAM -0.78%) will report fourth-quarter earnings sometime in February. Although it's been quite a while since the owner of Samuel Adams Boston Lager actually produced more beer than other alcoholic beverages, this shift marks a significant milestone for the industry.

Boston Beer has been the face of craft beer for several decades, and founder and CEO Jim Koch one of its top promoters, but with the brewer accounting for a substantial portion of the industry's annual production, the loss could signal an upheaval in the industry.

Yet even if Boston Beer isn't the most recognizable craft brewer on the market anymore, should that even matter to investors? Probably not, and here's why. 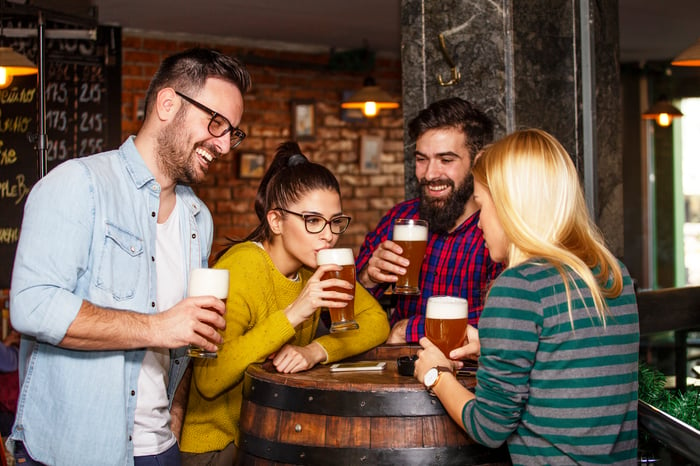 What it means to be small

To be considered a craft brewer, the industry trade group Brewers Association says a brewery has to meet three requirements:

There's no reason to think the brewer's fourth-quarter sales collapsed, so when the next earnings report arrives, we should see Boston Beer far exceed the Brewers Association's limit for craft brewers.

In the past, the trade group has moved the goalposts to allow Boston Beer to keep its craft brewer status. For example, in 2011, it raised the production limit from 2 million barrels to 6 million when the company was just about to break through the lower threshold.

It also changed the definition to open the classification to more brewers, such as in 2014 when it allowed for the use of adjuncts, or unmalted grains, as well as those that hadn't been partially germinated to release their enzymes. That permitted brewers like D.G. Yuengling & Son -- the country's oldest operating brewery -- Narragansett, Magic Hat, and Butte Creek to finally be included.

More recently, in 2018, the Brewers Association smudged the bright line again, saying a brewer didn't have to mostly brew beer, just that it had to produce some. That move, too, was made with an eye toward Boston Beer, which was by then producing less beer than other alcoholic beverages.

Yet as the craft beer icon prepares to cross the boundaries once more, it becomes difficult to argue that widening the limits again would result in a definition that still represents what craft brewing is at heart about.

Down to the last drop

The Brewers Association has decided that the 6 million barrel a year limit should only apply to beer, which is noteworthy since Boston Beer is still technically below that limit.

Traditionally, that part of the definition has been taken to mean a brewer's total production, and because those businesses were almost always producing nothing but beer, that wasn't an issue. However, to stay afloat and relevant as drinkers' tastes change, small brewers are adding hard tea, hard cider, hard soda, and most importantly, hard seltzer, to their lineups.

For Boston Beer, it's now those other adult beverages that comprise the bulk of its production, especially its Truly brand of hard seltzer, the second-best-selling seltzer on the market. The brewer has reported 23 consecutive quarters of declining depletions for its Samuel Adams brand, so it has been steadily producing less beer as well --far less than 6 million barrels a year. (Depletions are sales to distributors and retailers, and are considered an industry proxy for consumer demand.) In short, beer is becoming less relevant to its fortunes.

Investors shouldn't care. Boston Beer is estimated to represent about 8% of the craft beer niche's total volume, so if it ceases to be considered a craft brewer, that would significantly alter the Brewers Association's data. What it would not do is have any effect on Boston Beer's performance.

So long as the brewer continues to make beverages that people want to drink -- and Koch seems to have his finger on the pulse of  consumer preferences these days -- the company can be expected to deliver greater sales, bigger profits, and a rising stock price. That's something all investors can raise a glass to -- regardless of what beverage they prefer in it.