Please ensure Javascript is enabled for purposes of website accessibility
Log In Help Join The Motley Fool
Free Article Join Over 1 Million Premium Members And Get More In-Depth Stock Guidance and Research
By Rich Smith - Jan 15, 2021 at 11:33AM

Virgin Galactic (SPCE -5.20%) shares, which spiked higher yesterday along with most other space stocks, are retreating today -- down 6.2% in 10:15 a.m. EST trading. Partly, I suspect this is simple profit taking by traders cashing in their windfall profits of yesterday.

But there's another reason for Virgin Galactic stock to be falling, too. 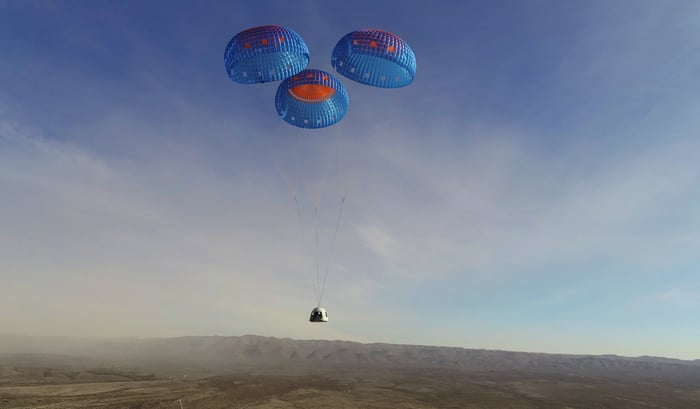 Virgin Galactic wants to become a space tourism company, you see, but it still has a ways to go before it can call itself that -- at least a couple more test flights with no one but crew aboard, then a test flight carrying company founder Sir Richard Branson to space and back, and then, finally, the ribbon cutting -- the beginning of commercial spaceflight operations for paying customers.

Factor in the time required to recover from a failed launch attempt in December, however, then finish the scheduled preliminary flights, and commercial operations probably can't begin before the end of Q1 this year -- maybe not even Q2. And here's the problem:

Yesterday, Jeff Bezos' Blue Origin space company conducted its fourteenth test flight of its New Shepard suborbital space tourism rocket. For the first time ever, the rocket carried a new capsule atop it, equipped with six seats and a test mannequin in what Blue described as its "stable configuration" (meaning there probably won't be any more upgrades needed before commercial operations begin). And in a surprising revelation, CNBC reported that this flight was one of two final test flights before New Shepard begins carrying people aboard.

Reporting to its followers on Twitter, Blue Origin described Thursday's test flight as "wholly successful." Now, reports CNBC, we have only to wait for a second test flight to go off six weeks from now, then wait six weeks after that to see "the first crewed flight" of New Shepard.

Touchdown of the crew capsule, completing what looks to be a wholly successful mission. #NewShepard

Will this be an actual commercial flight? I rather doubt it, as Blue Origin hasn't begun selling tickets yet, or even announced a ticket price. Most likely this will be a crewed test flight carrying only Blue Origin employees. But it does suggest that by April, Blue Origin will already have caught up to where Virgin Galactic is today and be on the cusp of starting its own commercial operations carrying Blue Origin tourists to space.

In short: Even if Virgin Galactic's lead hasn't disappeared entirely, it's certainly shrunk appreciably -- and that's why the stock is down today.