Those with big winning stocks in their portfolios need to understand the risks of failing to rebalance their stock portfolio.

Tesla (TSLA -6.42%) returned more than 720% for investors in 2020. That's a huge year by any standard, and holders should be very excited by that performance. However, for many, it creates an allocation problem that requires rebalancing.

As I see it, the worst mistake that Tesla investors can make is to ignore the need to diversify. This suggestion may fall on deaf ears for speculators or Tesla disciples, but it's a great time to sell a portion of your shares while retaining some for future growth.

The auto-maker grew aggressively in 2020

Tesla was one of the most popular stocks among investors coming into 2020, and many people held it as part of their portfolios. That stock has almost certainly grown to take up a much larger portion of their portfolios since the start of last year. A hypothetical portfolio that was 5% Tesla at the start of 2020, with the remainder spread between the S&P 500 and the NASDAQ, would now be roughly 25% Tesla due to that one position's excellent performance.

There's some dissent among Fool contributors and the investment community on this topic, but I'm a staunch advocate of diversification and rebalancing. This is especially important if stock performance is being driven by valuation inflation rather than fundamental growth. In the above example, investors established a volatile, high-growth position with 5% of the portfolio. Having exploded in value, Tesla now has less upside potential and more downside risk. To replicate this year's performance, the company would have to grow to $5.6 trillion in value. Tesla is likely to continue performing well, and that huge valuation may indeed be attained eventually. However, it's going to take a while, and I expect that we'll go through some market corrections before that day comes.

Tesla holders should be excited-the stock delivered your gains ahead of schedule without a corresponding rise in sales, and there's a good chance you'll be able to purchase more again later at a less aggressive valuation.

Even if you fundamentally agree that rebalancing is important, the actual moves required to rebalance may be difficult to accept. Tesla is looking at 30% sales growth in 2020, and it achieved quarterly profits for the first time last year. Analysts are forecasting rapid growth again in 2021.

It might seem strange to sell a stock that's delivered great returns while reporting strong fundamentals and looking at another great year. However, that's exactly what you have to do to effectively rebalance. 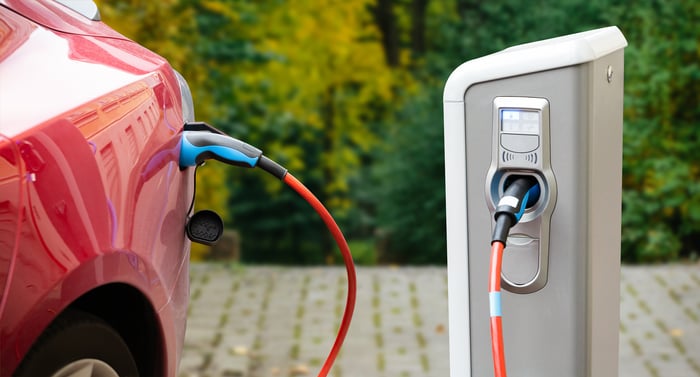 The bull narrative for Tesla has not been disrupted. In fact, the auto maker's sustained growth and recent profits validate the optimism about the stock. Why would you need to sell some, if that's the case? Because risk is still present here.

Tesla trades at a forward price-to-earnings (P/E) ratio of 175, a price-to-sales of 24.5, and a price-to-book ratio of 41.7. Investors should expect promising growth stocks to attract high valuation ratios like these, but Tesla holders need to recognize that significant amounts of future success are already assumed in this price. Continued strong results are necessary to justify the current price. Any indication that Tesla might fall short of the market's optimistic forecasts could send shares tumbling, even if the company keeps growing.

That might not be an issue for bullish long-term holders who just want exposure to the eventual market leader they expect Tesla to become, but others recognize the opportunity to redeploy that capital into other stocks that can deliver strong returns without as much risk concentration. Growth investors can sell some Tesla shares and use the proceeds to buy several other high-growth stocks. Recent big-name IPOs and hot stocks from industries such as e-commerce, cybersecurity, or telehealth can offer tremendous upside along with the opportunity to dilute the risk that any single stock performs poorly.

Rebalancing shouldn't mean completely abandoning a good position, either. It makes sense to lock in some gains and retain a smaller position in Tesla to take advantage of potential future growth. Investors might be nervous about Tesla's aggressive valuation, but that company may well become a leader in multiple major industries for the next several decades. Most investors who allocated a certain proportion of their portfolios to Tesla last year should feel comfortable allocating a similar percentage of their holdings to the stock this year.

Tesla may have attracted large numbers of speculative growth investors, and they might not like to hear it, but this is a great moment to take some gains and reinvest them elsewhere. The stock has outperformed the rest of the market so drastically over the past 12 months that it has left portfolios over-exposed to its performance. This is especially risky with Tesla's high valuation ratios. Bullish investors should keep some of this stock in their portfolios to benefit from future growth, but there are more than enough high-potential companies out there to warrant diversification.

Can I Buy Shares of Tesla in My Roth IRA?

Should You Invest in Tesla Before the Stock Split?