The video-streaming powerhouse will report its latest financial results, and it will take a blowout to get the stock price back to the all-time highs it hit in July.

There's pressure on Netflix (NFLX 0.58%)every time it steps up with its latest financials. The world's leading premium video-streaming service has been one of the market's best investments -- a 465-bagger since it went public 19 years ago -- so every report carries a lot of weight. With new subscriber targets to hit and fresh guidance to offer, it must keep on delivering if it wants to remain a Wall Street darling.

And a delivery is due: Netflix will report its results for the fourth quarter shortly after Tuesday's market close. 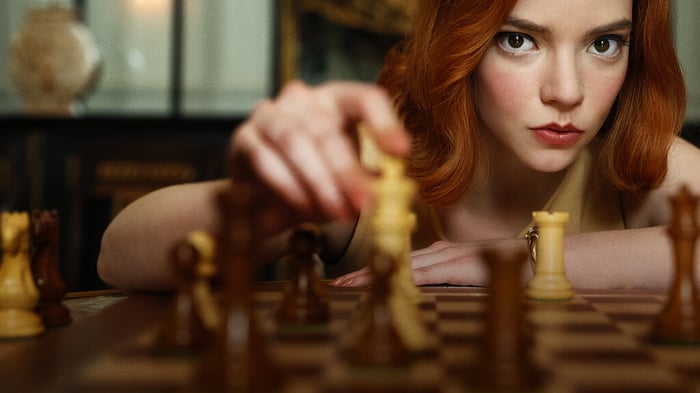 One could argue that expectations aren't high for Netflix heading into this report. Some publicly traded streaming platforms are hitting new highs, but Netflix stock peaked more than six months ago. It enters this holiday-shortened trading week 13% below last summer's all-time high.

Weighing on Netflix is the narrative that the surge in subscriber numbers that occurred in the first half of 2020 largely came from pulling forward the decisions of people who would've hopped on the platform later in the year. After adding 25.9 million global streaming net subscribers through the first six months of 2020, when the pandemic made us all homebodies, the company attracted just 2.2 million more in the third quarter. Back in October, management forecast that the company would grow its active paying audience by 6 million accounts in Q4. In short, Netflix expects to go from padding its numbers by 25.9 million in the first half to just 8.2 million in the second half.

That's really nothing to complain about though. Netflix should report that it topped 200 million global streaming paid memberships during Q4. The challenge at this point is keeping them close. A Business Insider article late last week -- leaning on exclusive data -- reported that usage among domestic subscribers dipped during the quarter. The same tracking data showed that usage continues to climb internationally, where Netflix has been drumming up most of its subscriber growth in recent years. North America accounts for just 37% of its audience now.

The quarter should still be solid. Folks aren't likely to be canceling Netflix while the pandemic continues to rage, especially when it seems to be home to many -- if not most -- of the trending shows and movies. The real question for investors is what Netflix sees in its crystal ball. Will its latest price hike -- the fifth time that it has boosted the price of its streaming service domestically in the past seven years -- sting the way that its 2019 boost did? Netflix also lost rights to The Office this month, a series accounting for nearly a billion hours of streaming on the platform in 2020. Will it suffer defections from folks who subscribed because they are dedicated to revisiting the antics at the fictional Dunder-Mifflin paper company?

The marketplace is getting crowded with tech giants and media companies hungry for a chunk of Netflix's audience. It has usually been a mistake to bet against the streamer during earnings season, but not every report has been perfect. Management will need to ease concerns that the rapid rise of newer services is eating into its business. Once again, there's never a dull quarter when it comes to Netflix.