Please ensure Javascript is enabled for purposes of website accessibility
Log In Help Join The Motley Fool
Free Article Join Over 1 Million Premium Members And Get More In-Depth Stock Guidance and Research
By Rich Smith - Updated Jan 19, 2021 at 10:15AM

"If at first you don't succeed, try, try again" goes the old saying -- but Virgin Orbit only needed one more try to succeed. Several months after its first attempt to send its LauncherOne rocket into orbit from midair failed in May, Virgin Orbit successfully put a payload of 10 satellites into orbit on Jan. 17.

The successful launch began at 1:41 p.m. EST Sunday, when the Cosmic Girl modified Boeing 747 mother ship took off from Mojave Air and Space Port in California. About one hour later, the company tweeted out confirmation that Cosmic Girl had made a clean release of its LauncherOne rocket in midair, and the first stage of the rocket had ignited. Four minutes later, that stage completed its burn and dropped off (this was the point at which the previous mission had failed), and the second stage ignited. 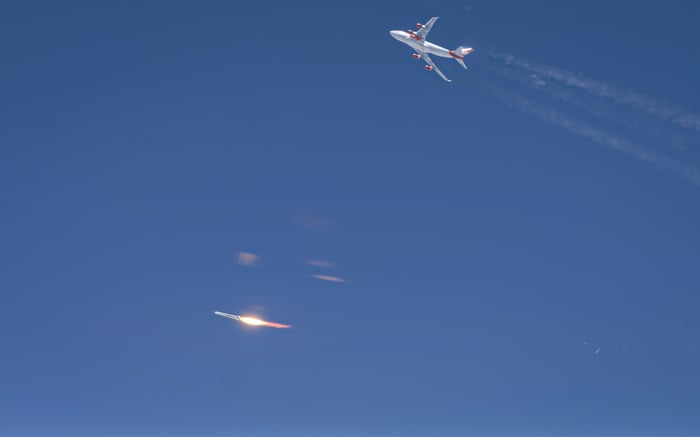 It took a few more hours to confirm that the rest of the mission had proceeded as planned. The Cosmic Girl mothership landed back home, safe and sound, and the 10 satellites that NASA had contracted Virgin Orbit to launch were all placed in the correct orbits.

Now that it has proved itself capable of reaching orbit, Virgin Orbit becomes the second company conducting midair rocket launches, competing with Northrop Grumman (NOC 0.84%), with its Lockheed L-1011 Stargazer mother ship and its Pegasus rockets.

A third company, Stratolaunch (bought out of bankruptcy last year), previously had designs on entering this market as well, but has since shifted its focus to testing hypersonic rockets and vehicles launched midair.

Virgin Orbit is a sister company to, but not the same company as, Virgin Galactic (SPCE -1.61%), which conducted an IPO via a special purpose acquisition company in 2019.