Please ensure Javascript is enabled for purposes of website accessibility
Log In Help Join The Motley Fool
Free Article Join Over 1 Million Premium Members And Get More In-Depth Stock Guidance and Research
By John Rosevear - Updated Jan 19, 2021 at 11:31AM

A nod from Wall Street and a new driver-assist system are giving shares a boost.

Shares of Chinese electric-vehicle maker Xpeng (XPEV 1.90%) were trading higher on Tuesday, on a somewhat bullish note from Wall Street after the company unveiled its newest advanced driver-assist technology on Friday. As of 11:00 a.m. EST today, Xpeng's American depositary shares were up about 10.6% from Friday's closing price.

There are two news items pushing Xpeng's shares higher today. First, Xpeng revealed a beta version of its Navigation Guided Pilot, a hands-free highway-driving system, last Friday in Guangzhou, China. The company said that over 100 journalists had tried the system in a series of media road tests last week, to positive reviews. Xpeng said that the new system has lower driver-intervention requirements than rivals' systems, that it covers a wider range of driving scenarios, and that it will be rolled out via over-the-air updates to customers in China over the next few weeks. 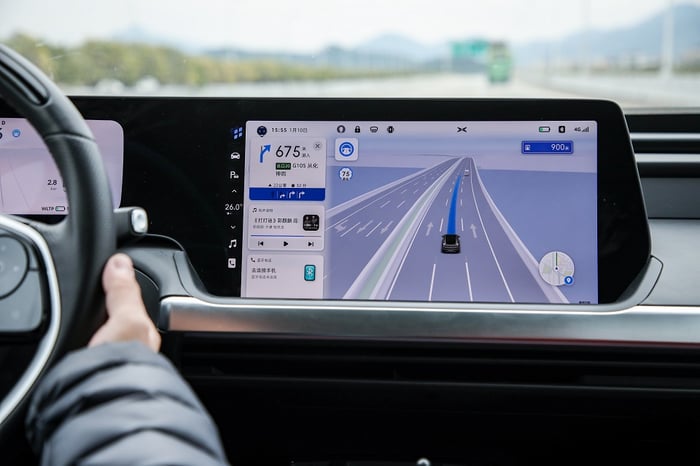 Xpeng will roll out its new hands-free highway-driving system over the next few weeks. Image source: Xpeng.

Separately, on Tuesday morning, Jefferies analyst Alexious Lee initiated coverage of Xpeng with a hold rating and a price target of $54.40. Lee said that while the company has "very strong exposure" to fast-growing demand for high-tech vehicles in China, his forecast of 120% sales growth in fiscal 2021 is lower than Wall Street's consensus -- hence the hold rating.

Simply put, Lee thinks that Xpeng is quite competitive, but that the market may not grow as quickly as others have forecast. He sees better growth, 129% year over year for Xpeng in 2022, when the rate of market acceptance accelerates.

Auto investors will learn more about Xpeng's outlook for 2021 when the company reports its fourth-quarter and full-year 2020 earnings, likely in mid-February.