Please ensure Javascript is enabled for purposes of website accessibility
Log In Help Join The Motley Fool
Free Article Join Over 1 Million Premium Members And Get More In-Depth Stock Guidance and Research
By Bram Berkowitz - Jan 20, 2021 at 8:45AM

The bank is trying to drastically improve its efficiency ratio to get more in line with peers, but it could take some time and require more than just expense cuts.

On the bank's most recent earnings call, Wells Fargo (WFC -1.01%) CEO Charlie Scharf revealed the widely anticipated first details behind what could end up being a transformative cost savings initiative for the bank. The initiative is aimed at improving Wells Fargo's dreadfully high efficiency ratio in order to get more in line with its peers, which would certainly make the bank's stock price and valuation more competitive. Let's take a look at what we just learned about the initiatives Scharf laid out, and what kind of progress we can expect to see in 2021.

The efficiency ratio is a closely watched metric by bank investors that is a measure of a bank's expenses expressed as a percentage of total revenue, so the lower the ratio, the better. For instance, a 60% efficiency ratio means a bank spent $0.60 to generate every $1 of revenue. Since Wells Fargo's phony accounts scandal was revealed in 2016, the bank has seen expenses soar in order to deal with lawsuits, fines from regulators, and the need to invest in its regulatory infrastructure so it can one day get back into compliance with regulators.

On the other end of the efficiency ratio, revenue has suffered as well. In 2020, revenue really took a hit, as Wells Fargo faced higher credit costs due to the coronavirus pandemic. The low-rate environment also reduced interest income on loans. To top it all off, Wells Fargo is still operating under a $1.95 trillion asset cap that prevents it from significantly expanding the balance sheet to offset the lower profit margins on loans. All of these factors led to an 80% efficiency ratio at the bank in 2020 -- competitors such as JPMorgan Chase, Bank of America, and Citigroup are usually around 60% or below.

Scharf has said in the past that getting into line with competitors would mean cutting about $10 billion in annual expenses. On the bank's most recent earnings call, management laid out about $8 billion in gross cost savings the bank can realize over the next three to four years. 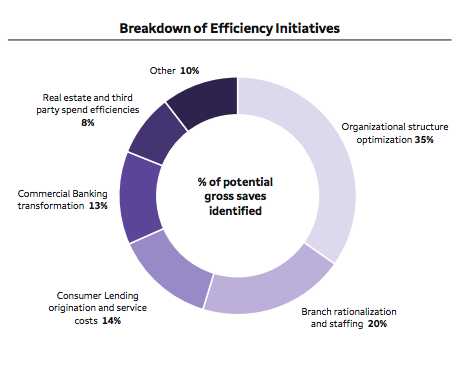 The biggest areas of savings will be in optimizing the bank's organizational structure by doing things like reducing layers of management and shrinking the bank's branch footprint, with another 250 branches expected to be consolidated in 2021. Wells Fargo also plans to reduce its corporate footprint and transform its prized commercial lending operations by consolidating commercial lending platforms and automating processes.

This will certainly not be a quick process. The $8 billion in gross efficiencies is not an $8 billion reduction in annual expenses. For instance, the bank said it plans to achieve $3.7 billion of the planned gross cost savings in 2021. However, it will need to invest about $2.2 billion of those cost savings back into its operations, resulting in a $1.5 billion net reduction of expenses in 2021. If it goes at that pace, it would take the bank more than six years to achieve annual cost savings of $10 billion. However, keep in mind that those investments back into the bank's operations will likely result in cost savings as well, so the time period for all the cost savings is still quite uncertain, but definitely not immediate.

Currently, the average consensus among analysts for revenue at Wells Fargo is $71.3 billion in 2021, which would give Wells Fargo somewhere around a 74% efficiency ratio ($53B/$71.3B). That's better than the 80% efficiency ratio the bank did in 2020, but still far away from being anything decent.

The expense initiatives are certainly going to pay off long term if the bank can achieve them, but for more near-term reductions in the efficiency ratio, revenue has an important role to play. Projected revenue of $71.3 billion is a far cry from the roughly $85 billion in total revenue the bank did in 2019. It's hard to currently know what a normal revenue run rate will look like going forward because the bank is selling a number of smaller units that it has determined are not core to its U.S. banking franchise. Wells Fargo is also embarking on a new strategy that involves ramping up its investment banking operations.

Obviously, getting the $1.95 trillion asset cap removed will go a long way because Wells Fargo will be able to make more loans and generate more interest income. Progress on the investment bank gaining market share will be important to watch as well.

If the bank can return to a more normalized run rate on revenue like the $85 billion in 2019 and keep expenses around $53 billion, that would result in an efficiency ratio of roughly 62% ($53B/$85B), which is certainly headed in the right direction. But that's also a hard estimate to make because we really don't know what a realistic run rate for revenue is right now, and increasing revenue usually comes with added expenses.

Not going to happen overnight

Removing this level of expenses and improving the efficiency ratio to get in line with peers will not happen overnight. The $8 billion in gross cost savings will take three or four years to achieve and it could very well be at least another year until the asset cap is removed, if not more.

Don't only watch the bank's progress on expenses, but also on revenue, as both drive the outcome of the efficiency ratio. If Wells Fargo ends 2021 with an efficiency ratio percentage in the low 70s, that means management at the bank likely achieved all of its planned cost savings in 2021, and the bank beat analysts' current estimates for revenue.