Please ensure Javascript is enabled for purposes of website accessibility
Log In Help Join The Motley Fool
Free Article Join Over 1 Million Premium Members And Get More In-Depth Stock Guidance and Research
By Adria Cimino - Jan 21, 2021 at 6:45AM

These companies' vaccines could bring in billions of dollars in revenue.

Both Moderna and Pfizer have brought coronavirus vaccines to market, but there still are plenty of opportunities to bet on players that haven't yet brought their vaccines across the finish line. I'm referring to companies that continue to study their candidates in clinical trials. Their shares could rise significantly if they report positive data and eventually win Emergency Use Authorization from the U.S. Food and Drug Administration (FDA). Novavax (NVAX -3.84%) and Vaxart (VXRT -3.44%) are in just this situation.

Shares of these two clinical-stage biotech companies surged 2,600% and 1,500% respectively last year as they advanced their vaccine programs. In the fall, Novavax launched a phase 3 study, while Vaxart began its phase 1 trial. We can expect interim data from both companies soon.

But which is the better coronavirus stock to buy right now? Let's take a closer look at each. 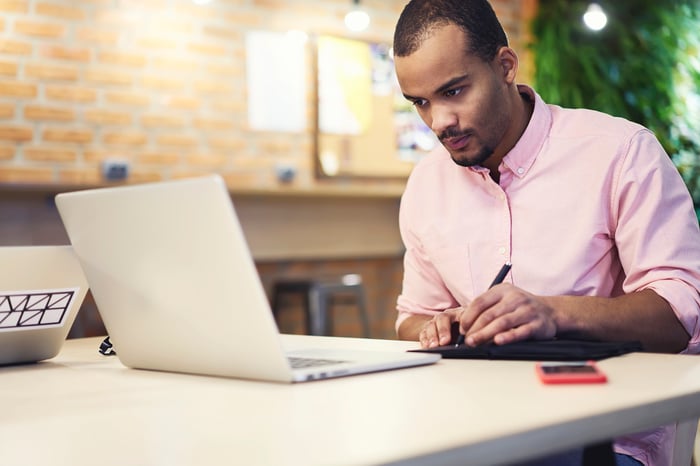 Novavax's investigational vaccine is involved in two phase 3 studies. The company began its first one in September in the U.K. That study completed its enrollment of 15,000 volunteers in November. More than 25% of those participants are older than age 65, and a number of them have medical conditions that qualify as comorbidities. Severe cases of coronavirus have been most common in these populations, so it's particularly important to show the vaccine is safe and efficacious for them.

Novavax expects interim data from that trial as soon as early in the first quarter of this year. The company would use this to support requests for emergency use in various countries. If all goes smoothly, its vaccine could enter the market during the first half of 2021. That would result in possibly billions of dollars in revenue this year.

The company hasn't released the price of an eventual vaccine, but using the $16 per dose that the U.S. government paid as a guide, and applying this to the orders Novavax has announced so far, offers us an estimate: The vaccine could generate more than $5.3 billion in sales.

Novavax launched its second phase 3 study in the U.S. and Mexico in December, and aims to use data from this trial as part of its submission for full approval. Novavax is ramping up to produce 2 billion doses annually as of the middle of this year. And it expanded its campus with 122,000 square feet of additional space to develop and manufacture vaccines.

Vaxart's vaccine candidate is at an earlier stage than Novavax. Vaxart began a phase 1 study in October and completed enrollment a month later. The study aimed to include 48 healthy volunteers ages 18 through 54.

In this trial, we'll learn whether the Vaxart candidate is safe to use in humans. We'll also get an initial look at the participants' immune responses post-vaccination. What makes Vaxart's investigational vaccine most interesting is how it's delivered: The potential product is a tablet that's administered orally.

This is good news for those of us who don't like shots, and it's also good news for healthcare providers. The tablet is room-temperature stable, which makes it easier and less expensive to transport and store. We could imagine such a vaccine playing a big role in widespread vaccinations across populations -- especially in areas with fewer cold-chain tools and resources.

It's clear that if Vaxart's clinical data shows the candidate is safe and effective all the way through phase 3 trials, the eventual product could be a game changer -- for the coronavirus market and the company. Vaxart's tablet could take a big share of the market due to its ease of use. And that would spell billions of dollars in revenue.

All of this sounds great. But right now, Vaxart faces one big risk: We don't yet know if the vaccine candidate will work in humans. If Vaxart announces positive data even in the phase 1 trial, the shares could soar. But a phase 1 failure could be disastrous for the stock. 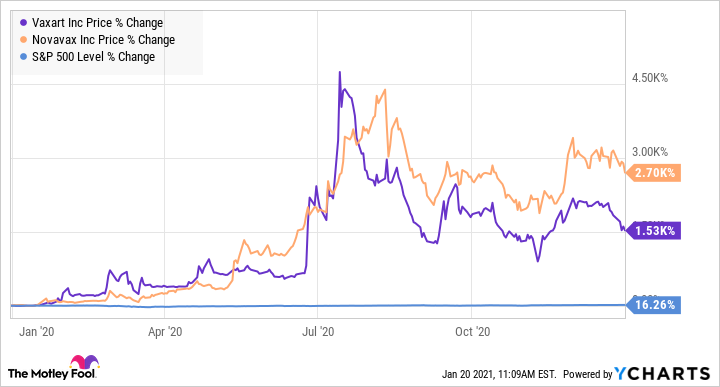 Which vaccine maker is best?

Novavax also carries risk. Failure of an investigational product can come at any time -- even as far along as phase 3 trials. And Novavax's share performance, like that of Vaxart's, is linked to coronavirus news.

When it comes to share-price potential, Vaxart offers more room for growth -- if all goes well in clinical trials. Vaxart's $733 million market value (versus Novavax's $8.1 billion) means it's easier for the stock price to double or triple. Today, Vaxart trades for about $7 a share, while Novavax trades for $124.

Still, until Vaxart reports data from its first human trial, it remains best left to the most aggressive of investors, leaving Novavax the better buy for the rest of us today. The biotech company is closer to the vaccine race finish line. And it has supply agreements and capacity, showing it can handle the commercialization phase.

I don't expect another four-digit percentage gain from the stock this year, but that doesn't mean Novavax's growth story is over.