Please ensure Javascript is enabled for purposes of website accessibility
Log In Help Join The Motley Fool
Free Article Join Over 1 Million Premium Members And Get More In-Depth Stock Guidance and Research
By Adam Levine-Weinberg - Jan 21, 2021 at 8:26AM

The rally has continued this week, after GM and its Cruise autonomous vehicle (AV) subsidiary announced a partnership with Microsoft (MSFT 1.29%). GM stock surged 10% on Tuesday and continued rising on Wednesday. Let's take a look at what the latest announcement means for the auto giant. 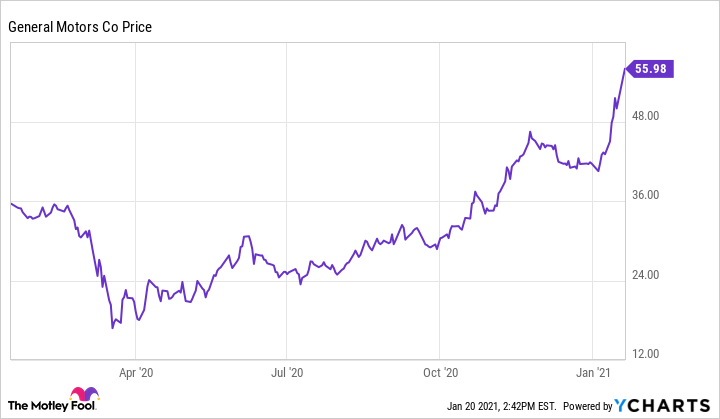 GM and Cruise partner with Microsoft

On Tuesday, GM and Cruise announced that they were forming a strategic relationship with Microsoft. The centerpiece of the deal is an agreement for Cruise to use Microsoft's Azure cloud and edge computing platform to help it commercialize AVs. Microsoft will also become the preferred public cloud provider to GM and Cruise.

The exact scope of this strategic relationship remains murky. However, it's clear that developing and deploying AVs will require a massive amount of number-crunching behind the scenes. Microsoft is one of the few companies that can provide the computing power Cruise will need. Microsoft's cloud computing services also could help improve GM's design and manufacturing operations. More details on the scope of collaboration between Cruise, GM, and Microsoft will likely emerge over time.

Cruise gets a new round of investment

In conjunction with forming this strategic partnership, Microsoft will participate in a new $2 billion funding round for Cruise, alongside GM, Honda, and various institutional investors. This will bring Cruise's post-money valuation to $30 billion.

Cruise's value has increased rapidly over the past five years. GM bought the startup in May 2016 for cash, stock, and performance-based awards valued at $659 million. Two years later, SoftBank's Vision Fund made a major investment in Cruise at an $11.5 billion valuation. Honda invested $750 million in Cruise later that year at a valuation exceeding $13 billion. The valuation then rose to $19 billion following a $1.15 billion funding round in May 2019, which marked Cruise's most recent capital raise prior to 2021. GM has pumped billions of dollars into Cruise since acquiring it. Still, the value of its investment has increased tremendously in just a few short years. As of the end of 2019, GM reported owning 82.7% of Cruise, excluding shares SoftBank will receive in exchange for providing $1.35 billion of additional funding when Cruise is ready to commercialize its technology. Other sources have put GM's effective ownership percentage as low as 69%, but even that would make GM's stake in Cruise worth at least $20 billion today.

Another reason why GM stock is still undervalued

Investors seem to forget about Cruise when it's not in the news, but the AV pioneer's skyrocketing valuation is a key reason why GM shares may have more room to run.

Even after doubling over the past six months, GM stock trades for less than 10 times the company's projected 2021 earnings. That seems awfully low, even for the auto industry, given that the U.S. auto market has entered an upswing. GM's valuation seems even more absurd after factoring in the value of its investment in Cruise: roughly $15 per share, assuming a 70% ownership stake. This implies that the market is valuing General Motors' core business -- including its EV platform -- at less than seven times forward earnings.

Perhaps GM stock shouldn't be valued in line with the S&P 500 average multiple of 24 times forward earnings. However, there's a ton of room for the share price to rise further, even if GM continues to trade at a discount to the broader market for the foreseeable future.