Please ensure Javascript is enabled for purposes of website accessibility
Log In Help Join The Motley Fool
Free Article Join Over 1 Million Premium Members And Get More In-Depth Stock Guidance and Research
By Rich Duprey - Jan 21, 2021 at 7:19AM

Higher sales are likely ahead, but the stock has gained a lot of ground over the past year.

Hasbro (HAS -1.70%) battled back from the drubbing it took from the COVID-19 pandemic last year, but its stock still ended 2020 down 11% from where it began the year.

Toys were a surprisingly weak category, considering so many people were at home for most of the year. However, the toymaker's business is so intertwined with other segments of the economy that its closure dramatically affected results.

As we're now starting to see things move slowly back toward normal, it's a good time to see if that signals Hasbro stock is now a buy. 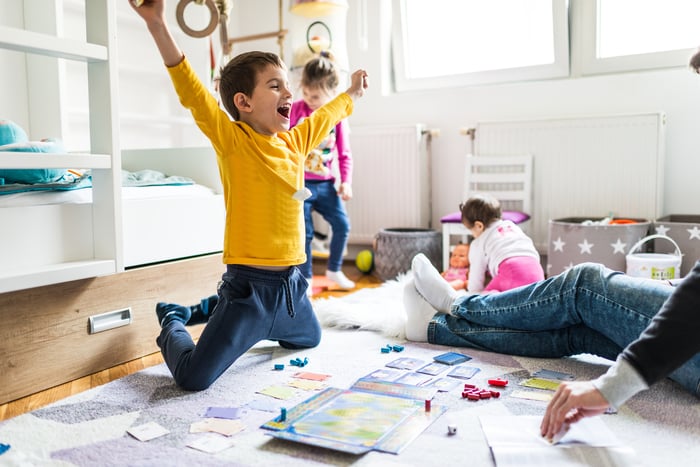 The toymaker's gaming section posted higher sales across the first three quarters of 2020, as brands like Magic: The Gathering, Jenga, and even the classic roleplaying game Dungeons & Dragons became star standouts.

Yet a lot of Hasbro's properties are also tied to external stimuli like movies and social gatherings, all of which just about completely went away in 2020.

Transformers, for example, tend to perform like gangbusters when a new movie is released, while Nerf would presumably have more of a social aspect to it. Both of them are part of Hasbro's "franchise brands" segment, which accounts for about half of the toymaker's annual revenue, and they woefully underperformed last year, helping drag down the total.

That was also the case for Hasbro's partner brands segment, which houses brands from Disney (DIS -0.71%), Marvel Comics, and Star Wars. In 2019, when Captain Marvel, Avengers: End Game, and Star Wars: The Rise of Skywalker were all released, division revenue soared 23% year over year. Partner brands represent over 20% of Hasbro revenues, or one-fifth the total.

With theaters shut and movie studios having delayed film releases into 2021, it's not surprising these units lagged. It also suggests why this year might be a big one for Hasbro.

Studios are going to take their movies either to theaters or to their streaming services, or both. That should unleash new demand for toys based on the programming.

Last year the surprise Disney+ series hit The Mandalorian sparked a rise in sales of Baby Yoda toys. With the second season released during the fourth quarter and being every bit as good as the first season (the Luke Skywalker reveal in the last episode had fans cheering), investors can expect a similar spike when Hasbro reports results next month.

The rollout of vaccines should also improve social interaction, allowing other Hasbro brands that have more of a communal backbone to them to excel once more as well.

There are plenty of reasons to be optimistic that Hasbro's toys and games business will be, well, back on top of its game, but has the market priced all of that into Hasbro's stock?

Hasbro's shares trade at 34 times trailing earnings and 22 times next year's estimates. And though the toymaker has still been a prodigious generator of free cash flow during the downturn, its stock goes for 52 times the cash profits it produces.

Rival Mattel (MAT -1.53%) is similarly priced at such lofty valuations, as is much of the leisure segment of the consumer discretionary market. Still, analysts forecast that Hasbro will grow earnings by less than 9% annually for the next five years, a low rate for a stock with such a high sticker price.

So even a we look forward to business returning to normal, or even improving, making Hasbro a good long-term business, investors looking for a good value today should hold off for a better opportunity tomorrow.