Please ensure Javascript is enabled for purposes of website accessibility
Log In Help Join The Motley Fool
Free Article Join Over 1 Million Premium Members And Get More In-Depth Stock Guidance and Research
By Billy Duberstein - Jan 22, 2021 at 7:20AM

Don't be tempted by this overhyped streaming-TV play.

One of the more controversial stocks in the market is fuboTV (FUBO 1.89%). Since going public at $10 in October, the sports-focused virtual MVPD (for "multichannel video programming distributor") soared as high as $62 in December before dropping back to the $30 level today.

Clearly, it has caught the attention of growth investors with its impressive top-line and subscriber gains in the latter part of 2020. Investors appear to be grouping the streaming upstart with other successes in the programmatic advertising, over-the-top streaming, and connected-TV space, betting that fuboTV could be the next big winner.

But with the stock price having now tripled, there are numerous reasons to stay away from these high-risk shares. Here are three big ones. 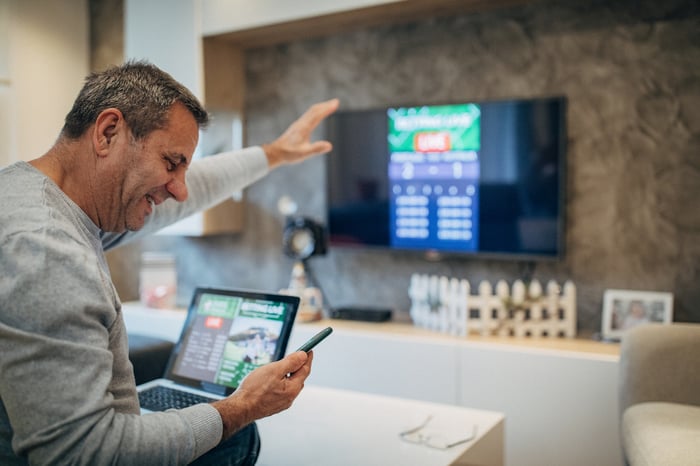 That's because the networks that carry sports rights charge a lot for the privilege, for fuboTV as well as its competitors, and that dynamic isn't going to change. In fact, in order to make room for ESPN last summer, it had to drop the Turner networks, Adult Swim, CNN, and others, while also raising prices. But with the NFL season soon ending, fuboTV will now be without a lot of NBA and March Madness games that run on the Turner networks. That could be a headwind for first-half subscribers.

While management has pointed to positive and increasing contribution margins, the manner in which fuboTV calculates contribution margins remains highly suspect, with the company recognizing deferred revenue for future periods but not the associated future costs. When analyzing unprofitable companies and new IPOs without a long track record, it's probably best to trust the GAAP metrics provided on the official income statement, not "adjusted" figures conjured up by management.

Unfortunately, it's going to be hard for fuboTV, which doesn't really have any proprietary content versus other virtual MVPDs, to improve its subscriber gross losses. In order to expand margins, the company is banking on advertising revenue to make up the difference. But ads only made up 12% of revenue last quarter, so there is a long way to go. Given the competitive nature of the media ad business, it's unclear how much profitable ad revenue it can really add.

In addition to targeted ads, the other way fuboTV hopes to add profitability is in sports betting -- the second reason for caution.

Risk No. 2: fuboTV soared on online gambling dreams; reality could be a different story

Part of the reason for fuboTV's meteoric fourth-quarter rise was its acquisition of Balto Sports in December. Similarly, the spike off recent lows came on the heels of a second sports-betting acquisition in Vigtory.

However, both companies are tiny, without operational products or users. Analyst Rich Greenfield noted that Balto didn't even have revenue, product, or a website at the time of acquisition, and that Vigtory has only 12 employees.

Since Balto made contest automation software, the initial thought was that fuboTV would initially turn the asset into a free-to-play fantasy-type sports game, with potential sports betting in the future.

But with the acquisition of Vigtory, which was founded in 2019 and produces sports betting software, it appears fuboTV aims to go toe-to-toe with large competitors like DraftKings, FanDuel, and the ascendant Barstool Sports in building an end-to-end sports betting app.

Then there are other ambitious, well-funded recent entrants like the BetMGM app from MGM Resorts, or the recent tie-up between Sinclair Broadcast Group and Bally's, which has beaten fuboTV to the punch in linking live sports television to a full-service sports betting app.

The market appeared to price in upside from sports betting on the announcements of the Balto and Vigtory acquisitions, but with no product yet available, and entrenched, well-funded competitors already established, it could be hard for fuboTV to gain a foothold in this new industry.

Some current investors also may not be aware of even fuboTV's current share count. Many investing websites still list its shares outstanding at 67.56 million, while the company said in its third-quarter release that all shares would total 112 million on a fully converted basis.

But the actual diluted share count is higher. According to the last 10-Q, the outstanding convertible preferred stock, stock options, and outstanding warrants would add 92 million more shares to the third-quarter share count of 67.5 million, putting the actual count around 159 million.

That puts the company's market cap around $4.8 billion, not the $2 billion listed on several investment websites today, which still have only the basic third-quarter share count. And if fuboTV pays for Balto and/or Vigtory in shares (likely, given the cash burn at the company), that share count will continue to climb, diluting shareholders further. Bearish analyst Rich Greenfield estimates that the sports betting initiative could require another $1 billion, which would dilute shareholders by another 40 million shares at a theoretical price of $25.

Too rich and risky for my blood

Investors seem to have lumped fuboTV in with other hot plays in programmatic ad software, or higher-margin platforms like Roku (NASDAQ: ROKU). But it seems like a low-margin "me too" product without any proprietary content, and it's trying to create another "me too" product in another very crowded and competitive field -- sports betting -- that will require significant investment.

I'm hard-pressed to find a viable path to profitability anytime soon for the company, which will likely continue to bleed cash as it tries to compete. Investors should be cautious about fuboTV, and view it as a highly speculative lottery ticket that could also decline significantly if its big ad- and gambling-fueled dreams fail to materialize.