Please ensure Javascript is enabled for purposes of website accessibility
Log In Help Join The Motley Fool
Free Article Join Over 1 Million Premium Members And Get More In-Depth Stock Guidance and Research
By John Ballard - Jan 22, 2021 at 10:54AM

The rapid rise of Mickey's streaming business has surprised the most optimistic investors, but the shares may still be undervalued.

Walt Disney (DIS -0.70%) entered calendar 2020 with media networks and theme parks comprising most of its annual revenue. But during the pandemic, Disney's parks, experiences, and products segment reported more than $3 billion in operating losses, which is quite a blow for a segment that contributed $6.7 billion in operating profit in fiscal 2019.

All said, Disney's stock chart over the last year looks like the Big Thunder Mountain ride at Disney World, but the worst appears to be over. One analyst believes that Disney's streaming services, including Hulu, ESPN+, and Disney+, will exceed Netflix (NFLX 1.56%) in total subscribers by 2023. If that happens, Disney's share price could have much more upside over the next five years, after delivering a decent 21% return on investment over the last 12 months.

Streaming growth takes over the narrative

With theme parks on the verge of returning to normal operations, and Disney's streaming services adding subscribers at a fast clip, investors have started to value one of the most iconic consumer brands in the world like a growth stock.

Disney shares currently fetch an expensive-looking price tag of 96 times forward earnings estimates. But traditional measures of value, such as the price-to-earnings ratio, don't mean much with Disney's profits under pressure.

Over the last four quarters, Disney lost $2.8 billion across the entire business. In addition to the losses from theme parks, canceled sport events have pressured advertising at Disney's media networks, and investments to support the content pipeline at Disney+ mean the service won't swing a profit until fiscal 2024, based on management's guidance.

Content spending across Hulu, ESPN+, and Disney+ is expected to reach an annual total of between $14 billion to $16 billion by fiscal 2024. That still may not match the level of Netflix's content spending, which totaled $13.9 billion in 2019. Netflix will undoubtedly increase its content investment over time, as competition heats up. However, Disney+ is growing faster than Netflix, having already reached 86.8 million subscribers in its first year.

Disney expects investments in new content, including dozens of original series coming from Star Wars, Marvel, Disney studios, and Pixar, to accelerate the growth of Disney+ over the next few years. Management forecasts total subscribers across Hulu, ESPN+, and Disney+ reaching between 300 million to 350 million by fiscal 2024.

As subscriber totals add up, profits will follow and price increases will play a role. So far, the company has priced Disney+ below Netflix to account for the relative lack of new originals available. But given the already vast selection of content from its catalog, not to mention the content scheduled to release, Disney's streaming service appears to be under-monetized.

Disney is already planning to increase the subscription fee by one dollar to $7.99 in the U.S. in March, which will come the same month that Disney launches the animated film Raya and the Last Dragon as a premier access title on its streaming service. This follows a successful launch of Mulan as a premier access title last year, which was originally scheduled for a theatrical release. It's evident that Disney+ is already playing a valuable part in the company's distribution chain and will become more so in the future.

Disney's future is not fully appreciated

Disney's stock price jumped toward the end of 2020, after management updated its plans for streaming in December. But the stock still has more upside. 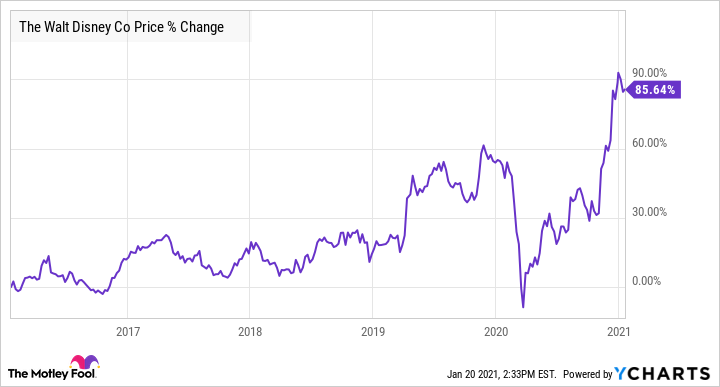 Let's consider Netflix, which now has 203 million subscribers. Netflix reported $1.9 billion in free cash flow for 2020, up from a negative $3.3 billion in 2019, and management believes it is close to becoming sustainably free cash flow positive.

Investors have awarded Netflix a market capitalization (total shares outstanding times the share price) of $253 billion. Meanwhile, Disney's total market cap is currently $319 billion, which is double what it was before the company unveiled Disney+ in April 2019.

Clearly, some of the future growth of Disney's streaming services has already been discounted into the company's valuation, but Citigroup (C -0.06%) analyst Jason Bazinet recently reiterated a buy rating on Disney stock with a $205 target price, which is 16% above Disney's current share price of $176. Bazinet believes Disney's focus on quality over quantity, and bundled plans that combine all three of Disney's services at a competitive price, will continue to drive faster subscriber growth than Netflix over the next few years.

Disney has the advantage of mining its character-rich franchises for years for new ideas. A franchise like Star Wars provides a long runway of new movies and original series to keep subscriber churn low and attract new members. That's why Disney remains a top streaming stock to consider adding to your portfolio.