Please ensure Javascript is enabled for purposes of website accessibility
Log In Help Join The Motley Fool
Free Article Join Over 1 Million Premium Members And Get More In-Depth Stock Guidance and Research
By Chris Neiger, Danny Vena, and Brian Withers - Jan 23, 2021 at 7:00AM

These companies are on a roll.

It's no secret that the stock market was on a tear last year and investors are hoping that the momentum will continue through 2021.

There's no telling what will happen with the market this year, of course. But you can increase your chance of beating the market's returns by finding great companies that are outpacing their rivals. That's why investors should consider investing in Roku (ROKU 2.85%), DocuSign (DOCU 4.64%), and Square (SQ 5.54%) right now. Here's why they could be big winners for investors this year. 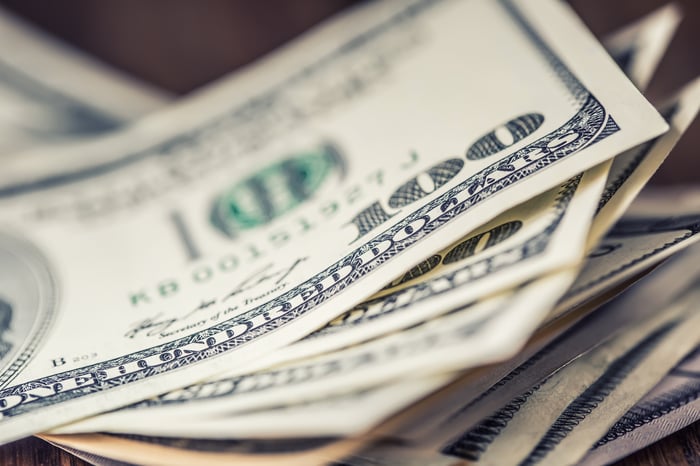 Danny Vena (Roku): It wasn't terribly long ago that when you said Roku, people immediately thought of the company's namesake streaming dongles and dismissed it as an investment idea outright. However, a lot has changed in a very short time.

The streaming devices, which Roku sells roughly at cost, are merely a means to an end. The company makes the majority of its money from the digital advertising that permeates its platform. Roku negotiates a portion of the ad space for every ad-supported streaming provider that lists its service on Roku's platform. You might be surprised to find it hosts more than 10,000 channels, leading to a lot of ad revenue.

That's not all. There is also a large and growing number of subscription streaming services that can be found on Roku's roster. The company gets a cut of any new subscribers that book via Roku's service. The company also negotiates for the right to show premium content from some providers on The Roku Channel, the company's own streaming video channel. Roku gets all the ad revenue from this channel.

In terms of users, Roku is now the undisputed leader in the streaming platform space. While Amazon's (NASDAQ: AMZN) Fire TV ended 2020 with 50 million users, Roku sped into the lead with 51.2 million. Even more importantly, Roku's growth is accelerating, up 38% year over year, even as Amazon's is slipping, up just 25%.

Roku's highly engaged viewer base is voracious in their streaming consumption, watching 58.7 billion hours in 2020, which works out to more than three hours per day.

This large and growing pool of active accounts is becoming increasingly important to advertisers looking to offset the traditional broadcast and cable viewers lost to cord-cutting. The cable TV industry shed nearly 5 million viewers in 2019 and that likely worsened in 2020. It also marked the worst single-year decline in pay-TV history.

Roku also has a super power. The company created a connected TV operating system (OS) from scratch that is so popular with television manufacturers, it could become the industry standard. The Roku OS is already the No. 1 selling connected-TV OS in both the U.S. and Canada, with these Roku-branded TVs accounting for 38% and 31% of the market, respectively.

The combination of ad revenue, the Roku Channel, and OS licensing -- which makes up Roku's platform segment -- grew 78% year over year in the most recent quarter, while total revenue grew 73%.

Roku's stock soared 148% in 2020. But given the migration of viewers away from broadcast and cable TV, the growing adoption of streaming video, and its leadership in the connected TV market, it isn't a stretch to think that Roku will double again over the coming year.

DocuSign: New customers are a key to new growth

Brian Withers (DocuSign): The coronavirus has caused many companies to accelerate their plans to adopt new digital technology. One beneficiary of this acceleration has been DocuSign and its e-signature platform. Over the last three quarters, the company has added 38,000 enterprise and commercial customers, increasing its base of large customers by a whopping 50%. What's exciting for investors is that these new customers are just beginning their digital transformation journey with DocuSign.

When new customers get on board with this e-signature specialist, they are usually focused on a small set of pain points in the organization where eliminating pen and paper signatures will bring the most benefit. But once employees realize the time-saving benefits of e-signature, adoption spreads. Over time, more users will generate more digital signatures in more areas of the business. This expansion is represented by the second icon in the image below labeled "drive adoption." Customers naturally expand their e-signature usage across the organization, which accounts for most of the 122% dollar-based retention from its most recent quarter. 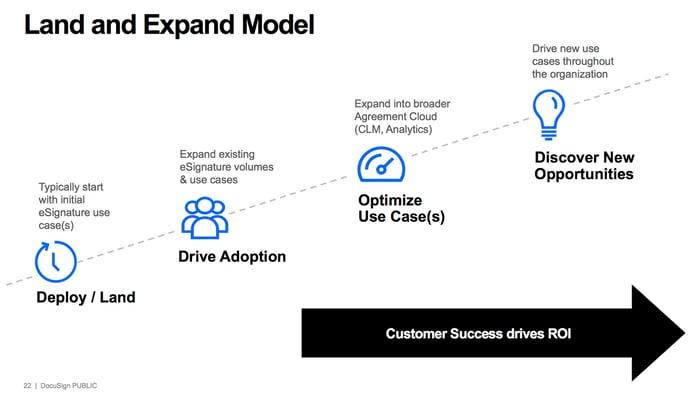 Businesses that have been with DocuSign longer are often looking at how to manage all of these new digital agreements. Without a central system to create, act on, and manage the proliferation of contracts, the process for controlling all of these documents can be very inefficient. At that point, customers may be ready to upgrade to the Agreement Cloud, which enables end-to-end digital management of their agreement process. This suite of capabilities even includes artificial-intelligence-driven search and robust analytics capabilities.

Similar to the e-signature adoption cycle, once businesses sign on to Agreement Cloud, there's even more opportunity to expand the use cases and user base of this extensive suite of products. These two expansion phases are represented by the third and fourth icons in the image above labeled "optimize use case(s) and "Discover new opportunities."

With the tailwinds of new customers signing on, could DocuSign's stock double in the next year? It's possible. Year-over-year revenue growth in the most recent quarter was an impressive 53% and billings (the value of all remaining time on open contracts) grew 63%. The company projected growth for the quarter ending Jan. 31, 2021, to be at least 47%. But with management's track record of beating its own guidance, I wouldn't be surprised to see another 50%-plus revenue growth quarter. More customers than ever are discovering more ways to use DocuSign's suite of products. Even if the stock doesn't double in 2021, investors should start 2022 happy knowing that they own shares in this quality operator.

Square: This company can't be boxed in

Chris Neiger (Square): Square may be best known for its bright white payment terminals found at the hippest coffee shops (the non-cool coffee shops use them too) and many other small businesses.

The company more than proved its payment platform's staying power last year as many businesses shut down due to the pandemic. Instead of reeling form the shutdowns, the company saw a 24% increase in card-not-present gross payment volume (payments made through the company's online channels) in the third quarter, and gross profit soared 59% compared to the year-ago quarter.

Square is also benefiting from a long-term trend toward cashless, digital payments. The company's Cash App, which allows users to pay each other and merchants, now has 30 million monthly active users and delivered a 212% increase in gross profit compared to the year-ago quarter.

The good news for potential Square investors is that the company is only just beginning to tap into the vast digital payments market that will be worth an estimated $2 trillion by 2025.

For investors looking for a fantastic company that has the potential to double their money as it grows into its digital payment market opportunity, Square looks like a good bet.