Please ensure Javascript is enabled for purposes of website accessibility
Log In Help Join The Motley Fool
Free Article Join Over 1 Million Premium Members And Get More In-Depth Stock Guidance and Research
By Zhiyuan Sun - Jan 23, 2021 at 6:45AM

The sky is truly the limit for these top-tier growth stocks.

At the beginning of a bull market, the winners often keep winning, and the losers keep on losing. For investors with a buy high and sell even higher mentality, now is the perfect time to take a look at these companies. 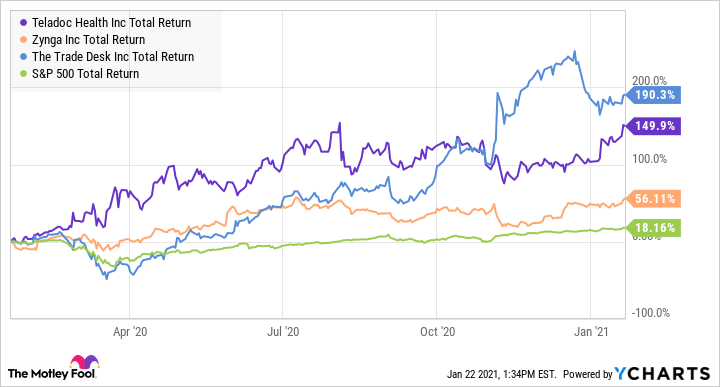 Teladoc has become an early leader in the virtual-care space, a market that could be worth as much as $250 billion annually in the U.S. alone. The company seeks to turn its premium telemedicine platform into an all-in-one stop for those seeking digital consultations with their physicians. Besides traditional online health services, it also provides care for those seeking to manage anxiety, obesity, hypertension, diabetes, and neck or back pain.

Though it hasn't delivered its final numbers yet for 2020, Teladoc expects to report that it facilitated more than 10.6 million virtual visits and surpassed 50 million total members last year. Back in 2019, the company only had 36.7 million members and handled 4.1 million total visits.

In addition, it also projects that its 2020 revenues reached $1.1 billion. That is a substantial increase over the $553 million it brought in 2019. As of now, more than 40% of Fortune 500 companies are offering Teladoc's health services to their employees.

I expect the company to generate record levels of growth year after year due in part to a number of new catalysts. For starters, Teladoc should generate hundreds of millions of dollars worth of revenue synergies over the next few years from its recent acquisition of Livongo Health.

The Trade Desk is a massive data warehouse for ad buyers. Its self-service digital platform features over 500 billion advertising opportunities on any given day across computer desktops, mobile, social media, TV, audio, and search engines. In the U.S. alone, the company's promoted content has a reach of 80 million households and 120 million connected-TV devices.

A key reason why investors should consider The Trade Desk is its fantastic track record of growth since the platform first launched in 2011. Back in 2012, the company celebrated its first month with $1 million spent on its platform. By 2019, total expenditures on the platform surpassed $1 billion per quarter.

The high rate of growth and the quality of its content makes The Trade Desk an ideal stock for those looking to capitalize on the $725 billion global advertising market. Plus -- The Trade Desk has been profitable since 2013.

Perhaps the most notable factors that will drive its business from now on are its international expansion efforts. On a third-quarter earnings conference call with investors, management noted that it had seen "very healthy year-on-year growth" outside the U.S. In fact, gross spending on the company's platform doubled from last year in key markets such as Paris and Tokyo.

This year, The Trade Desk will deliver a major upgrade to its platform with a new user interface and streamlined data management. Its last such upgrade came in 2018, and its market share increased significantly after that. The Trade Desk is, without doubt, a cutting-edge tech stock that is poised to shoot even higher in 2021. 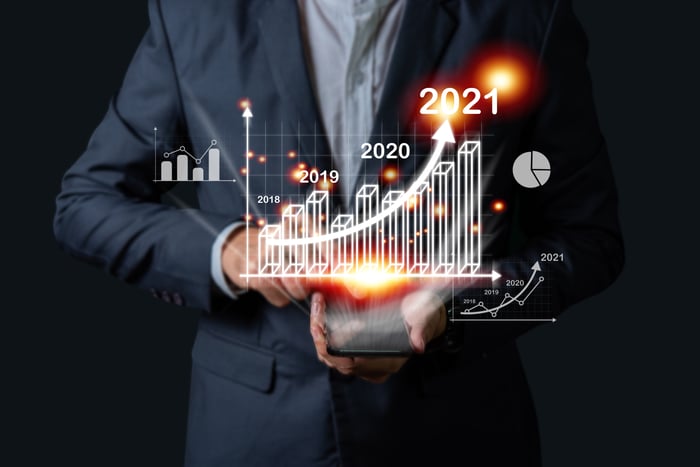 With popular titles such as Zynga Poker, Toy Blast, Farmville, and mini-games based on the Harry Potter series, Zynga is one of the hottest mobile video game developers on the market. Its most recently reported quarter was the best in its history. Revenue and operating cash flow improved in Q3 by 46% and 65% to $503 million and $113 million, respectively.

Besides that, Zynga saw its monthly active users metric rise 25% year over year to 83 million -- a level not seen since six years ago, back when Farmville was wildly popular. It has also been able to turn a profit for four of the past five fiscal quarters. The game developer's free cash flow has fluctuated between a loss of $44 million to a gain of $142 million over that period.

At the moment, Zynga stock is trading for 5.8 times revenue. That is a significantly cheaper valuation than the market is giving key competitors Take-Two Interactive (TTWO -3.04%) (7.1 times sales) and Activision Blizzard (ATVI)(9.6 times sales). Given the ever-rising popularity of online gaming amid the coronavirus pandemic, I'd give investing in Zynga stock a green light. The company also expects to report that in 2020, revenue hit an all-time high of $1.93 billion, a massive increase over its $1.32 billion in sales in 2019.