Please ensure Javascript is enabled for purposes of website accessibility
Log In Help Join The Motley Fool
Free Article Join Over 1 Million Premium Members And Get More In-Depth Stock Guidance and Research
By Reuben Gregg Brewer - Jan 24, 2021 at 6:00AM

Federal Realty Investment Trust's earnings are going to be weak when it reports fourth-quarter results, but the long-term opportunity is still bright.

Shopping center landlord Federal Realty Investment Trust (FRT) has been struggling, and it's going to get worse before it gets better. Here's a look at where this real estate investment trust (REIT) stands today, and why it's worth a little pain to get in on the still-strong long-term story here.

Federal Realty owns roughly 100 shopping centers and mixed-use developments, most of which count grocery stores as prime tenants. Although having a grocery anchor is good, since it brings in customers on a regular basis, that wasn't enough to protect the REIT from the negative impacts of the coronavirus pandemic. 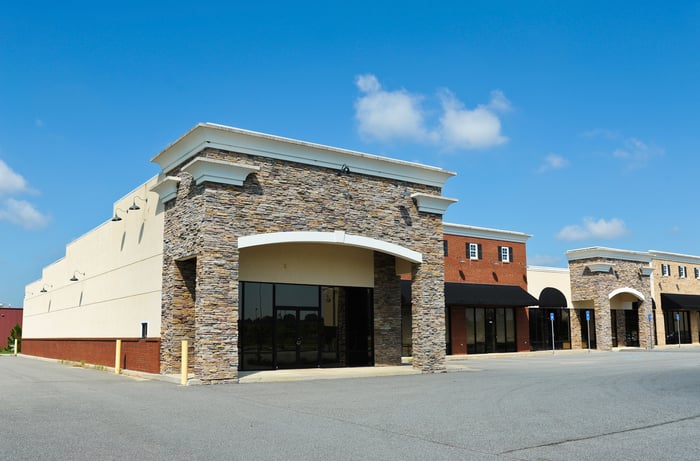 Last April, for example, the retail landlord only collected around 50% of the rent it was owed. By July, that number was up to roughly 75%. And in October, Federal Realty was able to collect 85% of its rents. While that's an improvement, it's still well short of the 100% or so that would mark a return to normal.

And there's another number that has taken a back seat of late, but which is going to become increasingly important for retail landlords: occupancy. In Federal Realty's third-quarter 2020 earnings conference call, management noted that about 92% of its space had tenants. But it added that the figure would likely fall into the mid-to-high-80% range in early 2021. At that kind of occupancy rate, even 100% rent collection wouldn't spare the REIT from material pressure on the top line. In other words, things are likely to get worse before they get better.

This isn't a pleasant backdrop at all, but it should be temporary. In fact, Federal Realty expects occupancy levels to improve materially in the back half of 2021. That's good news, even if it's at least six months away. Part of that optimism is driven by the demand it is seeing from retailers that want to be located in its properties, some of which are looking to relocate from nearby properties run by other landlords.

It makes sense that this would happen, given that Federal Realty focuses on quality over quantity. It has purposefully focused on a relatively small number of well-positioned locations near wealthy, densely populated areas. To put some numbers on that, the average population within three miles of its centers is around 170,000, and the average income is a hefty $127,000. On top of that, management works to ensure its assets remain prime destinations for consumers and tenants, an effort that includes internal investment and careful curation of its tenant list.

Far from a flash in the pan, Federal Realty has honed its approach over decades. In fact, it has an incredible 53-year streak of annual dividend increases under its belt. That is more than twice the number needed to be called a Dividend Aristocrat, and proves that the REIT's long-term approach to owning and operating retail properties works. 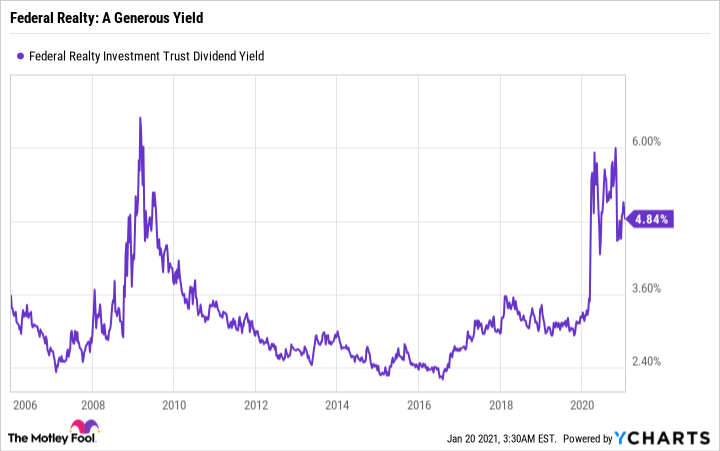 The one big caveat today might be the swift growth in online sales. While online sales have been increasing at a rapid clip, thanks partly to the pandemic, they still make up less than 20% of total retail sales. So online retail is a real issue, but it has yet to kill physical stores. What's more likely is that the weakest retail properties shut down while the strongest survive and thrive, since there will be fewer places to shop overall. That plays right into Federal Realty's hands, given its impressive property list.

So Federal Realty is struggling today, and the near term won't show much improvement. However, that is likely to change as the REIT muddles through the downturn using the same playbook that's worked so well for a very long time.

The problem is that investors are starting to catch on to the long-term appeal here. The stock price is still down nearly 40% from its 2019 highs, but up 31% from its pandemic lows. There is an opportunity here, but it may not last long. Meanwhile, you can collect the REIT's 4.9% dividend yield (which is the highest it has been since the 2007-2009 recession) while you wait out the near-term challenges. For conservative dividend investors, Federal Realty looks like it is offering a good risk/reward balance -- for now.