Please ensure Javascript is enabled for purposes of website accessibility
Log In Help Join The Motley Fool
Free Article Join Over 1 Million Premium Members And Get More In-Depth Stock Guidance and Research
By Trevor Jennewine - Jan 24, 2021 at 11:00AM

These tech titans are two of the most valuable companies in the world.

Amazon (AMZN -7.16%) and Alphabet's (GOOG -3.69%) (GOOGL -3.93%) Google are two of the largest and most successful companies in the world. Google has become synonymous with search, and Amazon's marketplace is the epitome of consumer convenience. And both of these titans have outperformed the S&P 500 over the last one, three, five, and 10 years -- though Amazon's stock soared 815% over the last decade, far outpacing Alphabet's 235% gain. Which stock is the better investment today?

Alphabet's primary source of revenue comes from its Google business, specifically the digital advertising segment. This is driven by Google's utter dominance among search engines -- Google's market share has consistently been near 90% over the last decade. This has allowed the company to collect a tremendous amount of data, making its ad buying and selling tools immensely popular among marketers. As a result, Google consistently captures more than 30% of global digital ad spend. 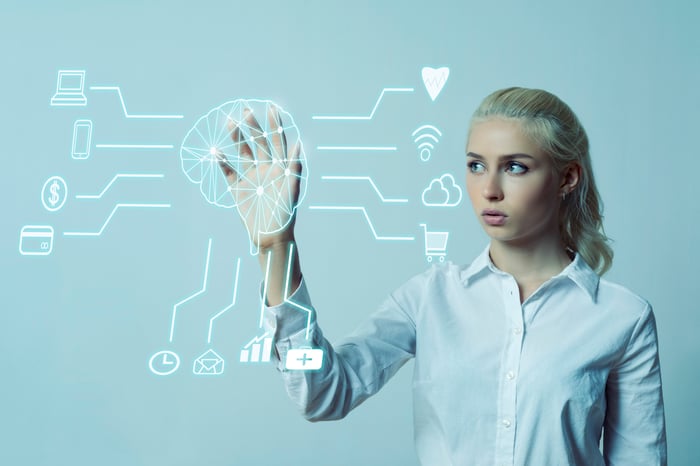 By comparison, Amazon generates the majority of its revenue through its e-commerce business. The company commands roughly 39% of the e-commerce market in the U.S., while Walmart is the next-closest competitor with a mere 5% market share. While this business comes with much lower margins than Google's ad business, Amazon's highly profitable cloud computing business helps pick up the slack, giving the company a tremendous advantage over other online retailers.

Additionally, Amazon is aggressively moving into digital advertising, and the company appears to be taking market share away from Google. Investors should note that Amazon has many of the same advantages as leaders like Google and Facebook, including troves of consumer data, tools to help marketers buy ads and publishers monetize ad space, and various content platforms like Fire TV and Amazon.com where it can sell its own ad inventory. As a result, Amazon's share of digital ad spend in the U.S. jumped 2% in 2020, while Google's fell 2%.

Google is still the leader by a long shot, but Amazon has a history of disrupting the status quo. The company's online marketplace and streaming platforms (Fire TV and Twitch) are popular content hubs, and could be powerful growth drivers for Amazon's ad business in the coming years.

According to research firm Gardner, both Amazon Web Services (AWS) and Google Cloud Platform (GCP) are market-leading providers of cloud infrastructure and platform services. But while both companies offer storage, computing, databases, analytics, and other tools, Amazon launched its cloud computing service two years ahead of Google, and it has never given up that lead. Today, AWS still has a more comprehensive offering and has achieved wider adoption. In fact, AWS is the world's leading cloud services provider, taking 32% market share in the third quarter of 2020 compared to Google Cloud's 7% market share. As you might expect, this means AWS generates much more revenue, though Google Cloud is growing faster.

Amazon could easily make a strong move into gaming and esports. Amazon Games is the company's in-house game development studio, and with AWS for content delivery and Twitch as a way to engage gamers and monetize esports, it's not hard to imagine Amazon as a serious competitor in this space.

What's more, if Amazon does aggressively pursue this multi-billion dollar market, the company would likely be more profitable than other gaming companies -- that's because Amazon already owns the infrastructure and tools needed to build  games and host content, whereas 90% of the world's largest public game companies actually rely on AWS for these services.

In other words, this could be a very high margin business for Amazon. To keep track of the company's foray into gaming, investors should pay attention to Amazon Games' upcoming release of New World in May 2021.

Alphabet, on the other hand, has its "other bets" business, which includes Waymo, the company's self-driving car company. According to Swiss investment bank UBS, the autonomous vehicle market could be worth $2.8 trillion by 2030, and Waymo is well positioned to take a good chunk. The company's autonomous vehicles have already logged over 20 million real world miles, far outpacing the competition, and Waymo recently started offering ride hailing services to the general public in Phoenix. If this moonshot pays off, it could create another enormous revenue stream for Alphabet, perhaps even surpassing that of its Google business.

Investors should pay attention to both companies' ability to sustain revenue growth over the long run. Together, these titans are worth over $3 trillion, and growth tends to slow as businesses mature.

However, Alphabet and Amazon are both innovative, well-managed companies with deep pockets and bright futures -- I don't think investors can go wrong with either one. That being said, I think Amazon has an edge here. The company has two different market-leading businesses, which is an incredible accomplishment. Moreover, Amazon has a larger addressable market , and the company is growing faster than Alphabet as a whole.