The market didn't appear to like new CEO Pat Gelsinger's "stay the course" strategy, but it's the right move long-term.

A rejuvenated Intel (INTC -4.62%) had an interesting two days on Thursday and Friday of last week. The company released better-than expected Q4 2020 results Thursday morning, which initially sent shares skyrocketing about 7%. This was after the stock had already increased some 15% month-to-date following activist investor involvement and the appointment of new CEO Pat Gelsinger. 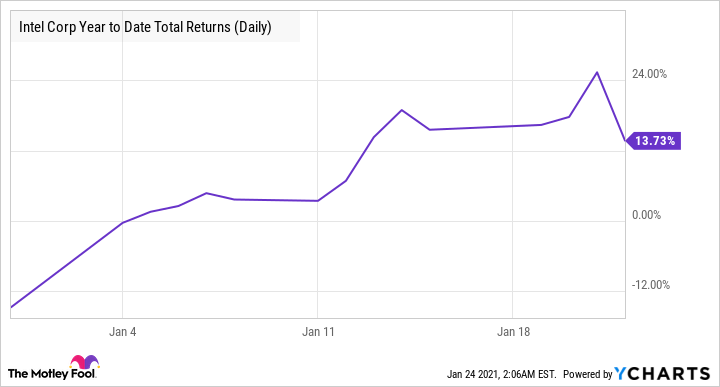 However, after the conference call held Thursday evening, Intel's stock plunged over 9% the next day. Apparently, investors were disappointed that Gelsinger and current management didn't announce any drastic changes to Intel's manufacturing plans. Given the recent rise in the stock, it's perhaps no surprise that the anticlimactic conference call spurred a sell-off.

However, the fact of the matter is that Gelsinger's initial strategy, while disappointing to some hoping for more drastic action, is exactly what Intel needs to be successful over the long-term. 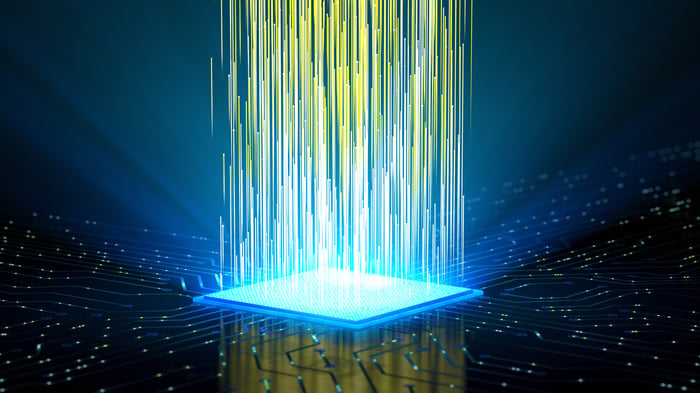 Why Gelsinger's comments may have disappointed some

Investors chasing Intel might have hoped its new CEO would announce more outsourcing of its manufacturing to Taiwan Semiconductor Manufacturing (TSM -2.99%). Such a move would probably improve Intel's competitiveness in the short-term, as Taiwan Semiconductor has already successfully begun producing 5nm chips. Meanwhile, Intel's struggles have put it well behind TSMC, and Intel now expects its 7nm chips (equivalent to TSMC's 5nm), out by the first half of 2023. Therefore, short-term investors were hoping Intel might quit trying to run its own fabs and become just a designer of chips, with outside foundries such as TSMC taking up the difficult manufacturing burden.

However, that move doesn't appear to be in the cards. Gelsinger reiterated that while Intel may move some products to outside foundries (such as its new GPUs), the "majority of 2023 products" – likely referring to 7nm processors -- would still be done in-house.

Thus came the quick sell-off from investors who were hoping for a change in strategy. Instead, Gelsinger is taking the harder route; one that will take several years to pay off... if it pays off at all.

Still, the harder route is the right move long-term, even if it will be harder to pull off. Here's why.

Outsourcing now would deprive Intel of its traditional competitive advantages

While outsourcing to TSM would be a quick fix to Intel's problems, it would also take away the prospect of ever regaining technology leadership that made Intel the dominant force in the semiconductor industry to begin with. Should Intel move to outside foundries, it could only match the node transitions of its competitors, not exceed them.

While Intel's manufacturing struggles have caused it to lose market share to the ascendant Advanced Micro Devices (AMD -6.04%), Intel still has the largest market share today, especially in data centers, since it was starting from a dominant 90%-plus position. However, its share has come down significantly in desktop CPUs.

If Intel were to outsource, it might stem the decline in the short-term, but over the long-run, it would probably only enable Intel to maintain an even market share with AMD and other potential competitors.

Intel has fallen behind in the past, and has corrected itself

One of the more encouraging comments on the conference call was when Gelsinger highlighted another time when Intel had fallen behind competitors, when processors moved to multi-core technology in the mid-2000s, only to catch up and eventually surpass them:

I was very involved in the period where we were very right diminished in the marketplace and late to multi-core. And in that period of time in 2005 through 2009, we turned around the company and unquestionably established the leadership position after a period where many were questioning the ability of the company to be successful, yet again, great companies are able to come back from periods of difficulty in the challenge and they come back stronger, better, and more capable than ever. And that I believe is the opportunity at Intel and I'm confident that this company has its best days in front of it...

Of course, turning out leading-edge node semiconductors appears to be quite a challenge, as Intel has struggled and lost ground not only during the 7nm transition but also the previous 10nm transition before that. Still, Gelsinger seems confident that he can affect a turnaround under his watch.

Intel is an important national asset

Another point is that Intel the only large U.S. processor company that runs its own fabs, with other chip designers outsourcing to Taiwan or Korea's Samsung (OTC: SSNLF). Yet with the trade war and other supply chain troubles this year, there is now a renewed push to reinvest in U.S. semiconductor manufacturing. Although TSM is building one of its new plants in the U.S., and Samsung may build another fab on U.S. soil as well, it probably wouldn't be a great idea to have all U.S.-made chips dependent on foreign companies.

By keeping its fabrication plants, Intel would not only maintain U.S. capacity, but it could also qualify for potential new incentives under the Biden Administration. There is currently a $50 billion proposal in Washington to invest in domestic semiconductor manufacturing, so if Intel wants to get any of these federal grants or tax breaks, it likely can't outsource its plants to foreign companies.

Gelsigner is bringing in new blood

Finally, if Intel is to retake the manufacturing throne in the future, it's going to need to attract the very best engineering minds to do it. That's why the selection of Gelsinger was so important in the first place. Gelsinger had previously spent 30 years at Intel and is a technologist at heart, having trained under Intel legends Andy Grove, Gordon Moore, and Robert Noyce.

After former CEO Brian Krzanich resigned following an affair with an Intel employee in mid-2018, former CFO Bob Swan took over as CEO. While it's probably not fair to blame Swan for Intel's manufacturing problems as they likely started before he became CEO, Intel probably needed a leader with deep roots in technology, rather than finance, to lead the company out of the morass.

On the conference call, Gelsigner reiterated that returning to Intel as CEO was his "dream job," and that he was really excited to bring in his own hand-selected team. Gelsinger said, "You might have seen we just announced a new fellow coming back, one of my absolute favorites when I was here. Glenn Hinton coming back to the company, and you'll be seeing other announcements of key leaders coming back in."

If Intel investors want the company become a technology leader ever again, and not just an undifferentiated competitor, Gelsinger's strategy is absolutely the right approach. Encouragingly, Gelsigner also said that based on his preliminary look at Intel's new 7nm design -- which is about six months old following the initial misstep -- he's confident it's on the right track.

Only time will tell, however. An investment in Intel is ultimately a bet on Gelsinger and current management's ability to fix a difficult manufacturing problem. If successful, Intel could have tremendous upside, given its modest valuation. But the stock still comes with that big execution risk, so Intel will likely be a ongoing battleground stock over the next couple years.