Please ensure Javascript is enabled for purposes of website accessibility
Log In Help Join The Motley Fool
Free Article Join Over 1 Million Premium Members And Get More In-Depth Stock Guidance and Research
By Billy Duberstein - Jan 25, 2021 at 7:23AM

Up over 60% in the past six months, this leading semi stock is still undervalued.

Clearly, megatrends of 5G, artificial intelligence, cloud computing, the Internet of Things, and the general move to the digital economy have been a boon to companies that produce the leading-edge chips that power these applications. This is in spite of two massive market downturns over the past three years. 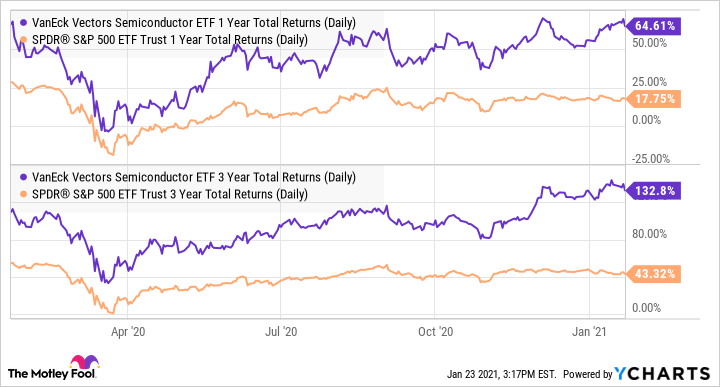 However, after the sector's massive run, are there any good values left? Many semi stocks are trading at frothy valuations as investors now see the long-term megatrends for what they are.

Still, the sector is large enough that there are usually always unique stories and opportunities. That's why the following stock is still one of my favorites heading into 2021, despite a big recent run-up. 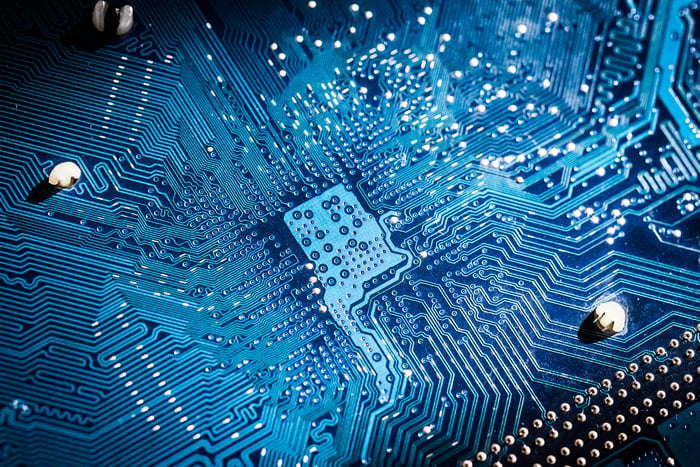 This memory market leader is leaping ahead

Micron Technology (MU 3.95%) may not seem like the ideal semiconductor stock to many investors. After all, the company makes somewhat commodity-like DRAM memory and NAND flash storage, a far cry from the proprietary CPUs of Advanced Micro Devices (AMD 5.64%) or the unique GPUs of an Nvidia (NVDA 5.55%). Also unlike these two companies and many other hot semi names, Micron owns its own fabrication plants, which gives the company high fixed costs.

However, being in an unattractive, difficult corner of the market can also have its advantages. After all, if you have a difficult business, the less likely it is that other companies will follow and compete with you. That's why the DRAM memory and NAND storage industries have consolidated to just three a five major players, respectively, over the past decade. With so few competitors, the remaining DRAM and NAND oligopoly should be able to more accurately align supply with demand going forward, without flooding the market and crashing prices.

Coming out of a downcycle, with a history of making higher highs and lows

Of course, memory and storage players did oversupply the market in 2018, so investors are likely still skeptical. After two boom years between late 2016 and mid-2018, memory players seemed to realize the massive potential of the aforementioned tech megatrends, and invested heavily in supply growth. However, that supply surge occurred just as the Trump administration was launching its trade war with China, which snuffed out demand almost instantly, leading to a huge crash in prices.

Memory cycles last about two years, as there is a lag between investment and supply increases. Yet just as we were coming out of the trade war-induced down-cycle, COVID-19 hit, which delayed the coming upcycle.

However, after two years of decreased investment in supply growth, the memory industry appears to be in for another demand boom akin to the 2017-2018 period. Leading semiconductor fab Taiwan Semiconductor Manufacturing (TSM 2.14%) just announced a massive increase in capital expenditures for this year, suggesting the world's biggest semiconductor manufacturer sees huge demand for leading-edge chips. And all of those leading chips require memory and storage to run.

A big year for 5G and other memory-intensive applications may therefore be arriving just as the memory industry's decreased supply investments flow through, leading to an undersupply and an increase in memory prices in 2021. 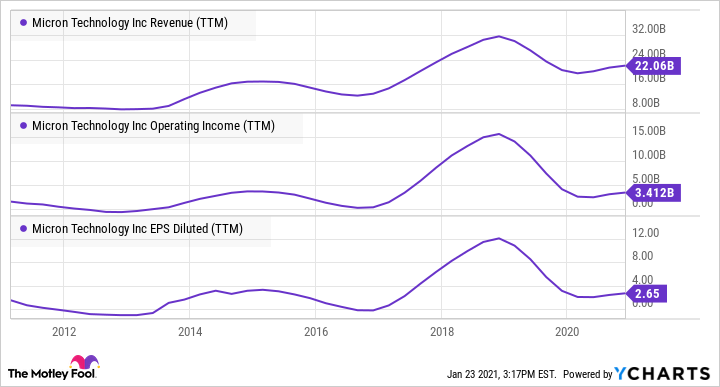 Additionally, though Micron's end-markets are no doubt cyclical, the memory industry tends to make higher highs and higher lows with each cycle, as you can see in the chart above. Given that annual earnings topped out at $11.51 per share in 2018, Micron could exceed that figure at the next peak. Although Micron's stock has run up in recent months, its current price around $82 is less than eight times that figure, making the stock still very cheap indeed.

Aside from being at a good point in the cycle, there's reason to think that Micron could even outperform the prior cyclical high. That's because it has gone from a technology laggard to a technology leader in four short years under CEO Sanjay Mehrotra's tenure.

Since they make near-commodities, memory and storage companies compete by racing to become more efficient. With each generation of memory modules, memory companies pack more and more bits onto a single wafer. That lowers the cost per bit and increases overall bits produced.

For years, Micron had been behind its large Korean competitors Samsung and SK Hynix in terms of node transitions. However, it appears that Micron has now assumed technology leadership in both DRAM and NAND in the fourth quarter. Micron was the first to scale its 1z DRAM node last year, and in Q4, was the first NAND company to achieve 176-layer 3D NAND.

On the recent conference call with analysts, Mehrotra said:

[O]ver the last few years, we have accelerated our technology road map in both DRAM and NAND. As a result, for the first time in our history, Micron has technology leadership in both DRAM and NAND simultaneously. Now that we are leading the industry in technology capability, going forward, we expect to maintain this competitive position through a more typical cadence for node transitions consistent with the rest of the industry.

In other words, Micron was likely overspending the last four years as it sought to catch rivals in terms of its technology and cost structure. That means it was probably spending more on capex than was necessary. Going forward, this could mean that Micron will be much more profitable and generate more substantial cash flow than it has in the past.

Given Micron's cheap valuation and the coming cyclical upswing, it was already an attractive stock heading into 2021. However, the unique cost structure and technology improvements may not be fully comprehended by the market yet. If Micron can indeed post higher and more sustainable profits in the years ahead, the stock could rerate even higher than it has already.

That additional business improvement is why it's my favorite semi stock for this year and beyond.