Please ensure Javascript is enabled for purposes of website accessibility
Log In Help Join The Motley Fool
Free Article Join Over 1 Million Premium Members And Get More In-Depth Stock Guidance and Research
By Rich Duprey - Jan 26, 2021 at 10:00AM

Interest in outdoor activities may be a long-term trend and not a fad born of COVID-19.

Although the decision to spin off American Outdoor Brands (AOUT 7.06%) from former parent Smith & Wesson Brands (SWBI 1.48%) was made before the COVID-19 pandemic, the outdoor gear and accessories maker was able to capitalize on the opportunity of more people looking for outside activities.

Over the course of its first two fiscal quarters, sales are 60% higher than they were a year ago, and it's posting operating and net profits instead of losses. American Outdoor also raised its full-year guidance.

The outdoor gear company has a nice tailwind behind it, but prior to the coronavirus outbreak it was struggling to gain traction. Investors need to ask: If widespread distribution of vaccines allows for a return to a semblance of normalcy in our daily lives, does that mean American Outdoor Brands will also revert to its prior slow-growth state? 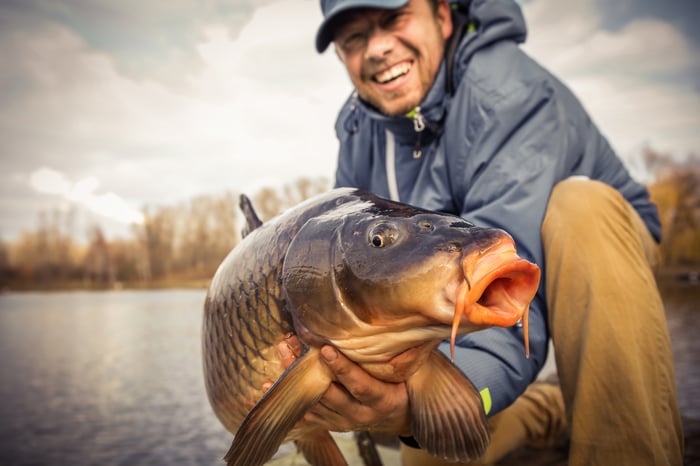 It was arguably a mistake for firearms maker Smith & Wesson to branch out into outdoor equipment. Although part of the rationale was to smooth out the volatility of the gun industry, which tends to go through boom-and-bust cycles, being a small fish in a much bigger pond, as it is in the outdoor recreation industry, brings its own worries.

There are much larger, better-known competitors in the space, and the ties to the gunmaker created potential problems for selling its gear at retail.

Vista Outdoor, for example, was boycotted by major outdoor recreation chains REI and Mountain Equipment, which stopped selling its Camelbak, Bell, and Giro brands of equipment until it acquiesced and sold its firearms division.

The U.S. Supreme Court also allowed the victims of the Sandy Hook school shooting to sue Remington Arms into bankruptcy because of the way it marketed its firearms, despite federal liability protections that have historically given manufacturers legal immunity when criminals use guns to commit crimes. Financial institutions are also growing leery of financing gunmakers, which could make growth plans for American Outdoor difficult to implement.

And finally, with the election of President Biden, it may have been fortuitous to split the company in two, as he campaigned on taking harsher action against gunmakers.

Making its own way in the world

Being independent absolves American Outdoor of all the purported sins of its former parent, shields its assets from any potential lawsuits, and gives it a more focused vision for the future.

The pandemic certainly made more people want to enjoy outdoor activities, including camping, shooting sports, hunting, and fishing, all of which share significant overlap in participants. American Outdoor president and CEO Brian Murphy says the data indicates that "an outdoor renaissance is underway and that its effects may be long-lasting."

It's using the opportunity to expand into some adjacent markets with products such as its Lockdown Puck, a monitoring device for gun safes and vaults. The device alerts the owner when someone is attempting to open or move the safe and also monitors humidity and temperature inside.

American Outdoor is also introducing some lifestyle products, seemingly taking a cue from companies like Yeti, which capitalized on its coolers' reputation for over-the-top durability and introduced items like drink tumblers, mugs, and ball caps, all of which have become some of its fastest-growing products. The outdoor gear company's Bog brand, for example, is a hunting accessories manufacturer expanding into game cameras, while its UST division, known for survival gear, is targeting the camp lifestyle.

American Outdoor looks financially fit. Sales are soaring, and while that's driven by the pandemic, it's possible many of the people who recently took up outdoor activities will continue to engage in them for years to come.

American Outdoor is now reporting profits and has no debt on its balance sheet. Free cash flow is rising rapidly, and while its enterprise value trades at 23 times the cash flow it produces -- not a bargain basement valuation -- that multiple could narrow considerably as it grows.

Shares of the consumer discretionary company are up 23% from the initial pricing at the spinoff, and up 62% from the low it hit in September following its first-quarter earnings report. The second-quarter report seems to have given investors more confidence in its future, and the coronavirus pandemic seems to have turned American Outdoor Brands into a good long-term buy.

Why American Outdoor Brands Fell 21% at the Open Today

Why Shares of American Outdoor Brands Rose on Thursday