Please ensure Javascript is enabled for purposes of website accessibility
Log In Help Join The Motley Fool
Free Article Join Over 1 Million Premium Members And Get More In-Depth Stock Guidance and Research
By Jeremy Bowman - Jan 26, 2021 at 6:05AM

Detroit may be down, but it's not out.

Shares of the leading electric vehicle maker jumped more than 700% as investors saw a tipping point in the electrification of the auto sector, and Tesla also hit its goal of delivering 500,000 vehicles while expanding production worldwide. There were plenty of other winners in the EV boom, including Chinese EV maker NIO and Workhorse Group, a maker of electric trucks. Electric and fuel cell supply chain stocks like Plug Power, Bloom Energy, and Beam Global surged as well.

However, something surprising is happening in 2021: Detroit is making a comeback. After years of underperformance, General Motors (GM -5.96%) and Ford (F -5.54%) are both rallying, and the legacy automakers have outperformed Tesla this year, as the chart below shows. 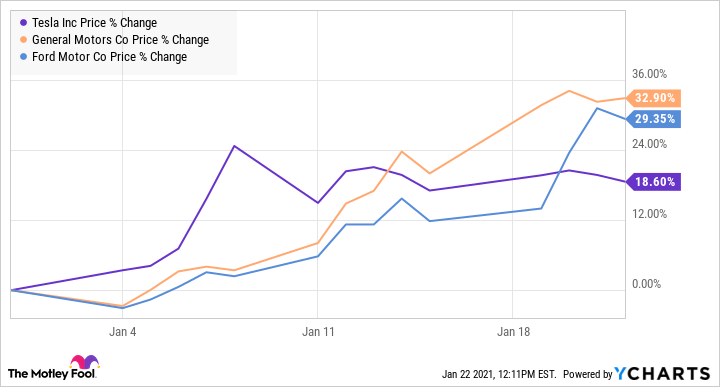 What's happening with these auto stocks? Let's take a look at why the Detroit automakers are suddenly back in vogue.

For years, General Motors seemed to have the components to make the leap into the next generation of auto manufacturing, but didn't get any credit for it. The company's Cruise autonomous vehicle division was valued at $19 billion in 2019 and GM was making electric cars as early as 1996 with the EV1, while the plug-in hybrid Chevy Volt debuted in 2010, soon followed by the all-electric Bolt. 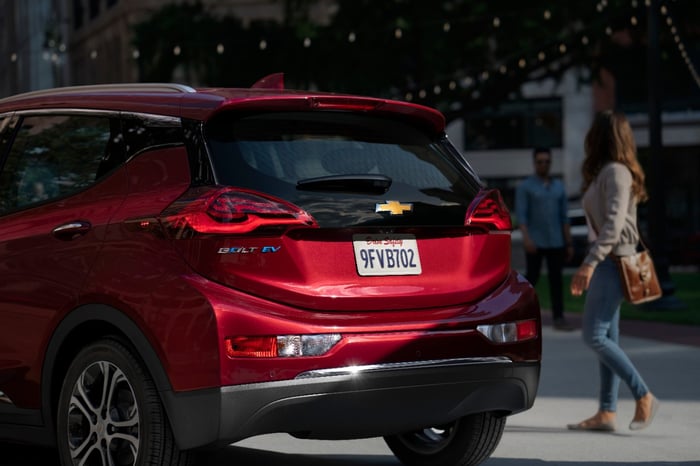 However, as an incumbent, GM seemed to have more to lose than gain from the rise of EVs, and it disbanded the EV1 because it didn't see a path to profitability.

That perception now seems to be changing. Last November, GM said it would have 30 EV models by 2025, and that it would invest $27 billion in EVs and AVs (autonomous vehicles) by 2025, up from a previous commitment of $20 billion. That's more than the company plans to invest in internal combustion vehicles vehicles.

This year, the pace of those announcements has accelerated. On Jan. 8, the company announced a rebranding and a new marketing campaign to underscore its goal of accelerating "mass adoption of electric vehicles." On Jan. 12, the company unveiled a new business called BrightDrop, a suite of electric vehicles, software, and services for delivery and logistics companies, ranging from an electric pallet to an electric truck with 600 cubic feet of cargo space.

Finally, the Chevy-maker said it had entered into a long-term strategic relationship with Microsoft to accelerate the development of its self-driving vehicles. As part of the tie-up, Microsoft participated in a $2 billion funding round that brought Cruise's valuation to $30 billion.

All of these moves show GM fast pivoting away from its perception as a stodgy automaker, and responding to the market premium on EVs and AVs. Wall Street has taken notice as well -- GM has received several upgrades in January, helping to boost the stock price.

Ford gets snatched from the bargain bin

Ford hasn't made as much noise as General Motors in EVs and AVs, but the company's investment and strategic partnership with Rivian in 2019 has proven to be a smart move. Ford invested $500 million in the EV maker in 2019, which was valued between $5 billion and $7 billion at the end of that year. Today, Rivian is worth $27.6 billion after its latest funding round.

As for its own electric vehicles, Ford recently released the Mustang Mach-E, its first high-range EV, and the company is focused on electrifying its current vehicle models, including commercial vehicles, cargo vans, and pickup trucks -- what the company sees as its strengths.

Ford stock has also been cheap enough that Wall Street has started to take notice, and the pandemic-driven surge in demand for cars along with the company's potential in EVs and AVs seems to be lifting the stock. Ford's sales are roughly the same as GM's, but the company's market cap is only a little more than half that of GM.

The automaker said earlier this month that it would shutter production in Brazil, taking a restructuring charge of $4.1 billion, as South America has long been a headache for the company. That's part of an extended restructuring plan that dates back to 2018, and it's a sign that the company still has a work to do to execute effectively. Still, Ford has a number of valuable assets, including the No. 1-selling vehicle in the U.S., the F-150, and in commercial vehicles like cargo vans, which are top candidates for electrification since many are only used within a certain range.

Even with the recent rally, GM and Ford are still valued at less than 10% of Tesla's market cap, effectively making them EV bargains.

The boom in EVs signifies one of two things. Either EV makers will enjoy bumper profits that will justify their current valuations, or the sector is in a bubble, meaning pure-play EV stocks will eventually pop. Both of these outcomes favor GM and Ford.

Legacy automakers, especially GM, will soon be able to compete with Tesla as they have an advantage in areas like manufacturing capacity. While it's difficult for incumbents to pivot to new models, it's not impossible. Disney just accomplished this in video streaming with the enormous success of Disney+.

Investors who have won big on Tesla would be wise to diversify some of those winnings into a stock like GM. Tesla won't be the lone wolf in EVs forever, and valuations and manufacturing infrastructure favor incumbents like GM. With enough willpower, which now seems evident, and effective execution, GM could be the next big winner in the EV boom.