Legacy companies should be paying attention to what just happened to Disney stock.

One makes cars; the other one does entertainment. The two operate in vastly different industries, each with their own set of economics and distinct challenges.

However, both companies found their footing and built their brands in postwar America. More recently, they've faced competition from disruptive upstarts, which has weighed on the stocks, as investors well know.

In Disney's case, investors saw Netflix (NFLX 9.40%) briefly top its market cap last summer. The market for years has favored the leading streamer, even though Disney is much more profitable and has businesses like theme parks that make it more than a video entertainment provider.

For GM, the gap between it and the more disruptive auto companies is even starker. The Chevy maker has had its own market cap eclipsed by Tesla (TSLA 5.01%), the erratic electric-car maker, for much of the past year, and ridesharing leader Uber could nearly double GM's market value, with its upcoming IPO set to fetch a valuation as high as $100 billion. As is the case with Disney and Netflix, GM is far more profitable than those upstart rivals, but the stock trades at a P/E of just 7, far below the market average of 22.

Investors don't need a crystal ball to see what the market is thinking here. GM and Disney are legacy companies being treated as relics, leaders of a bygone era that will be surpassed by challengers like Netflix, Tesla, and Uber that are growing much faster than the older operators, even though they make much less in profits.

Disney shares had struggled with this perception for nearly four years. In August 2015, CEO Bob Iger acknowledged that ESPN, one of the company's biggest cash cows, was losing subscribers as more consumers cut the cord. Since that announcement, Disney shares have basically traded sideways. Investors feared the unraveling of its cable empire, the company's most profitable business segment, as viewers switched from cable to streaming services like Netflix.

However, something remarkable happened in the past week. In the span of just a few hours, Disney changed that narrative, giving the stock an unprecedented jolt, and assuring investors that the company was no dinosaur.

The entertainment giant unveiled its long-awaited streaming service, Disney+, capitalizing on its unrivaled library of content, its recent Fox acquisition, and its global brand equity. Disney shares jumped 11.5% on April 12, the day after its evening presentation, reaching an all-time high, and tacked on another 1.5% on April 15. Netflix stock, meanwhile, was running scared, falling 4.5% the day after the news came out.

The disrupted, it seemed, had become the disruptor.

What was equally enlightening was that Disney+ made it clear that the service would be a drain on profits for the next several years. The company doesn't expect it to get out of the red until 2024. Analyst Michael Nathanson sees Disney+ losing $2.5 billion next year.  However, that mattered little to investors, who applauded the company's embrace of the future. 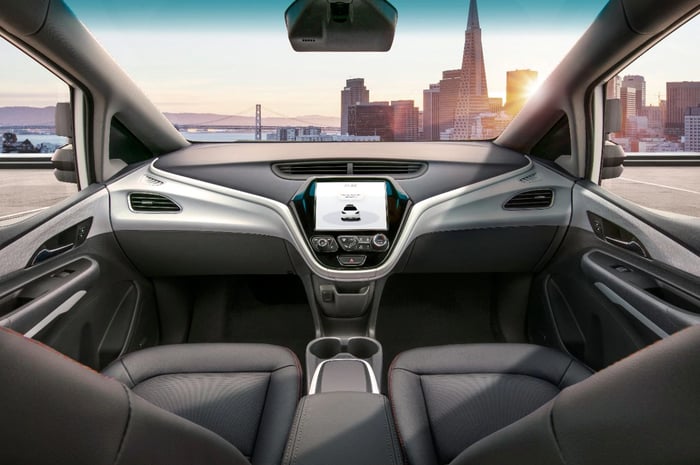 The GM Cruise AV, which has no steering wheel or pedals. Image source: General Motors

Why it matters for GM

The threat facing General Motors isn't quite as clear as Disney's struggle with cord-cutting. Investors fear a number of challenges facing the automaker, including a cyclical market that appears to be past its peak, competition from ridesharing, and the rise of electric and autonomous vehicles, all of which cast doubt on the future of traditional combustion-engine automakers like GM and Ford (F 1.13%). According to conventional wisdom, car sales have plateaued and could soon decline as millennials forgo traditional car ownership in favor of ridesharing and other alternatives.

However, like Disney, GM has its own trick up its sleeve in the form of its Cruise autonomous-vehicle division. Though Waymo may be considered to be the leader in AV tech, and Uber and Lyft dominate ridesharing, GM has several advantages when it comes to Cruise, including the infrastructure to mass-produce such vehicles.

GM CEO Mary Barra has said multiple times that the company was aiming to launch an autonomous-vehicle ridesharing service this year. She has not yet said where GM would roll out such a network, but it is currently testing its AVs in San Francisco.

With the calendar already a few pages into 2019, GM investors are itching for some news about the prospective ridesharing service, and such an announcement has the clear potential to catapult the stock higher. Investors already showed their enthusiasm for Cruise last year when GM stock jumped 13% in a single day after Softbank invested $2.25 billion in GM's Cruise division, valuing it at $11.5 billion.

If GM does it right, the AV ridesharing launch could unleash the undervalued stock by re-creating its image as a forward-thinking tech company much in the way Disney+ has led investors to begin reassessing the entertainment company as a streaming stock rather than a declining cable network.

However, time is ticking. Waymo launched its Waymo One AV ridesharing service last December in Phoenix; Tesla has a big presentation about autonomy planned for later this month; and Uber is shaping up for its blockbuster IPO, which will give the ridesharing giant billions more to play with. Lyft (LYFT 4.28%) has already cashed out in the public markets, raking in $2 billion along the way.

In 2017, Barra laid out a bold vision for GM: A future with zero crashes, zero emissions, and zero congestion.  That's the kind of goal worthy of a high-value tech stock rather than a legacy automaker seen to be on the edge of decline. After years of spinning its wheels, GM stock now has an opportunity to shift into high gear, but first the company must change the market's perception, and the AV ridesharing service is an excellent way to do it.

As the Disney+ episode shows, the underlying narrative often counts for more than any set of hard financial numbers in the market, especially for legacy companies.

Investors know GM can crank out high-margin trucks. They want to see something new.