Please ensure Javascript is enabled for purposes of website accessibility
Log In Help Join The Motley Fool
Free Article Join Over 1 Million Premium Members And Get More In-Depth Stock Guidance and Research
By Jeremy Bowman – Updated Apr 16, 2019 at 9:51AM

The success of tech stocks over the last decade has changed the way big investors think.

Lyft, the country's No. 2 ridesharing company, hasn't even gone public yet, but shares are already flying off the shelves.

After filing its amended S-1 on March 18, specifying a range of $62 to $68 a share, the company began its road show to drum up interest from major investors. The next day, the IPO was oversubscribed, meaning investors were already demanding more than the 30.8 million shares the company planned to sell. Lyft's investor presentations are attracting standing-room-only crowds, making it arguably the most coveted IPO since Facebook (META -2.88%) made its debut in 2012.

As a result of that outsize demand, Lyft is raising its offer price, though the company has yet to settle on a final number. The Wall Street Journal reported that it was likely to be in the low $70s, valuing the company above its initial range of $21 billion to $23 billion. The stock is expected to start trading Friday morning on the Nasdaq market using the ticker symbol LYFT.

Though plenty of investors are wary of the risks of throwing money at a company that lost about $911 million in 2018, more are seeing dollar signs in the pure play on the fast-growing ridesharing industry, which is expected to become a massive market if autonomous vehicles go mainstream.

To understand why the big investment firms are clamoring for a piece of Lyft, a look at past stock offerings may offer the best explanation.

With memories of the dot-com bust long since having faded, tech stocks have reasserted their supremacy in the global economy. In the U.S., the four most valuable companies, Microsoft (MSFT -0.20%), Amazon (AMZN 1.20%), Apple (AAPL 0.23%), and Alphabet (GOOG -0.36%) (GOOGL -0.58%), are all tech stocks. Collectively, they account for more than $3 trillion in market value. Throw in Facebook, and that number tops $4 trillion.

Technology is largely where disruption and opportunity meet these days. Investors know it, and the numbers back it up. As the chart below shows, the tech-heavy Nasdaq has easily outperformed the S&P 500 during the bull market over the last decade. 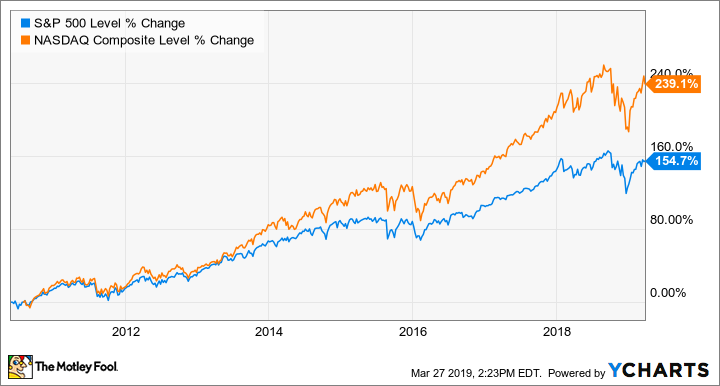 So-called FANG stocks -- an acronym for Facebook, Amazon, Netflix (NFLX -1.03%), and Google (now Alphabet) -- have captured the market's attention for much of that time. The group, which is sometimes expanded to include Apple and Microsoft, has destroyed the market average. The chart below shows their performance since Facebook's IPO in 2012. 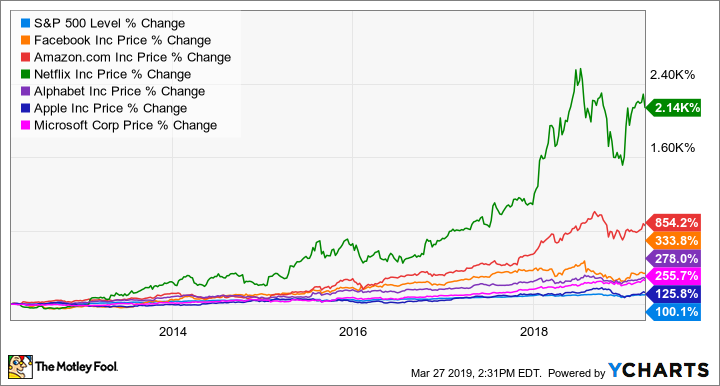 Not only have all six stocks outperformed the S&P 500, their average return during that period is also a staggering 664%. Without Apple and Microsoft, it would average 902%. Those are the kinds of returns that have institutional investors salivating for the next big opportunity. Right now, that looks like Lyft with its strong growth, industry disruptiveness, and huge opportunity.

In both the tech world and the broader market, no two other stocks have put up the kind of returns that Amazon and Netflix have over the last generation. Netflix shares are up 29,400% since their 2002 IPO. Amazon shares, meanwhile, have gained a whopping 89,700% since they debuted in 1997. To put that in perspective, $1,000 invested in Amazon then would be worth nearly $1 million today.

But what's particularly noteworthy about those companies' paths to market dominance is that they did it without showing profits for most of their history. Amazon was reporting an annual loss as recently as 2014. At Netflix, which is valued at more than $150 billion today, net income only topped $1 billion for the first time last year. In 2015, the company had just $123 million in profit.

The huge success of Amazon and Netflix, both as companies and stocks, has trained investors to overlook extended bottom-line losses, especially when factors like growth, disruption, and market opportunity come into play.

Of course, Amazon and Netflix's dominance doesn't mean that Lyft is destined for greatness as well. For starters, the stock is debuting at a much greater valuation, and Lyft is more developed as a company at this point than either Amazon or Netflix were when they had their IPOs.

Lyft is seeing impressive growth, as revenue doubled to $2.2 billion in 2018. It is (along with Uber) disrupting the transportation market, taking share from taxis, rental cars, and even car ownership. The company is chasing an enormous market opportunity in mobility and transportation. Intel has predicted that the global "passenger economy" will be worth $7 trillion by 2050.

While Lyft's potential may be clear, there are some important differences between it and Amazon and Netflix. The two tech giants never experienced annual losses topping $911 million. That total is more than any other IPO ever posted in the 12 months leading up to its debut. Operating around breakeven is one thing, but Lyft could encounter a cash crunch in the coming years if it doesn't find a way to clean up all that red ink.

What's more important, perhaps, is that Amazon and Netflix have always been the clear leaders in their respective industries -- e-commerce for Amazon and video streaming/DVDs-by-mail for Netflix. That isn't the case for Lyft, which is still playing second fiddle to Uber (although it has gained market share on its larger rival in recent years). Lyft is also currently operating only in North America, while Uber is a global company. And Lyft is potentially facing its own disruption in the form of autonomous vehicles, which are likely to shake up the ridesharing market one way or another.

The enthusiasm from the institutional investor class won't affect the challenges ahead for Lyft as it attempts to grow, take market share from Uber, and slow its rate of cash burn. But it does signal that the market is willing to give the company a long leash as it experiments, expands, and finds a way to build a sustainable business.

That sentiment should help prop up the stock in its first months -- or even years -- on the market, but Lyft will ultimately have to deliver results. Momentum and opportunity by themselves aren't enough, especially when Uber and a $911 million yearly loss are standing in the way.