It's been quite a month for dominant online video streamer Netflix (NASDAQ:NFLX). The company's market cap overtook telecom/media giant Comcast (NASDAQ:CMCSA) only days ago, and today has just become more valuable than Disney (NYSE:DIS) as shares hit an all-time high. It's a remarkable milestone, symbolizing the ongoing secular shifts in the media and entertainment industry.

It also helps that Netflix shares have gained over 80% year to date -- and it's only May. 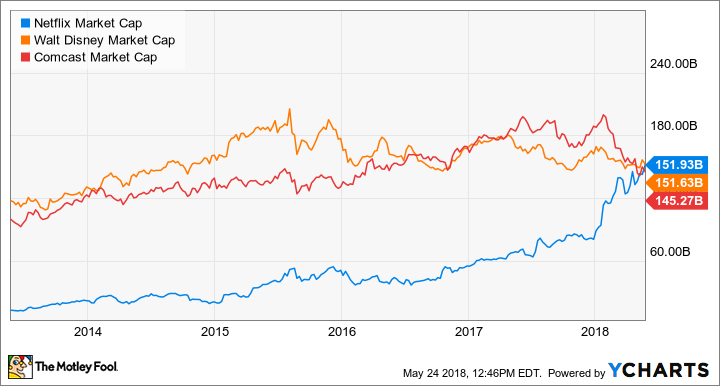 However, Netflix's operations and metrics still contrast sharply when compared to its traditional peers.

How the three companies compare on fundamentals and valuation

Disney is a massive conglomerate that owns media networks, theme parks, retail stores, movie studios, and more. Comcast was among the first major telecom companies to vertically integrate, buying up media in order to own the content that flows through its pipes. Netflix is a pure-play on over-the-top (OTT) streaming, one that has been aggressively growing its catalog of original content for years.

Still, it's worth stacking up the trio next to each other.

Data source: Morningstar. All figures shown on a trailing-12-month basis.

The differences in fundamental metrics are striking. Netflix is a much smaller company by these measures, despite now having a comparable market cap, which speaks to the lofty valuation metrics that Netflix fetches.

Visionary companies that define the futures of industries often command richer valuations than incumbent peers, which is what investors see playing out here with Netflix. The company had a strong first-mover advantage with the shift to OTT services, and enjoys robust pricing power, boosting subscription fees just a few months ago with no meaningful adverse impact on subscriber figures.

Netflix's success is largely why Disney is preparing its own OTT streaming service, once the House of Mouse pulls its content from Netflix next year. Comcast has been a bit slower to adapt to cord-cutting and the growing popularity of OTT services, although it is a partial owner of Hulu, with a 30% stake in that streaming platform. Hulu said earlier this month that it hit 20 million U.S. subscribers.

Just in case it wasn't clear by now, OTT streaming is the future of media.