Please ensure Javascript is enabled for purposes of website accessibility
Log In Help Join The Motley Fool
Free Article Join Over 1 Million Premium Members And Get More In-Depth Stock Guidance and Research
By Will Healy - Jan 26, 2021 at 7:27AM

For now, investors should focus on the company's ability to craft further gains in 2021.

Etsy (ETSY 6.21%) has crafted a unique niche in the e-commerce community. The focus on promoting craftspeople has helped it embroider a special place in the hearts of artisans and investors. Consequently, Etsy stock experienced a massive surge in both user growth and investor interest. However, this led to a massive increase in the stock that may leave investors questioning whether Etsy is still a buy.

Why Etsy stands out

Investors should understand that Etsy sees itself as a community of craftspeople, one where "real people connect over special goods." Despite its role in e-commerce, it works to keep what it calls a "human connection at the heart of commerce."

The fact that it is more than just a "Shopify for artisans" has stoked massive growth in the numbers of sellers and buyers alike. In addition to its community, Etsy also offers support in areas such as website design, order management, and communications tools to connect with buyers. The company also helps to direct prospective customers. Using personal profiling, Etsy can suggest gift ideas, offer personalized tips, and deliver exclusive deals. 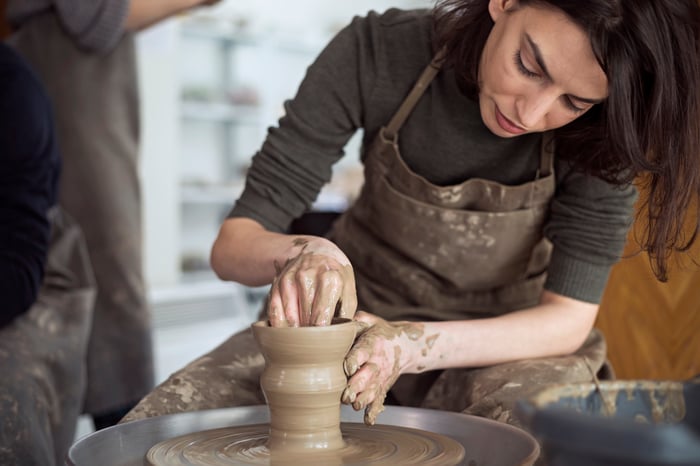 As of the latest quarter, almost 3.7 million sellers now utilize the site, a 42% increase from the same quarter last year. However, the largest increases in activity occurred on the buyer side. In the most recent quarter, the site attracted 69.6 million active buyers, up 55.4% from the 44.8 million that shopped on the site during the same quarter the previous year.

Also, gross merchandise sales (GMS) rose by 119% during that period to over $2.6 billion, indicating that Etsy's base of shoppers increased their spending compared to year-ago levels. Etsy sold $264 million worth of facemasks in Q3. Still, masks only accounted for approximately 20% of the GMS growth. Etsy's largest category remains homewares and home furnishings. It made up $772 million of GMS in Q3 and increased by 126% year-over-year.

Additionally, the increase occurred as the proportion of international sales rose from 33% to 37% of all GMS from Q2 2020 to Q3 2020 alone. This shows that Etsy's approach can also gain a following outside the U.S.

This increased interest has translated into dramatically improved numbers for both the top and the bottom lines. In the third quarter, revenue for the company climbed to about $451.5 million. That's a 128% increase from the third quarter of 2019, and it helped net income rise by 520% to just under $91.8 million.

Two factors explain the spike in net income. For one, earnings grew from a modest base of only $14.8 million in the third quarter of 2019. Also, the increase in most expenses, including the cost of revenue, was well under 100%. Marketing was the only expense that grew faster than revenue, surging by more than 150%.

However, the marketing spending that has gone into improvements could pay off in future quarters. The company has spent more heavily on marketing tech, TV ads, and paid social. Also, Etsy credited increased performance marketing in core European markets with the aforementioned growth in international GMS.

Investors have taken notice of this growth. Over the last 12 months, this consumer discretionary stock has risen by approximately 320%, according to YCharts. 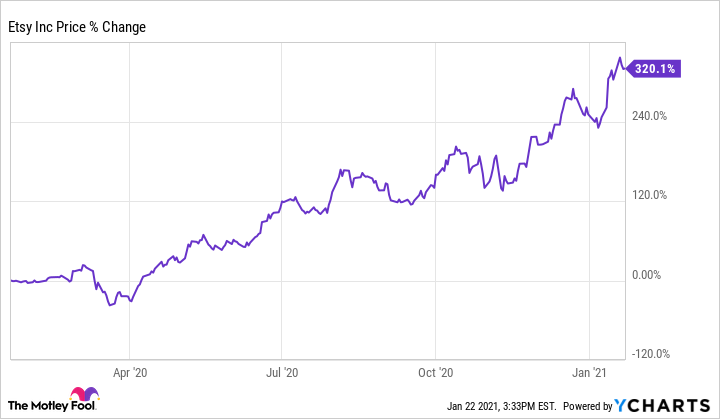 That increase has also affected the earnings multiple. Etsy now trades at a P/E ratio of approximately 118, a massive surge from year-ago levels, when Etsy sold for around 68 times earnings.

Still, while some may see Etsy as a top growth stock for 2021, not everyone agrees. CEO Josh Silverman painted a more cautious picture for 2021 in the Q3 2020 earnings call. He cited a "significant amount of uncertainty," specifically regarding what Etsy's business might look like should consumer spending decline or if more shoppers turn back to offline shopping.

Additionally, Silverman declined to make any numerical projections. He said the company would exercise caution in its planning for 2021 and encouraged analysts to do the same.

Should I buy Etsy now?

Etsy has shown that it can thrive amid a pandemic. Also, it continues to post substantial growth abroad and its marketing initiatives appear to have resulted in rising GMS across all markets. Hence, even if the end of the pandemic causes a temporary slowdown, I see no danger to Etsy's long-term growth pattern.

However, the P/E ratio has expanded significantly. Consequently, investors could begin to question the multiple if uncertainty gives way to struggle in the near term. Hence, I would discourage buying Etsy at these levels.

Nonetheless, any stock correction or post-pandemic recovery could become an excellent time to add positions in Etsy stock.