Please ensure Javascript is enabled for purposes of website accessibility
Log In Help Join The Motley Fool
Free Article Join Over 1 Million Premium Members And Get More In-Depth Stock Guidance and Research
By Prosper Junior Bakiny - Jan 27, 2021 at 6:14AM

It's been a rocky past few months for the biotech, but is now a good time for investors to pull the trigger?

Last year, many biotechs were at the forefront of the fight against COVID-19, and investors responded by sending their shares higher. The SPDR S&P Biotech Index ETF -- an industry benchmark -- is up by 73% over the past 12 months, compared with gains of 17% for the S&P 500. One drugmaker that made a lot of noise last year was Gilead Sciences (GILD 0.90%). In May 2020, the company's antiviral drug, remdesivir (marketed as Veklury), became the first COVID-19 treatment to receive emergency use authorization (EUA) and then formal approval from the U.S. Food and Drug Administration (FDA).

Several other countries also gave the green light to this drug, including Japan and many European nations. Given these developments, one would expect the company's stock to have outperformed the market recently, but the opposite is actually true: Despite rising sharply in the first half of 2020, its shares are up by only 7% in the past year. Is now a good time to scoop up shares of Gilead Sciences? 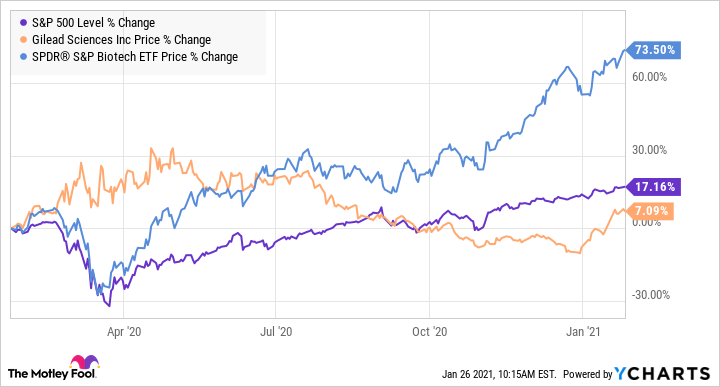 One of the main reasons why Gilead's stock has cooled down recently is the regulatory setback related to its potential blockbuster drug filgotinib. The company had high hopes for the rheumatoid arthritis (RA) treatment: Management believed it could help RA patients achieve remission (a state in which the symptoms of the disease are under control) faster than competing medicines.

However, in August 2020, Gilead announced that the FDA had declined to approve filgotinib due to concerns regarding its potential impact on sperm parameters. The project isn't dead yet; the biotech is running clinical trials to test whether filgotinib does indeed affect sperm parameters, and it expects top-line data from these studies in the first half of this year.

If these results are positive, the FDA could still approve filgotinib. Gilead is also investigating the drug as a potential treatment for psoriatic arthritis, Crohn's disease, and other illnesses. Filgotinib could go on to have a great future, but the regulatory concerns surrounding the drug make its prospects uncertain. Can Gilead Sciences find other avenues for growth? 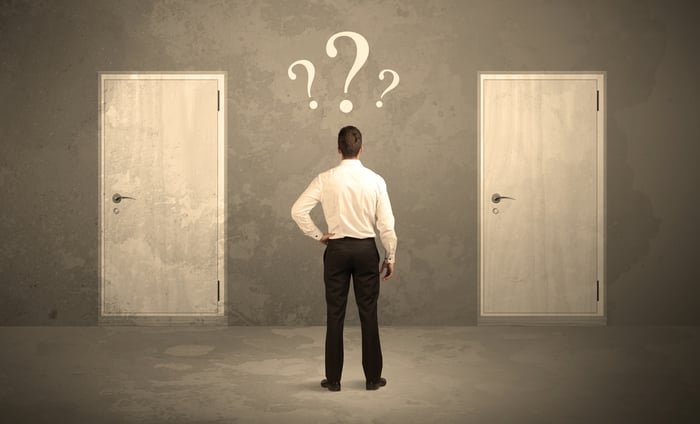 Remdesivir to the rescue

Gilead's COVID-19 treatment is clearly having a major impact on its top line. During its third-quarter 2020 that ended on Sept. 30, the company reported total revenue of $6.6 billion, 17% higher than the year-ago period. Remdesivir generated revenue of $873 million, and excluding the coronavirus medicine, sales of the company's products grew by a meager 2% to $5.6 billion.

On Jan. 11, Gilead Sciences provided an updated guidance for its fiscal year 2020, which ended on Dec. 31. The company now expects its product sales to be between $24.3 billion and $24.35 billion, up from its previous guidance of $23 billion to $23.5 billion. The new guidance would represent year-over-year growth of about 10%, and once again, remdesivir would be to thank for it.

Without the revenue from the COVID-19 treatment, the company's guidance indicates that its product sales would decline slightly compared with the fiscal year 2019. Unfortunately, remdesivir also seems to be facing some obstacles. First, in November, the World Health Organization (WHO) recommended against using the antiviral to treat hospitalized coronavirus patients because, according to the agency, there was no evidence that it improves survival or other outcomes in these patients.

Second, given that several vaccines for the disease have been approved, there will be less of a need for coronavirus treatments. Gilead will have to turn elsewhere for growth. The company's most promising area at the moment is its HIV lineup. According to CEO Daniel O'Day, Biktarvy, one of the company's top-selling HIV products, Biktarvy, has become "the gold standard in HIV treatment."

During the third quarter, Gilead Sciences' HIV sales grew by 8% to $4.5 billion. However, the company is also facing some headwinds in this area. A generic version of the drug Truvada became available for the first time in October 2020, and as a result, the biotech expects sales of this HIV drug to decline significantly. Biktarvy will likely continue to gain steam, but this growth will be offset in part by Truvada's declining revenue.

On the bright side, Gilead does have 42 clinical programs in its pipeline. The company will likely turn at least a handful of those into solid sources of revenue.

Gilead Sciences has long been one of my favorite biotechs, but the company is facing too many obstacles: filgotinib's regulatory setback, Truvada's generic competition, and the recommendation against using remdesivir from the WHO (not to mention competition from newly approved COVID-19 vaccines). I am inclined to believe Gilead will recover in the long run, but there is too much uncertainty with the company at the moment, and there are other biotech stocks that are much better options.