Please ensure Javascript is enabled for purposes of website accessibility
Log In Help Join The Motley Fool
Free Article Join Over 1 Million Premium Members And Get More In-Depth Stock Guidance and Research
By Taylor Carmichael - Jan 27, 2021 at 7:05AM

While it's already made some people rich, Axsome Therapeutics is just getting started.

Yep, that's right, shares from Axsome zoomed from $2 to $100 in a year. That's a 50-bagger. But this isn't a lottery ticket. This is an amazing biotech with multiple drugs in pivotal trials. And it's still early -- Axsome has a market cap under $3 billion. Here's why this millionaire-maker stock is a still strong buy today. 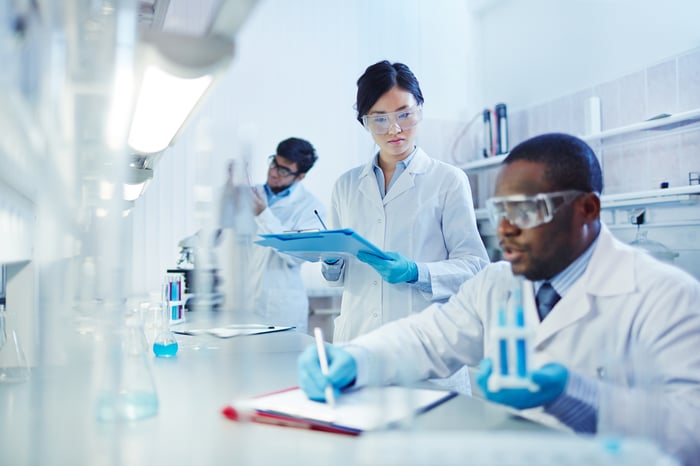 2 drugs are about to hit the market

Axsome has an outstanding pipeline. Its lead candidate is AXS-05, a drug with blockbuster potential. The U.S. Food and Drug Administration (FDA) has named this drug a breakthrough therapy in two indications: major depressive disorder and agitation caused by Alzheimer's Disease.

Axsome is prepping its new drug application (NDA) right now for AXS-05 to treat major depressive disorder. Approvals would bring a market opportunity worth over $9 billion globally. Investors are quite bullish on the candidate, because its phase 3 efficacy and safety data were so positive. The stock shot up 70% in a day when the results were announced. In Axsome's last earnings call, CEO Herriot Tabuteau said, "We expect to submit the NDA in January..." Since the FDA classifies this drug as a breakthrough therapy, it will be fast-tracked through the agency review process. While COVID-19 might slow this process down a bit, investors are expecting AXS-05 to hit the market in 2021.

It's a busy quarter for Axsome as the company will submit not one but two NDAs over the next couple of months. The second one is for AXS-07, the company's migraine drug. While migraine treatment is currently a small market (worth less than $2 billion worldwide), it's possible that Axsome's drug will expand this market opportunity. An estimated billion people around the world will have migraines in 2021.

The company has run three different phase 3 trials for its migraine pill, and all of them have been successful. The most recent trial, dubbed MOVEMENT (Multimechanistic Treatment over Time of Migraine Symptoms), had 706 patients who used the medication to treat 21,000 migraine attacks. Over a third of the patients were pain-free within an hour, and two-thirds were pain-free within two hours.

The pipeline has great depth

What's exciting investors about the company's lead pharmaceutical, AXS-05, is that it might successfully treat multiple indications. So while it's status as a treatment for major depressive disorder could make the drug a blockbuster on its own, revenues will escalate even more if the FDA approves the drug for treating agitation in Alzheimer's (a $3 billion market opportunity) or approves it for use in helping people stop smoking (at least a $4 billion market). Axsome will start a phase 3 trial for AXS-05 in treating Alzheimer's agitation in a few months.

In addition, Axsome has two more drugs in pivotal clinical trials. AXS-12, yet another drug the FDA has classified as a breakthrough therapy, is a narcolepsy drug that will enter phase 3 trials later this year. Narcolepsy -- a condition by which people suddenly fall asleep in the daytime -- is a major opportunity for Axsome, with the market projected to hit $5 billion by 2026.

Then there's AXS-14, a treatment for fibromyalgia, which is a disorder characterized by musculoskeletal pain, fatigue, and sleep issues. Pfizer originally developed the drug over a decade ago, and had positive phase 3 data, but decided not to pursue the opportunity commercially. Axsome acquired the rights for $3 million in cash and $8 million in stock. If Axsome achieves success with the drug, Pfizer could garner an additional $323 million in milestone payments.

Overall, Axsome has two drugs that will probably launch this year, AXS-05 for major depressive disorder and AXS-07 for migraine. The company projects the narcolepsy and fibromyalgia drugs will launch in 2023, and that AXS-05 will be approved for Alzheimer's disease agitation that same year. From this group of drugs, Axsome's high-end estimate of peak annual sales is $9 billion.

While Axsome's stock is not going to produce another 50-bagger anytime soon, the future appears very bright. The company's market cap now is $2.73 billion. Two drug approvals in 2021 should move the needle significantly higher. And the upside for the rest of the decade is significant. I don't think it's at all too late for investors to jump on the bandwagon.