Please ensure Javascript is enabled for purposes of website accessibility
Log In Help Join The Motley Fool
Free Article Join Over 1 Million Premium Members And Get More In-Depth Stock Guidance and Research
By Rich Smith - Jan 27, 2021 at 11:22AM

Europe puts Google in the crosshairs over competition and data collection concerns.

Shares of internet search giant Alphabet (GOOG -2.87%) (GOOGL -3.10%) fell 5% in early trading on the Nasdaq Wednesday, probably because of press reports of new governmental action against the tech giant in Europe that emerged midday Tuesday. 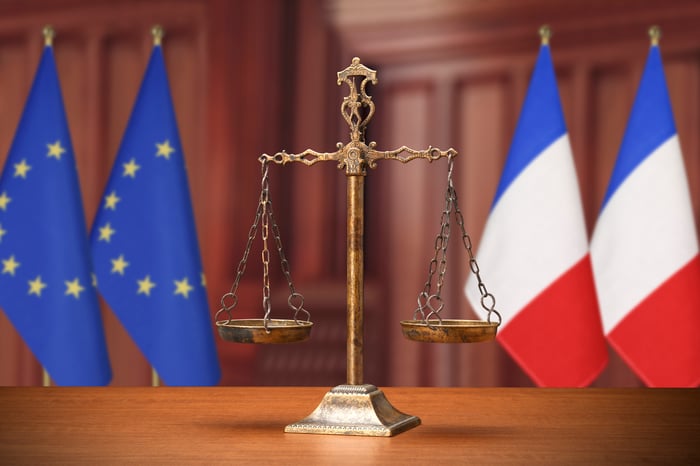 As Business Insider reported early in the day, the European Commission has asked "a host" of advertising firms to comment on Google's practices in Europe, specifically, how Google runs its digital advertising service and how it gathers data on consumers. The EC is said to be collecting information that it might later use within the context of a proposed Digital Markets Act to sue Alphabet to restructure its business.

Later in the day, Bloomberg followed up with a story on how one of Europe's most influential leaders, French President Emmanuel Macron, is warning U.S. tech giants to refrain from any "unfair practices."

The heightened temperature of the debate elevates the risk that, under a proposed Digital Services Act (a new law proposed in tandem with the Digital Markets Act), for example, Google might face fines of as much as 6% of global revenue if it fails to remove "illegal content," reports Bloomberg. If Google is found to be favoring its own products over those of competing companies, the fines could reach into the billions of dollars -- with the added risk that competition authorities might seek to "break up" Alphabet.