Please ensure Javascript is enabled for purposes of website accessibility
Log In Help Join The Motley Fool
Free Article Join Over 1 Million Premium Members And Get More In-Depth Stock Guidance and Research
By Alexander Carchidi - Jan 28, 2021 at 5:20AM

These two stalwarts are selling at dramatically different valuations.

When you're picking investments for the long term, it pays to be thrifty. Buying stocks that are too pricey for their level of earnings can set your portfolio up for a bruising. In contrast, if you can invest in quality companies at a fair price, you'll often get the growth that you paid for.

Abbott Laboratories (ABT 3.05%) and Intuitive Surgical (ISRG 2.53%) are a pair of stocks that I stand behind, and both companies are working to increase their revenue to build on their long-term successes. But at the moment, I'd only be willing to buy more of one of the two -- let's take a look at why.

Abbott Labs is a key company in the response to the pandemic, as it makes diagnostic tests for COVID-19 as well as a cornucopia of other critical goods for hospitals and consumer health. It recently delivered a stunning 150 million of its coronavirus diagnostic tests to the U.S. government, and millions more are shipping out to other customers worldwide. With sales volume like that, it's no surprise that its diagnostics segment grew its revenue by 38.8% in the third quarter of 2020 compared to the same quarter in 2019.

As long as the coronavirus keeps spreading like it has been, Abbott will have no shortage of testing orders to fill, and it has constantly developed new diagnostic solutions to meet demand. Elsewhere in its product portfolio, the company is launching new smartphone apps to assist patients with calibrating their pain control treatments, as well as a new immune system-supporting formulation of the consumer health nutrition product Pedialyte. These new launches may boost its revenue slightly over the next year, but coronavirus testing will probably be the more significant driver of growth. Either way, investors will continue to enjoy the company's policy of increasing its dividend year after year.

Intuitive Surgical's future is bright, perhaps even more so than Abbott Laboratories'. Intuitive makes robotic surgical suites that are used in a growing number of minimally invasive surgeries. Robotic surgery is a field that's still in its early days, and over the last decade, the company has proven itself to be the leader in the emerging space. Between its new venture capital arm devoted to investing in robotics start-ups and its demonstrated ability to grow its revenue by improving on and developing new tools for its da Vinci surgical suites, Intuitive is outrageously innovative. What's more, it has no direct competitors that are of a similar size -- for now.

Investors will also be interested to hear that it has no debt. And with $4.78 billion in cash, it's loaded with fuel for future growth. So Intuitive can focus on expanding its market penetration and investing in future revenue streams in the form of new products. Given that each of its surgical robots requires regular maintenance and disposable tools to operate, every new system installed means that the company secures significant recurring revenue. But the pandemic has strained healthcare systems and subsequently reduced the number of surgeries that people are getting with its surgical robots. Thus, its fourth-quarter revenue only increased by 4% year over year, which contributed to its stock slipping. 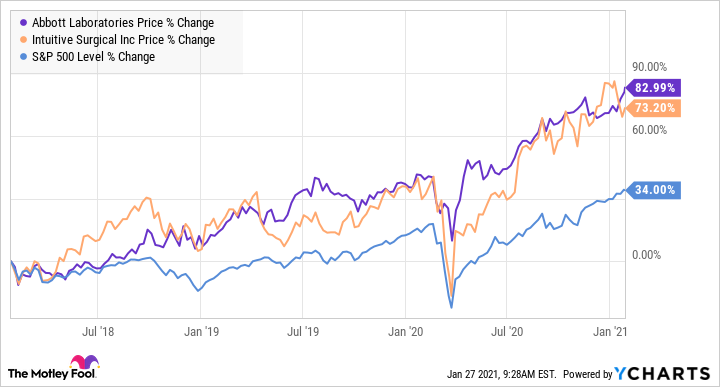 Where should you invest?

Right now, Abbott Laboratories is the better buy because its business is surging at the precise moment that Intuitive is struggling. It's also being sold at a bargain compared to Intuitive. Its trailing price-to-earnings (P/E) ratio of 61 is significantly lower than Intuitive's 86, as is its price-to-sales (P/S) ratio of 6 compared to Intuitive's 21. In other words, Intuitive is a much more expensive stock for each dollar of sales revenue and earnings. This dynamic will remain in place for at least another year, especially as Abbott expands its portfolio of coronavirus tests. Similarly, Intuitive's valuation seems to be pricing in a return to the rapid level of growth that the company was experiencing before healthcare systems were slammed during the pandemic, which investors simply cannot take as a given in the short term.

But if I could cheat and make another long-term recommendation -- I'd fully endorse both stocks. The economic impact of the pandemic has curbed Intuitive's growth for the time being, but it won't last forever. Likewise, whenever the pandemic starts to subside, Abbott's outsized revenue growth from coronavirus diagnostic tests will start to taper. So, while Abbott is the better buy right now, in a few years the situation could easily be reversed.