Please ensure Javascript is enabled for purposes of website accessibility
Log In Help Join The Motley Fool
Free Article Join Over 1 Million Premium Members And Get More In-Depth Stock Guidance and Research
By Adam Levy - Jan 28, 2021 at 7:30AM

ByteDance's TikTok topped the 2020 app download charts in the U.S. and around the world as users continued to flock to the short-form video app. Eighty-nine million American smartphone users installed TikTok in 2020, according to data from Apptopia, besting Instagram (62 million), Facebook (FB -0.49%) (53 million), and Snap's (SNAP 2.07%) Snapchat (51 million) by a wide margin.

Despite the popularity of the foreign app, both Facebook and Snap managed to keep growing in 2020. Snapchat added 6 million North American users for the 12 months ending in September, and Facebook added 7 million in the same period. (Facebook doesn't report user numbers for Instagram.)

Investors are more bullish than ever on Snap. But as TikTok continues to penetrate the market, it's likely to take away time spent and user engagement from other apps. And Snapchat is most likely to see engagement drop with the rise of TikTok. 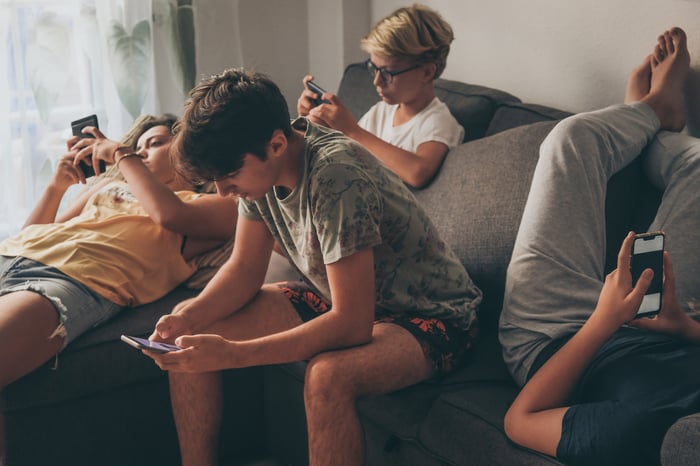 At the start of last year, Snap CEO Evan Spiegel shared how he thinks about the social media landscape. He said content and the platforms distributing it fall into a pyramid. "At the base of that pyramid -- the very broad base -- is self-expression and communication. And that's really what Snapchat is all about," he told the audience at the Digital Life Design Conference last year in Munich. "And then sort of at the top of the pyramid, which I think is represented by TikTok, is really talent," he added.

But a lot can change in a year.

Snap is increasingly focused on developing and promoting content on its Discover platform. The growing engagement it's seeing -- 50% increase in time spent during Q3 -- is the top highlight of its quarterly updates. Those Shows, as Snap calls them, are much closer to the top of Spiegel's pyramid model than the base. They're also an important revenue growth driver for Snap, supporting its six-second Commercial product.

Meanwhile, TikTok has been adopted more broadly, and it's no longer just a talent showcase. Users are sharing all sorts of content, from random funny things that happened to them that day, to a new outfit they love, to financial advice.

Furthermore, TikTok encourages users to participate in content they enjoy with its ability to reuse audio and its duet feature, which lets users post a split-screen video with the original on one side and their reaction or addition on another. That can lead to viral moments, like when users embraced a particular sea shanty.

As a result, the content profiles of Snapchat and TikTok have started overlapping much more than Spiegel suggested a year ago. Meanwhile, Instagram offers a differentiated sharing platform for creators and influencers, and it's making progress on monetization as well with its commerce features.

As TikTok continues growing in the United States, Snapchat may have a tough time keeping up its reinvigorated momentum from the last couple of years. Analysts at eMarketer expect its market penetration to top out in 2021 at 40.1% before stagnating through the first half of the decade. They expect TikTok's penetration to match Snapchat's by 2024.

Snap still has some growth vectors: It's expanding much faster in international markets and it's seeing strong adoption from marketers for its commercial product. But its largest and most valuable market may see slower growth ahead as TikTok steals users and engagement.