Please ensure Javascript is enabled for purposes of website accessibility
Log In Help Join The Motley Fool
Free Article Join Over 1 Million Premium Members And Get More In-Depth Stock Guidance and Research
By Keith Speights - Jan 29, 2021 at 6:01AM

Here's how they could generate returns of 100% or more.

You could throw a dart at a list of growth stocks and have a pretty good chance of landing on one that doubled or came close to it last year. 2020 wasn't an ordinary year for investors by any means, though, and there's no guarantee that this year will be as rewarding.

Still, some stocks are likely to perform well. Here are two growth stocks that could even realistically double in 2021. 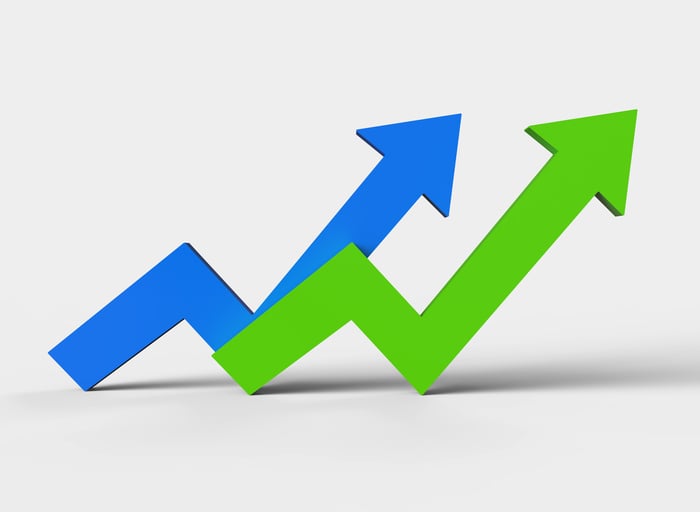 Cresco Labs (CRLBF 0.97%) delivered an impressive return of 44% last year. It's off to a great start in 2021, with shares soaring more than 20% year to date already. I think that Cresco has what it takes to turn that solid double-digit gain into a triple-digit one.

Let's start with Cresco's underlying business. The company currently operates in nine states. These include six of the 10 most populated states with legal cannabis markets. Cresco is also a leader in its home state of Illinois, which boasts a fast-growing recreational marijuana market. The company is also a top wholesale distributor in the biggest market of all -- California.

I think that Cresco will be able to continue generating strong revenue growth as these existing markets expand. Several of them are only in their early stages. Even a mature market like California still has plenty of room to grow.

Even better, Cresco has plenty of opportunities to move into new markets. The company recently announced plans to expand into Florida's medical cannabis market by acquiring Bluma Wellness. Although Florida's market is dominated by a couple of big players, Cresco should be able to achieve some success of its own.

Arizona and New Jersey residents voted to legalize recreational marijuana. Cresco should be in a good position to compete in both of those markets as well. It's also likely that New York will follow in New Jersey's footsteps, opening up a massive new opportunity for Cresco.

Cresco's market cap isn't nearly as large as several of the other leading multistate cannabis operators despite generating similar revenue in the last quarter. As the overall potential market for Cresco grows, I think its stock will also increase significantly and could very well double in 2021.

Jushi Holdings (JUSHF 1.37%) didn't just double in 2020; its stock more than quadrupled. Like Cresco Labs, Jushi is a high-flying marijuana stock that should have a lot more room to run this year.

The company recently opened its 16th retail cannabis location nationally. It holds the rights to open another 16 stores in the four states where it currently operates. Jushi expects to launch up to 12 new stores this year. I think this expansion will help drive the stock higher over the next few months.

As is the case with Cresco, Jushi has other opportunities to grow by moving into additional markets. There could also be a couple of other factors beyond Jushi's control that could serve as major catalysts. Both relate to the change of power in Washington, D.C.

The Democratic-controlled U.S. Congress could pass legislation to remove restrictions on access to financial services for cannabis companies. Congress could also pass a bill that decriminalizes marijuana at the federal level. If these efforts are successful, they could pave the way for Jushi to more easily borrow money for growth, as well as list its shares on a major U.S. stock exchange.

I suspect that these changes by themselves could be enough to enable Jushi's shares to double in 2021. They would also provide a huge boost for Cresco Labs stock as well.

To be sure, neither Cresco nor Jushi is guaranteed to double this year. An overall stock market crash -- especially one later in the year that leaves little time for stocks to recover by year-end -- could prevent the stocks from racking up huge gains.

There are also other obstacles. Scandals and unexpected executive departures can zap a stock's momentum. It's also possible that Cresco and Jushi could simply make mistakes that impede their growth. However, my view is that barring something unexpected, both of these U.S. pot stocks have a great chance of delivering returns of 100% or more in 2021.