Please ensure Javascript is enabled for purposes of website accessibility
Log In Help Join The Motley Fool
Free Article Join Over 1 Million Premium Members And Get More In-Depth Stock Guidance and Research
By Taylor Carmichael - Jan 29, 2021 at 7:15AM

It's possible that Wall Street has the wrong idea about what kind of company this video game publisher really is.

Activision Blizzard (ATVI 1.90%) is kind of a misfit in the investment world. It pays a dividend, so you might expect it to be a mature business with slow growth rates. But you'd be wrong. Activision Blizzard increased its revenues by 52% year over year in its most recent quarter, and profits jumped almost 200%. This is a fast-growing business right now.

Maybe it's a temporary bounce related to the COVID-19 pandemic, and growth will slow significantly once we're all vaccinated. That's possible. But there's another possibility. Maybe the market has mispriced Activision Blizzard -- significantly. 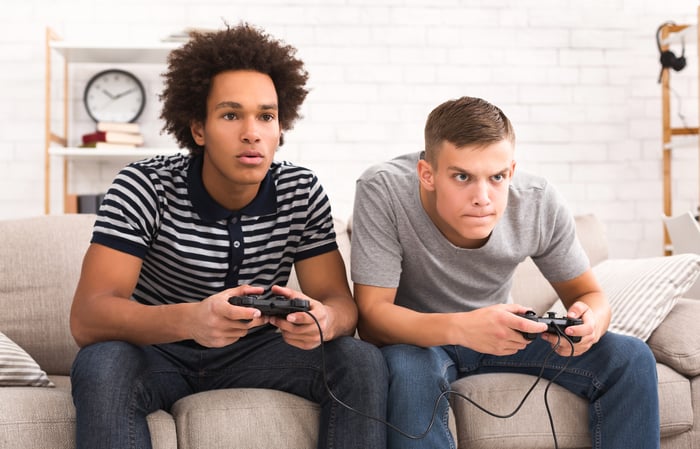 One common cause of valuation mistakes in the stock market is compartmentalization. Investors tend to put stocks in categories, and then measure how they are doing compared to their peers. So we say Activision Blizzard is a video game stock, and we measure it against Electronic Arts, Take-Two Interactive, and Ubisoft.

While it can be helpful to divide stocks in this manner, sometimes it can mislead us. An entire sector might be overvalued, or undervalued, and if you are simply evaluating the peer group, you might be looking at trees and missing the forest.

Also, some stocks are hard to define. Is Amazon a retailer or a tech stock? Should Sea trade like a gaming company, or is it a retailer? (Or a bank?!) I would argue that those tweeners -- to borrow a term from sports -- are often undervalued because their businesses have so much optionality. What the market sees as a difficulty (how do I value this business?) is actually a positive.

While it's true that this is a consumer-facing business (the pure "tech stock" only deals with companies on the back end), it's also producing software that you can download from the internet. In fact, Activision Blizzard now has a strong software-as-a-service (SaaS) component. People subscribe to some of the company's games, giving it (in part) a revenue-generating model similar to the likes of Shopify or Okta.

Sometimes investors can profit from out-of-the-box thinking. If Activision Blizzard operates partly on an SaaS business model -- one that might expand in the future -- maybe the company's P/E ratio will expand once the market wakes up to what is going on.

The gaming industry has been slow to shift to the software-as-a-service model. This is a major transition that has happened throughout the wider software industry. That's because the old model was pretty bad. Companies would pay millions to have expensive software installed across their enterprises, and it could take months to do it. In retrospect, it was kind of insane. No wonder most everybody switched to SaaS.

Gaming software, though, is a lot simpler (and cheaper) to install. You buy it, you put the game in your machine, and you play. So this model survives and thrives. A lot of gamers like the big expensive hardware, and when a new system comes out, they happily pay to upgrade their consoles and game libraries. Both Microsoft and Sony just upgraded their gaming consoles (Xbox and PlayStation, respectively) during the holiday season, so we should expect a surge in video game sales over the next couple of years. That should be a strong tailwind for Activision Blizzard, in and of itself.

SaaS is a wonderful business model because it's habit-forming and sticky. Distribution is a lot easier and upgrades are continuous.

Another way to think of it is that Activision Blizzard is becoming a streaming entertainment business -- in which case, the market might begin comparing its stock to other streamers. What would it be like if the stock market started valuing Activision based on multiples similar to those of Netflix (NFLX 5.03%)?

It's not hard to imagine a future when Activision Blizzard has morphed nearly completely into an online gaming platform, a place where all its players subscribe to play. It's already there with World of Warcraft. Maybe one day that will happen with Call of Duty as well.

Activision Blizzard is a buy

I suspect Activision Blizzard is going to be a fantastic stock over the next several years, as we've just started a new console cycle. But for me, the most exciting prospect is an industrywide shift to online assets. Gaming is already a bigger industry than movies. It seems to me to be a no-brainer that this software company will ultimately transition to a primarily SaaS model. I expect Activision Blizzard (and its shareholders) to ride that wave, and make a lot of money.