Please ensure Javascript is enabled for purposes of website accessibility
Log In Help Join The Motley Fool
Free Article Join Over 1 Million Premium Members And Get More In-Depth Stock Guidance and Research
By Scott Levine - Jan 29, 2021 at 7:31AM

Of these two green energy options, it's the lesser-known name that can electrify investors' returns.

With the U.S. rejoining the Paris Agreement on the day President Biden moved into the Oval Office, attention is being focused on renewable energy stocks. It's not as if they've been flying under investors' radars of late. In 2020, for example, the Invesco WilderHill Clean Energy ETF, an exchange-traded fund with a variety of renewable energy stocks among its holdings, skyrocketed more than 200%.

For those interested in greening their portfolios with renewable energy stocks, choosing the best route may seem overwhelming and fraught with excessively risky options. Warm up to a solar stock? Sail away with a wind-power provider?

Instead of fretting over the choice, investors would be well served by Infrastructure and Energy Alternatives (IEA -4.14%) while keeping their distance from FuelCell Energy (FCEL -3.69%). 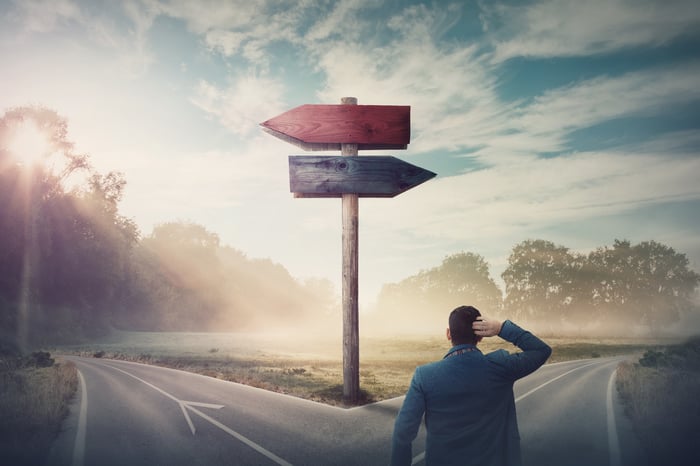 Harnessing the power of both sun and wind

Whereas many of the familiar names in renewable energy have only been around for a moderate amount of time, Infrastructure and Energy Alternatives (IEA) has been in business for more than 70 years. During that time, the company has helped develop more than 200 utility-scale wind and solar projects. While the company also has an interest in civil engineering, including bridge construction and rail maintenance, its renewable energy projects contribute the most to the top line: about 66% of revenue for the first three quarters of 2020.

With projects totaling $1.9 billion in its backlog at the end of the third quarter, IEA has seen a slowdown in demand due to COVID-19. The start of 2021, however, suggests that business may be picking back up. In January, the company secured orders for two wind-power projects totaling $145 million. It also signed a deal for a 100 megawatt solar project in Georgia, though financial terms weren't released. And with President Biden continuing to signal his enthusiasm for renewable energy, it's likely that this will translate to growing business for IEA. 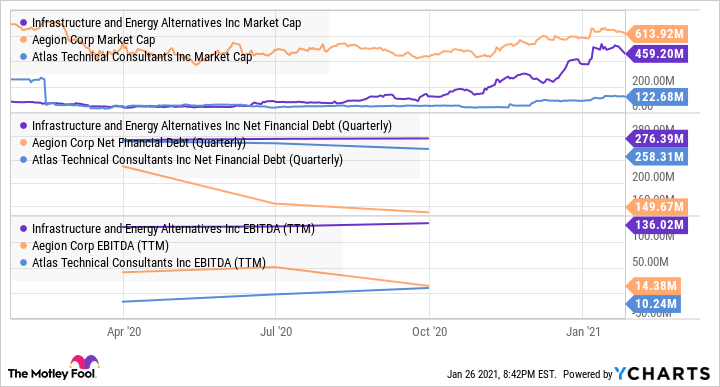 For example, Aegion and Atlas Technical Consultants had net debt-to-EBITDA ratios of 10.4 and 25.2, respectively, as of the end of the third quarter.

Valued at 5.6 time operating cash flow, shares of IEA may appear expensive considering their multiple for 2020 was 4.5. But I'd gladly pay a slightly steeper price tag for a company that I believe has plenty of growth ahead. And by another metric, shares seem to be trading at steep discount: At 0.2 times trailing sales, the stock looks attractive considering the S&P 500 multiple is 2.8.

Don't hitch your wagon to this much-hyped hydrogen name

In all likelihood, IEA is not a name that many investors (whether focused on renewable energy or not) are familiar with. On the other hand, after its stock skyrocketed 345% in 2020, FuelCell Energy is a business that even casual followers of the clean energy space probably recognize. With enthusiasm for the hydrogen economy ramping up considerably over the past year, FuelCell Energy, which designs, constructs, and operates of fuel-cell power plants, is one of the few publicly-traded options available to hydrogen-minded investors.

Although it's very possible that FuelCell Energy benefits from the global embrace of hydrogen, there are some lurid red flags. For one, the company has done an inadequate job growing its top line. Interest in the hydrogen economy has really taken off fairly recently, and FuelCell Energy's peers, Bloom Energy and Plug Power, have succeeded in growing sales. 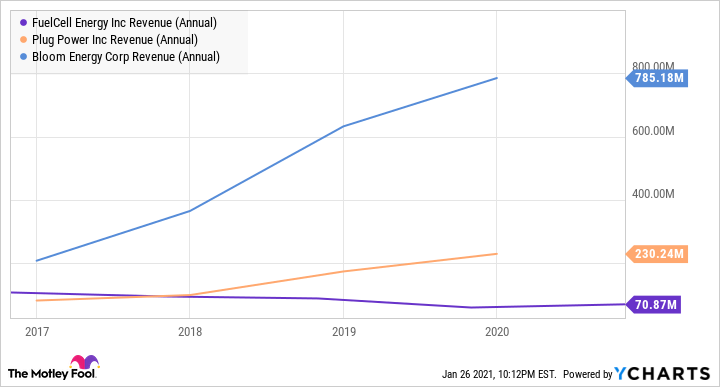 Equally concerning is the company's inability to generate positive cash flow or a profit on an EBITDA basis. 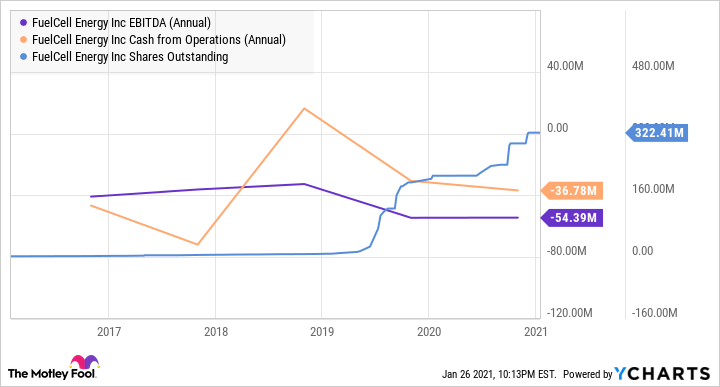 As a result, the company has resorted to raising capital through the issuance of equity, thereby diluting shareholders. This will surely recur in the near future as it's unlikely that FuelCell Energy will start generating cash organically anytime soon.

Extending their upward momentum from 2020, shares of FuelCell Energy have ripped 91% higher so far in 2021. As a result, shares have reached an exorbitant valuation. Since the company is unprofitable and doesn't generate positive cash flow, traditional valuation metrics are useless here.

Instead, we can assess the stock price in terms of sales. In doing so, we find that shares are valued at 56.5 times trailing sales, a frothy valuation considering their five-year average multiple is 2.3, according to Morningstar. Even if you're an investor willing to skip the bargain bin and pay a little extra for a promising stock, FuelCell Energy doesn't fit the bill; a price tag perched in the stratosphere is simply too unattractive.

IEA is one green energy stock to get charged up about

Savvy investors recognize that renewable energy stocks are a compelling option for growth investors at the moment. And while FuelCell Energy may flourish in some way over the next few years, the company's perilous financial health at the moment makes it simply too risky. Instead, investors would be better off with the much more attractive IEA.