The stock market has seen a lot of ups and downs this week, but on Friday, the mood was decidedly negative. At 1:45 p.m. EST, the Nasdaq Composite (^IXIC -0.30%) was down almost 2%, trading near its worst level of the day and moving in line with other stock market benchmarks.

So many Nasdaq stocks have put up incredibly strong performance over the past year that investors have almost forgotten how to handle difficult market conditions. Shares of Tesla (TSLA -6.42%), for instance, were up more than 700% in 2020, but they declined more than the overall market on a percentage basis on Friday. However, Moderna (MRNA -4.97%) was a rare winner on the Nasdaq, as competitive pressures eased up on the company at least a bit.

A milestone in reverse

Shares of Tesla were down almost 5% in midafternoon trading on Friday. That took the share price just below the $800 mark for the first time in three weeks.

It's been a momentous week for Tesla investors. Fourth-quarter earnings results came out, adding some color to the delivery and production numbers that the electric-auto maker had released earlier in the month. Tesla also gave details on some new features for its high-end Model S and Model X vehicles, which many investors have neglected to follow since the mass-market Model 3 started to dominate production runs.

It's easy to fall into the trap of thinking that a stock price dropping through a round figure really makes any fundamental difference to the company. Tesla remains on the pole position in the EV space, with others racing to try to catch up. CEO Elon Musk gave details on various initiatives to ensure Tesla's continued supremacy, including the status of factory construction worldwide and the latest research and development efforts.

Tesla shareholders have become used to stock price volatility, and that's not going to change anytime soon. But long-term investors can take solace in the fact that Tesla's business looks like it's at peak performance even as the share price sinks a bit. 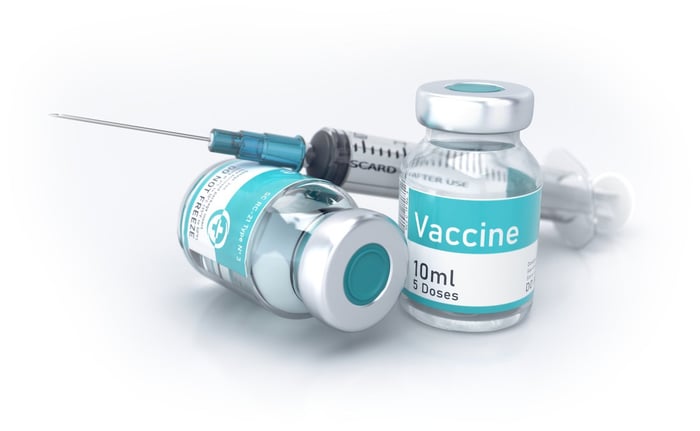 Elsewhere, Moderna shares were up 9%, bucking the down trend on Wall Street. The stock price got a shot in the arm from the bad news of a fellow pharmaceutical peer trying to fight the COVID-19 pandemic.

Johnson & Johnson (JNJ 1.75%) said on Friday that its one-shot coronavirus vaccine failed to demonstrate the extremely high effectiveness that many had hoped to see. The efficacy of J&J's vaccine came in at 66% in preventing moderate and severe disease, 85% against severe disease alone, and fully effective to prevent hospitalization and death from the virus. Figures differed a bit by geography, including 72% effectiveness in the U.S. and 57% in South Africa, which has seen a recent new variant of the disease come up.

Those numbers are far below Moderna's 94% effectiveness rate. J&J argued that earlier trials didn't take newly mutated variants of COVID-19 into account, thereby adding an extra challenge for the Johnson & Johnson trials. Nevertheless, the failure of J&J to come up with a highly effective vaccine that requires just one dose and avoids special handling was enough to give Moderna a boost.

Given the challenges we've seen thus far in vaccine production and distribution, it's likely that everyone with a viable vaccine will end up a winner. Nevertheless, investors are still playing favorites, and the news today worked in Moderna's favor.