Please ensure Javascript is enabled for purposes of website accessibility
Log In Help Join The Motley Fool
Free Article Join Over 1 Million Premium Members And Get More In-Depth Stock Guidance and Research
By Adam Levy - Feb 1, 2021 at 11:30AM

Your favorite store might shut its doors for good this year.

A lot of brick-and-mortar retailers had a tough time in 2020 as the COVID-19 pandemic forced them to close their doors to customers. Those that adapted to the new environment with online ordering and curbside pickup did relatively well as consumers shifted to e-commerce since they couldn't (or wouldn't) go in stores.

But not everyone fared so well; 2020 saw 8,741 stores across the United States close their doors, according to data from Coresight Research. And it's going to get worse for a lot of retailers in 2021. 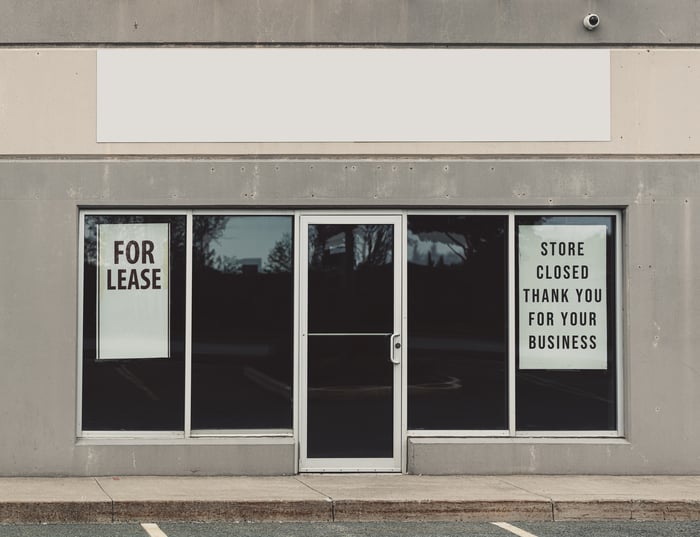 Store closures actually declined in 2020 versus 2019. Retailers closed 9,832 stores in 2019 versus the 8,741 closed last year. Some retailers may have been able to stay open due to government programs providing additional funding and landlords offering rent reduction during the year. Others may have been holding out hope for a strong holiday sales rebound at the end of the year.

But those factors are now behind us, and many companies are faced with the tough reality that they'll need to close more doors. And fewer stores will open up in their place.

Retailers will likely open up more new stores in 2021 compared to last year, but not enough to offset the rise in closures. Coresight expects just 4,000 new stores this year, for a net loss of 6,000 for the full year, up 10% from 2020.

Not everyone will lose

Coresight CEO and founder Deborah Weinswig is actually optimistic for a bounce back in in-store retail sales this year, despite her expectation for increased net store closures. She thinks the vaccine rollout will help consumers get back to more shopping outings instead of ordering everything online. And that may be true for some retail segments, but not all.

Most notably, we should see a continuance of the trends we saw last year. Weinswig suggests the biggest losers last year, apparel retailers, will be the biggest losers this year as well. 40% of shoppers said they won't spend more on clothing in stores once they're vaccinated, according to a recent survey from First Insight. And if we go into another lockdown, 61% said it'd be an area where they cut back on spending.

Meanwhile, those retailers that have fared well during the pandemic could see improvements in 2021. Coresight says the 4,000 new store openings will be driven largely by growth from grocery discounters and dollar store chains.

Some of the biggest winners will be those retailers that are adapting their stores to serve more online shopping. Big box retailers Walmart (WMT 0.11%) and Target (TGT 1.26%) stand out as innovators around using stores as fulfillment centers.

Target said 95% of its total sales during November and December were fulfilled by its stores, a greater percentage than pre-pandemic despite a shift to more digital sales.

Walmart is planning to use its store footprint and existing supply chain to build out more local fulfillment centers for online orders. In that way, the same trucks can supply both stores and fulfillment centers with the same number of routes. Its massive footprint has also been instrumental in its rollout of online grocery ordering.

Meanwhile, pure online retailers like Amazon (AMZN 0.25%) should continue to gain market share of the overall retail industry. Amazon, in particular, is well positioned with the strength of its Prime membership program and as the premier destination for online product searches.

While we may be able to put the pandemic mostly behind us by the end of 2021, the retail trends we saw in 2020 look like they're going to have a more permanent impact on brick-and-mortar retailers. The big retailers stand to get bigger and the smaller retailers will get smaller.