College football's hiatus from the video-gaming market is ending soon. On Tuesday, video-game developer Electronic Arts (EA 1.96%) announced the revival of its exclusive collegiate football game franchise that hasn't released a new game since 2013 or sold one since 2014. EA is collaborating with the Collegiate Licensing Company (CLC) on the renewed effort to ensure the permissions needed to use team names and uniforms are properly procured.

The previous end of college football video gaming wasn't due to a lack of demand; Electronic Arts says its college football titles were typically among the best-selling games within the United States. Rather, complications with the uncompensated use of players' likenesses led to a lawsuit that in turn led to the decision to cancel the series. EA did not use specific players' names but did copy other details that strongly implied who a particular player was meant to be. 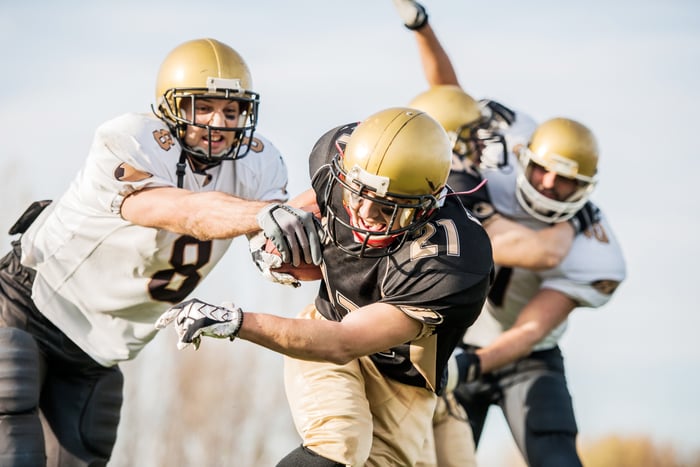 The issue remains in legal flux. The National Collegiate Athletic Association (NCAA) is considering rule changes that would allow for such compensation, although some state legislatures, and even the U.S. Congress, are weighing new laws that also address the matter. In December, New Jersey Senator Cory Booker unveiled legislation laying out collegiate athletes' rights to participate in the monetization of their sport. Neither EA nor CLC offered specifics as to how potential rule changes might impact game-play, though it may be too early to provide such details.

How EA Sports Is Putting Its Latest Acquisition to Use