Please ensure Javascript is enabled for purposes of website accessibility
Log In Help Join The Motley Fool
Free Article Join Over 1 Million Premium Members And Get More In-Depth Stock Guidance and Research
By Rick Munarriz - Feb 2, 2021 at 10:32AM

Comcast's (CMCSA 0.07%) Universal Orlando will be feeling a little less blue this year, but that won't be a good thing. Blue Man Group announced on Monday that it's ending its run at Universal Orlando's CityWalk, where it entertained guests for 14 years before last year's COVID-19 outbreak shuttered its performances.

The trippy high-sensation show starring musically inclined blue-faced artisans was a strong draw in its nighttime and matinee shows at the 1,000-seat theater that straddles the resort's two theme parks, just outside of either gated attraction's entrance turnstiles. Blue Man Group came to Universal Orlando's shopping and entertainment district eight years after Comcast rival Disney (DIS 3.51%) brought in Cirque du Soleil for its own high-end pageantry of acrobatic feats. Disney's spectacle is larger -- playing out on a 1,671-seat stage -- and the theme park giant is still planning to unveil a new Cirque du Soleil when it's safe to do so. Blue Man Group was Comcast's response to Disney bringing in Cirque du Soleil. Universal Orlando is going to need a new magnet to keep the money flowing after the park closes for the day. 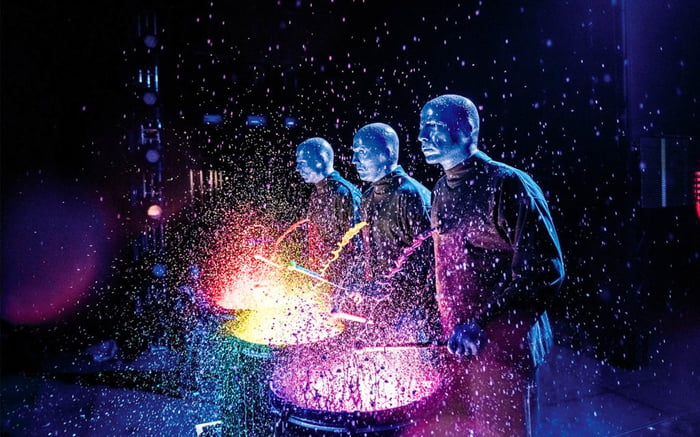 This may not seem like a big void for Comcast, and for now it's not. It's been nearly 11 months since Blue Man Group faded to black for the last time in Orlando. It's business as usual -- or in this case business as unusual -- in the new normal. However, when we get far enough into the pandemic-vanquishing cycle to begin entertaining tourists with money to spend on premium stage shows, it will leave a hole in the programming.

A high-profile show generates incremental revenue, of course, but this is bigger than that. Day guests with reservations for a nighttime show will stay in the parks longer, likely grabbing a bite before the show without leaving the resort. An acclaimed third-party experience like Cirque du Soleil or Blue Man Group gives tourists one more reason to stay on-site.

The big question now is what Universal Orlando will do with that space. For 15 years after Universal Studios Florida debuted in 1990 it was home to Nickelodeon Studios, sliming guests in a continuously running behind-the-scenes experience and simulated show format. The studio also hosted actual Nickelodeon channel shows and broadcasting events. The theater was part of the Universal Studios Florida park at the time. It was only after the Nickelodeon concept closed in 2005 that it was carved out of the park's blueprint and made into its own venue that doesn't charge theme park admission.

Comcast can't go back to the Nickelodeon well. It doesn't own the network, and the platform is no longer as ubiquitous or relevant as it was in its prime. With plans for the Epic Universe theme park now on hold, one can argue that it would be a good place to flesh out the Super Nintendo World that's opening in Japan later this year and at Universal Studios Hollywood as early as next year. Unfortunately there is not enough room to offer the complete experience.

Another property that was rumored to be going into the now-stalled Epic Universe theme park in Orlando was an area dedicated to Universal Classic Monsters. The former Blue Man Group building could be refashioned into a year-round haunted house attraction, a feature the resort already experimented with when it opened a Stranger Things scare maze for day guests a couple of years ago and again when it opened some walk-through haunted houses in the fall of last year when it was clear that its annual Halloween Horror Nights event wasn't going to happen. And the monsters are properties that Comcast actually owns, making them a natural fit.

Comcast has a hole to fill, but every empty space is an opportunity for improvement right now. As far as media stocks go, Disney may seem to have won this round against Comcast, but the fight is not over. The fight is never over.