Shares of Ammo (POWW -0.73%) closed 13.7% higher on Tuesday after the ammunition manufacturer announced the resumption of production on a manufacturing line for "improved" .50 caliber ammunition.

Production will be at the Jagemann Munition Components plant that Ammo acquired as part of its March 2019 acquisition of Jagemann. 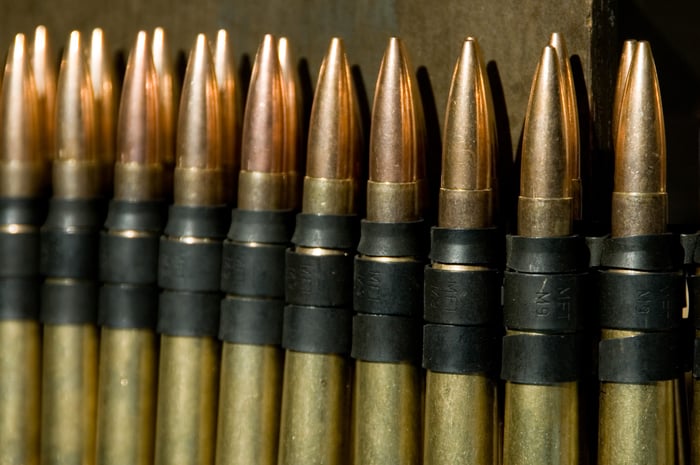 .50 caliber is a big bullet -- and could mean big bucks to Ammo. Image source: Getty Images.

Ordinarily, this would sound like a rather ho-hum announcement, but Ammo noted that the reason it is restarting production is "to address increased market demand and fulfill current orders" -- which suggests that restarting production will be accompanied by increasing sales. Further reinforcing this thesis, Ammo said it has been receiving "increasing indications of export interest from abroad."

In that regard, late last month Ammo noted that it had won a "significant" ammunition export contract from an unnamed foreign buyer.

Ammo management further commented that "2021 has started off to be a great year for AMMO." Over the past 12 months, Ammo generated total sales of only $27.3 million. But the company says its .50 caliber production line alone should generate a minimum of $40 million in annual revenue "at current production levels," and if production is increased, revenue could exceed $80 million -- nearly triple current levels from a single product line.

No wonder investors are enthused.

Why Ammo Stock Was Up Today