Please ensure Javascript is enabled for purposes of website accessibility
Log In Help Join The Motley Fool
Free Article Join Over 1 Million Premium Members And Get More In-Depth Stock Guidance and Research
By Keith Noonan - Feb 2, 2021 at 8:45AM

Could BlackBerry be the next GameStop?

Shares of BlackBerry (BB -2.16%) soared 112.8% in January according to data from S&P Global Market Intelligence. The technology company's stock benefited from excitement surrounding short squeezes after incredible gains for GameStop stock kicked off a scramble to find other similar opportunities.

BlackBerry has moved away from its phone hardware business and is now focused on cybersecurity software and Internet of Things solutions. However, the company's growth initiatives haven't been fairing that well, and a bullish fundamentals-based case on the stock involves some speculation that the business will get traction with new contracts.

Despite strong growth trends for Internet of Things and cybersecurity services, the company has been losing market share, and its overall revenue dipped 18% year over year last quarter. Lackluster business performance invited sizable short positions, and that made BlackBerry a target destination for investors seeking stocks that could potentially be the next GameStop. The push helped BlackBerry's share price more than double last month, but it probably won't match the video game retailer's incredible gains.

BlackBerry stock has continued to climb early in February's trading. The company's share price is up roughly 1.8% in the month so far. 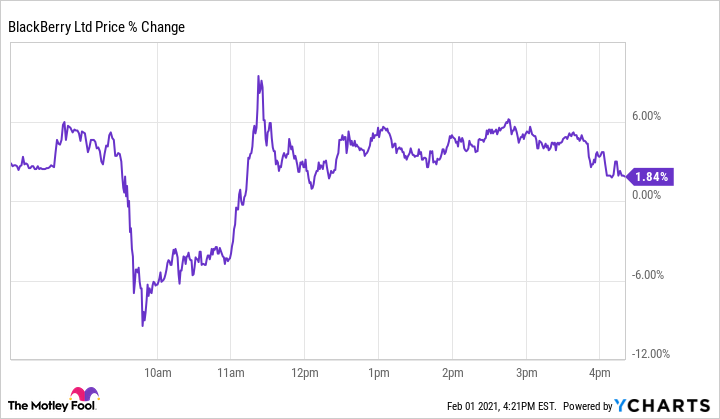 Incredible performance for GameStop stock (which is now up roughly 1,090% even after a recent pullback) and BlackBerry's own recent surge highlight the potential for explosive short-squeeze-driven returns amid volatile market conditions.

However, investors should be wary of going all-in on this strategy. It may still be possible to record some big gains with this approach, but there's also a good chance people attempting to get in at this stage will get burned.

BlackBerry now has a market capitalization of roughly $8.2 billion and is valued at approximately 8.7 times this year's expected sales.