Please ensure Javascript is enabled for purposes of website accessibility
Log In Help Join The Motley Fool
Free Article Join Over 1 Million Premium Members And Get More In-Depth Stock Guidance and Research
By Keith Noonan - Feb 2, 2021 at 8:32AM

The electric vehicle company's share price has skyrocketed roughly 1,410% over the last year. 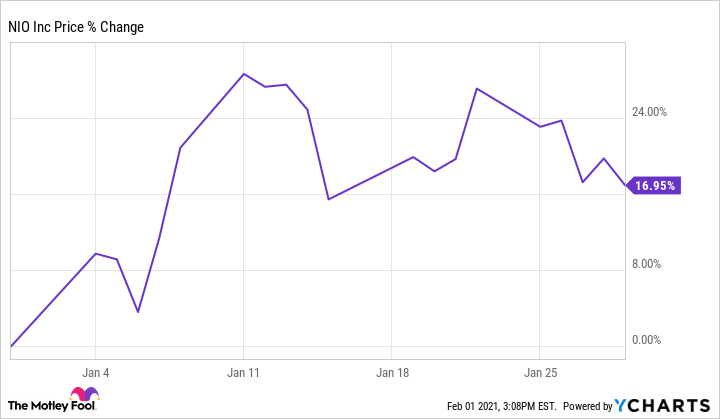 Outside of a ratings downgrade from Citi, major analysts were generally positive on the EV leader and its potential to deliver on the promise of being the Tesla of China. Citi's Jeff Chung downgraded his rating on the stock from buy to neutral in a note published on Jan. 11. However, he still raised his one-year price target on the stock from $46.40 to $68.30 per share, and some other analysts were considerably more bullish.

Deutsche Bank analyst Edison Yu also published a note on the stock on Jan. 11, maintaining a buy rating and hiking the firm's price target from $50 to $70 per share. Nomura than initiated coverage of NIO stock on Jan. 22, with analyst Martin Heung giving the stock a buy rating, setting a price target of $80.30 per share, and praising the company's Tesla-like approach to building out its electric vehicle business.

Finally, Morgan Stanley's Tim Hsiao closed out the month with some very bullish coverage on the Chinese EV leader. The analyst published a note on Jan. 28, maintaining an overweight rating on NIO stock and raising the firm's one-year price target from $33 to $80.

NIO published its latest monthly vehicle delivery data on Feb. 1, and the results were impressive. The company delivered 7,225 vehicles in January, an increase of roughly 352% compared to the prior-year period.

China represents a massive market with roughly 1.4 billion people, and government efforts to move the country to EVs could be a powerful long-term tailwind for NIO. The country is notably reducing national subsidies for purchasing electric vehicles by roughly 20% this year, but adoption should still see strong momentum over the next decade, and NIO may also be able to build a service-based business around its autonomous driving software.

NIO has a market capitalization of roughly $89 billion and is valued at approximately 18.5 times this year's expected sales.