Please ensure Javascript is enabled for purposes of website accessibility
Log In Help Join The Motley Fool
Free Article Join Over 1 Million Premium Members And Get More In-Depth Stock Guidance and Research
By Keith Speights - Feb 2, 2021 at 11:00AM

It's why the market shrugged off the big drugmaker's fourth-quarter earnings miss.

Pfizer (PFE -0.15%) achieved several huge milestones in the fourth quarter of 2020. The big drugmaker, along with its German partner BioNTech, reported outstanding data from a late-stage study of COVID-19 vaccine BNT162b2. Pfizer and BioNTech also became the first to win U.S. Emergency Use Authorization for their vaccine.

What wasn't known, however, was how Pfizer performed financially in the fourth quarter. Now we know. The company announced its fourth-quarter and full-year 2020 results before the market opened on Tuesday. Here are the highlights from Pfizer's Q4 update -- and why they simply don't matter very much. 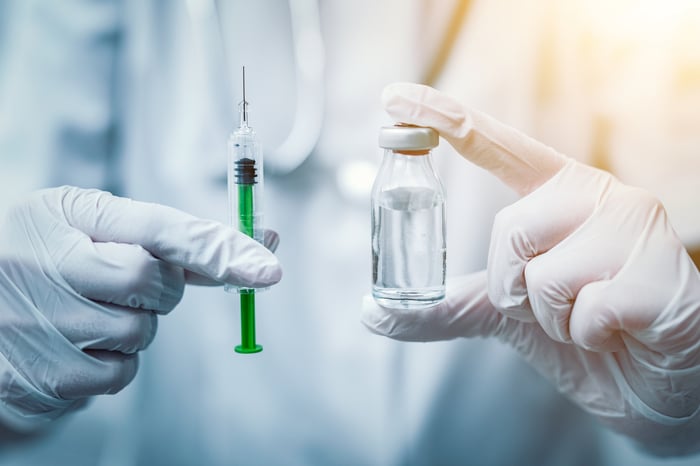 Pfizer generated revenue in the fourth quarter of $11.7 billion, a 12% increase from the $10.4 billion reported in the prior-year period. This result topped the average analyst revenue estimate of $11.43 billion.

Pfizer's shares slipped a little in early trading on Tuesday. Why didn't the big pharmaceutical stock fall even more after its Q4 earnings fell well short of expectations? Investors didn't care about the miss.

It's not that the company's Upjohn unit continued to serve as a drag. Pfizer spun off the Upjohn business in November and merged it with Mylan to form Viatris. All of the company's Q4 numbers excluded any impact from Upjohn, which was accounted for as a discontinued operation.

The reason why Pfizer's Q4 results don't matter very much, though, is that they don't include the impact COVID-19 vaccine BNT162b2 will have going forward. Pfizer did report that the vaccine generated sales of $154 million in the fourth quarter. However, that amount was excluded from its reported revenue total.

More importantly, investors fully recognize that Pfizer's financial results in 2021 will look much different than the company's Q4 results. There's simply no reason to dwell on the recent earnings miss.

The primary driver behind this impressive projected revenue growth is, of course, BNT162b2. Pfizer anticipates the vaccine will rake in around $15 billion this year. This number is higher than some analysts initially expected in part because Pfizer will be able to sell more doses after the discovery of an additional dose in the vials for BNT162b2.

Pfizer also looks for 2021 adjusted earnings per share between $3.10 and $3.20. The company increased its guidance from the range of $3 to $3.10 provided in its previous outlook.

In short, Pfizer's future is going to look very different from -- and much better than -- its recent past. Its Q4 results don't matter much with that future in view.