These stocks cratered in 2020. The promise of recovery is uncertain.

Our economy was left under unprecedented siege in 2020, with unemployment spiking to nearly 15% in April and the stock market falling nearly 30% around the same time . Somewhat surprisingly, the broader stock market recovered by December, with the S&P 500 returning 15.5% for the year.

While the S&P in aggregate provided positive returns, several stocks within the index experienced significant losses. Of the worst-performing stocks throughout 2020, there was a concentration of them in the cruise line and traditional energy sectors. Could these sectors and their stocks see a recovery in 2021? Let's take a look.

The 10 worst-performing stocks in the S&P 500 for 2020 contained a lengthy roster of oil and other traditional energy stocks. Among them were Occidental Petroleum Corporation (OXY -4.23%), Marathon Oil Corporation (MRO -5.55%), Diamondback Energy (FANG -5.77%), and ONEOK (OKE -1.49%) -- all losing around 50% of their respective values throughout the year. This should be no surprise, as demand for transportation and travel declined precipitously, thereby affecting the need for oil and other traditional fuel sources. Furthermore, supply levels persisted, further depressing the stocks.

While it's reasonable to expect that travel will steadily recover throughout the year, the traditional energy industry faces major competition from cleaner, more sustainable firms. Many investors, especially those of younger generations, have ethical concerns with investing in any business that harms the environment. When we think about companies that are likely to grow far into the future, those that promote a dependence on fossil fuel tend to be at the bottom of the list. The stocks have the potential to recover in 2021, but don't expect much from them as long-term buy-and-holds.

Cruising to a loss

The cruise industry suffered as much as any in 2020, with Norwegian Cruise Line Holdings (NCLH -9.33%) and Carnival Cruise Lines (CCL -14.13%) both losing more than half their respective values. It turns out that people don't demand close living quarters on a vessel detached from land when the world is in the throes of a respiratory pandemic. I'm no fortune teller, but it stands to reason that without an overhaul of the industry and new large-scale sanitization methods -- along with public buy-in -- choppy waters lie ahead for most cruising companies. 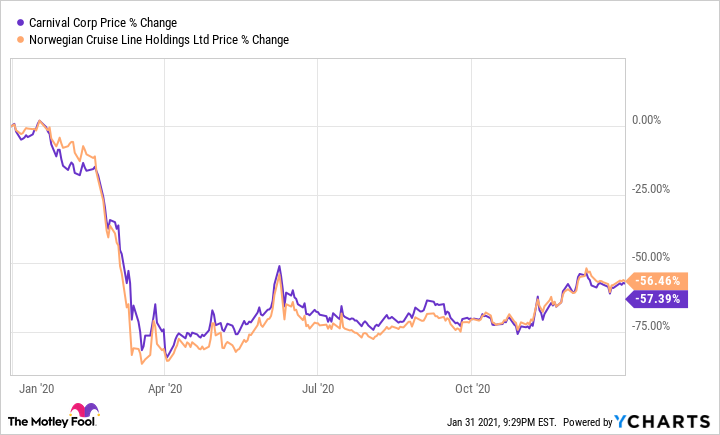 What is even less encouraging is that the vaccine rollout has taken significantly longer -- and is far more complicated -- than originally anticipated. On top of that, simply convincing the public that vaccines work has also been a challenging task. Given that these companies have sustained tremendous losses and have taken on significant debt to continue operating, I wouldn't feel confident about a 2021 recovery. This is not to say that they'll definitely never recover, but you'd be hard-pressed to find a more beleaguered industry at the moment. 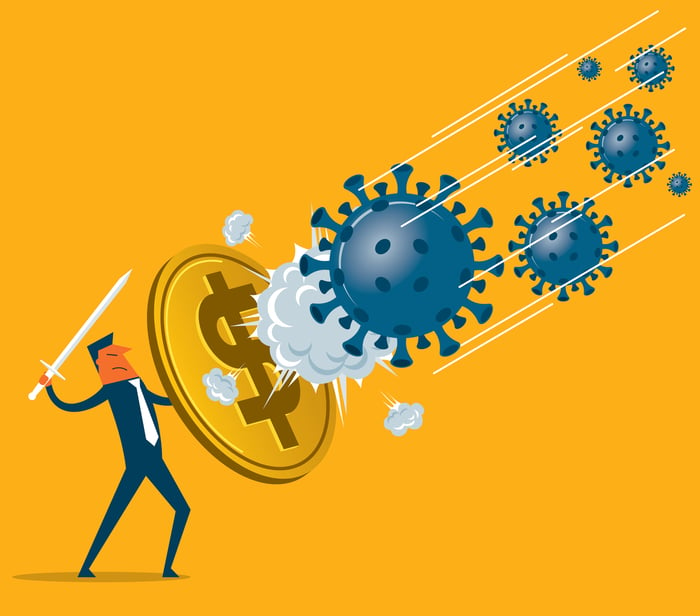 Don't worry if they don't recover

The understated beauty of the S&P 500 index lies in its self-cleansing nature. If a company's value falls to the point where it no longer qualifies for inclusion within the index, it will be replaced. In all likelihood, it will be replaced with a faster-growing company with better long-term prospects that justify benchmark inclusion. This is another reason why simply holding the index itself over extended periods is likely to produce more stable performance than if you were to try to continuously predict winners for the following year.

Rather than analyze single stocks within specific sectors, you might consider a buy-and-hold approach of a few low-cost, broad market index funds (like an S&P 500 index fund) covering the global landscape of stocks. This approach is likely to save you a lot of time, effort, and mental energy, and as was the case in 2020, provide investors with a robust return.

Is It Time to Buy the S&P 500's 3 Worst-Performing October Stocks?

Do Carnival Insiders Know Something We Should?