Please ensure Javascript is enabled for purposes of website accessibility
Log In Help Join The Motley Fool
Free Article Join Over 1 Million Premium Members And Get More In-Depth Stock Guidance and Research
By Jason Hawthorne - Feb 4, 2021 at 6:55AM

When discussing rising healthcare costs, almost every politician will pick a side. Regardless, the healthcare landscape is changing to deal with the problem, and certain parts of the sector are more exposed to those changes than others. For some prominent companies, change could dramatically affect how they perform over the next decade. Instead of relying on the old model to stay in place, investors should look for companies that are reducing costs while facilitating higher-quality or more convenient care. That is where value will be added in the healthcare industry over the next decade. 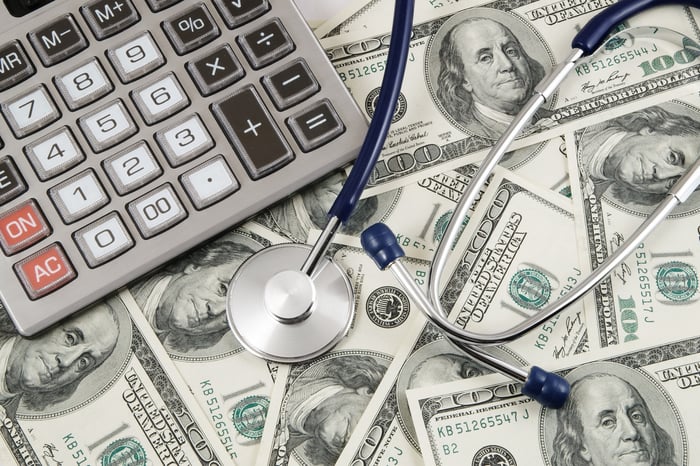 The problem for the healthcare industry isn't just how much Americans spend on healthcare; it's how fast the costs continue to rise. The U.S. has the most expensive healthcare in the world, spending an average of $11,582 per person in 2019. That was 17.7% of GDP. The spending is expected to grow to almost 20% of GDP by 2028.

Although drugmakers end up as the villain in many conversations, they actually make up only 10% of U.S. healthcare costs compared to 33% for hospitals and 20% for physicians and clinics. The attention is probably because the drugs are easy to single out. Stories like Gilead Sciences' $84,000 treatment for hepatitis C in 2014 and Mylan's 550% price increase of the Epipen through the mid-2010s make catchy headlines, but they don't typically address root causes or solutions.

The Centers for Medicare & Medicaid Services (CMS) has a strong commitment to value-based care, a framework where reimbursement is based on the quality and cost-effectiveness of the care provided, instead of simply letting health systems pass on costs. That mandate has inspired a wave of consolidation across the industry as companies try to gain operational efficiencies and increase their bargaining power by getting bigger.

Between 2013 and 2018, there were 103 hospital consolidation announcements on average per year. That dwarfs the average of 68 in the seven years prior. Despite increasing profitability, prices have actually increased between 6% and 18% in these mergers. To make matters worse, there isn't evidence that the quality of care improved after the deals, either.

Retailers have also been getting in on the action. When CVS Health (CVS 1.92%) closed its acquisition of insurer Aetna in 2018, the two companies said they would reduce the cost of administration and patient care by steering more customers through less-expensive walk-in clinics. It's an odd setup, with the largest pharmacy benefits manager (CVS Caremark) negotiating with the fifth-largest insurer (Aetna) on behalf of the largest pharmacy (CVS), all under one corporate umbrella. The tie-up has improved some operational metrics that should translate to lower costs like adherence to taking medication, avoiding emergency room visits, and staying in network for doctors visits. It remains to be seen how much of the savings are passed on to consumers.

Value to all stakeholders will be key

The companies that can clearly facilitate benefits to both consumers and healthcare companies may end up being the biggest winners. This is especially true for companies using technology to connect the various groups.

The COVID-19 pandemic has thrust telemedicine, and companies like Teladoc Health (TDOC -0.52%) and Amwell (AMWL 0.99%), into the limelight. Telemedicine not only shifts care to lower-cost settings away from the emergency room, it increases access to care for those who may not be able to visit a doctor easily.

Teladoc has gone a step further, acquiring Livongo, a chronic disease management company focused on diabetes. One in seven dollars spent on healthcare in the U.S. currently goes to treatment of the disease and its complications. By facilitating care at lower costs for more patients, Teladoc is addressing key pain points across the entire patient journey.

Another company benefiting all stakeholders is GoodRx (GDRX -1.85%). The company's app lets consumers find discounts on the drugs they need by searching more than 70,000 pharmacies online. The company claims it has helped Americans save $10 billion on prescription drugs. The lower prices increase a patient's ability to afford their prescriptions. That helps drugmakers and insurers by increasing the percentage of people who fill their prescriptions and avoiding the costly follow-up care for those who might not fill them otherwise.

While some segments of the industry consolidate, others are left with fewer customers to compete over. This has the natural effect of reducing prices over time. Despite continued innovation, investors should look out for shrinking gross margins of medical device makers like Intuitive Surgical and Medtronic, as well as major pharmaceuticals like Merck and Eli Lilly. If typical economic principles hold, these companies might find it harder to pass price increases along as the industry consolidates around them, to the detriment of shareholders and their returns.

Technology and consumer-driven decisions are only starting to take hold in the industry, but some companies are already being rewarded for increasing access and transparency while reducing costs. As America's Baby Boomer population ages, rising costs will get more regulatory attention since a growing percentage of healthcare spending will come from the government. If the industry has consolidated around a few major players, the pain of cost containment might fall on the segments that remain relatively fragmented. With such a clear societal need but so much debate over solutions, finding companies that can benefit all stakeholders could provide the safest exposure to the industry. How the problem of rising healthcare costs is addressed could ultimately determine the winners and losers in the coming years.