Please ensure Javascript is enabled for purposes of website accessibility
Log In Help Join The Motley Fool
Free Article Join Over 1 Million Premium Members And Get More In-Depth Stock Guidance and Research
By David Jagielski - Feb 4, 2021 at 6:30AM

And their payout ratios are still well below 50%

Dividend stocks are good investments, but those that grow their payouts are even better. Did you know that if a company raises its payout by 10% each year, it would take a little more than seven years for those dividend payments to be double what they are today? A 20% annual increase is less likely but at that rate, the doubling period would be just four years. And three stocks that recently hiked their payouts by at least 20% include Abbott Laboratories (ABT 3.05%), Nexstar Media (NXST 2.44%), and Reliant Bancorp (RBNC). 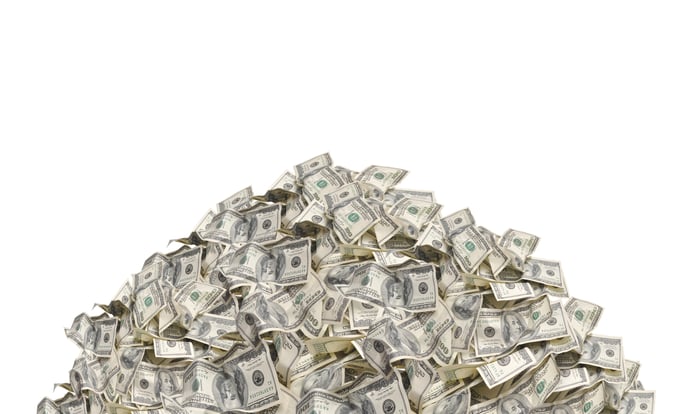 Healthcare giant Abbott announced in December 2020 that it would be increasing its dividend payments by a whopping 25%. It's the 49th year in a row that the company has hiked its payouts. One more increase next year, and Abbott will become a Dividend King. With quarterly payments of $0.45, investors are earning a yield of approximately 1.5%. That's right around the S&P 500 average of 1.6%. But it's still a relatively low yield, and that makes it easier for the company to increase its payouts by a large percentage.

The Illinois-based business delivered its fourth quarter results on Jan. 27 and it's no surprise it felt confident raising its payouts by such a large amount. Net sales for the period ending Dec. 31, 2020, totaled $10.7 billion and grew 28.7% from the prior-year period while net earnings of $2.2 billion more than doubled last year's tally.

Of the total sales, Abbott says $2.4 billion was related to COVID-19 diagnostics testing. The company has many tests for the coronavirus and its most popular, BinaxNOW, can produce results within 15 minutes, and the Food and Drug Administration issued an emergency use authorization for it back in August 2020. With COVID-19 not going away just yet, testing could continue to give Abbott's top line a boost for the foreseeable future.

With a payout ratio -- the ratio of total dividends paid to net income  -- of around 40%, Abbott has room to continue hiking its payouts but investors shouldn't get too accustomed to 25% increases: last year, the company raised its dividend by a more modest 12.5% which is still on the high side but a lot more reasonable.

Including its partners, Texas-based Nexstar owns and operates 198 television stations and reaches 68% of all households in the U.S. that have a TV. The media company announced in January that it would also be increasing its dividend payments by 25%. In addition, its Board approved the repurchase of up to $1 billion in common shares. The business credits its strong free cash flow and "long-standing commitment to enhancing shareholder value" as to why it has made these recent moves.

These types of increases aren't uncommon for Nexstar as last year it raised its payouts by 24% and in 2019 its dividend payments were 20% higher than the previous year. The company started paying dividends in 2013 at just $0.12 every quarter. Today, it pays nearly six times that amount at $0.70 and yields 2.4%.

Over the trailing 12 months, Nexstar has generated $722 million in free cash flow -- well above the $97 million in dividends it paid out during that time. And its modest payout ratio of 18% also suggests there's plenty of room left for the company to continue making big increases in the future.

Reliant is a Tennessee-based business that operates banking centers within the state. On Jan. 21, the company released its fourth quarter results, and its net income of $12.2 billion for the period ending Dec. 31, 2020, was nearly triple the $4.1 billion in profit it reported a year ago. A key reason for the growth is that the business grew in size in 2020 as the acquisitions of First Advantage Bancorp and Tennessee Community Bank Holdings now give Reliant $3 billion in consolidated assets, up from $1.9 billion at the end of 2019.

A few days after releasing the results, Reliant announced it would be increasing its dividend by 20%.

It's effectively a two-cent hike from $0.10 to $0.12. Last year, it increased its payouts by one cent, or 11% from its 2019 quarterly payments of $0.09. With the most recent increase, Reliant's stock now yields nearly 2.4%. Its payout ratio of 14% is also fairly low, and investors could see more increases in the future, especially as the company has gotten bigger in size.

However, with the economy still fragile amid COVID-19, it's by no means a guarantee of how it will do in the near future and that's why investors may need to be a bit more cautious with this dividend stock, especially given its lack of geographical diversification.