Please ensure Javascript is enabled for purposes of website accessibility
Log In Help Join The Motley Fool
Free Article Join Over 1 Million Premium Members And Get More In-Depth Stock Guidance and Research
By Nicholas Rossolillo - Updated Feb 4, 2021 at 9:56AM

NVIDIA's acquisition of ARM is all about providing computing choice, and powering a new era of AI.

It's no secret: NVIDIA's (NVDA 5.38%) pending acquisition of ARM Holdings from SoftBank Group (SFTBF 5.41%) has the potential to seriously shake up the global semiconductor industry. NVIDIA is a top tech researcher (it spent nearly one-quarter of its trailing 12-month revenue on R&D), and adding ARM to the mix will only bolster its position as a leader in future computing development.

But what exactly is NVIDIA getting from its purchase from SoftBank? This is actually a pretty good deal, and it's one that is being underestimated by NVIDIA's current stock price.

What NVIDIA is getting by buying ARM 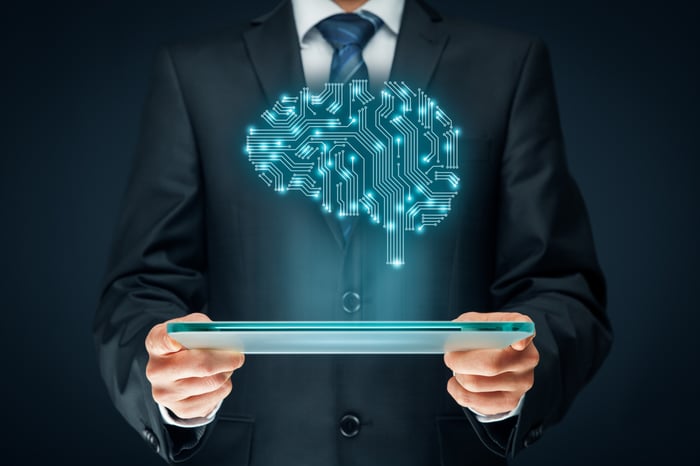 But what does NVIDIA get? ARM is a leading chip technology licensor. It makes money from royalty payments from companies that license its designs for use in their product portfolios. Some 70% of the world's population uses an ARM-based chip, from autos to data centers to myriad consumer electronics like smartphones and PCs. Through the six months ended Sept. 30, 2020, ARM revenue grew 22% year over year to $992 million.

On an annualized basis, NVIDIA will pony up 20 times ARM's current-year sales to purchase the chip licensor. NVIDIA's stock currently trades for a similar valuation at 22 times trailing 12-month revenue, and I like the decision to use its premium-priced share price as a currency to pay for over half of the acquisition. Assuming ARM's revenue holds steady with where it was at last report, it will haul in about $2 billion in revenue during the current fiscal year. That would be a sizable addition for NVIDIA, since it forecasted it will report about $16.5 billion in revenue during its last fiscal year (the 12 months ended Jan. 31, 2021). Holding everything constant, adding ARM will increase NVIDIA's sales by about 12%.

I believe this is an attractive long-term deal for NVIDIA. While the additional revenue is relatively small compared to what NVIDIA generates already, it's a highly complementary deal. NVIDIA itself is a top licensor of tech, especially its graphic processing units (GPUs) for high-end video games and as a computing accelerator in data centers. However, even after incredible growth in recent years as NVIDIA has applied its GPUs to new areas like artificial intelligence (primarily in data centers), it's still largely a niche player when comparing it to the massive chip industry worth nearly half a trillion a year in global spending. Remember, NVIDIA expects its sales will be only $16.5 billion over the last year. Compare that to the nearly $78 billion in revenue Intel (INTC 2.46%) hauled in during 2020.

Granted, Intel is a very different business model at this point (since it manufactures chips, while NVIDIA is "fabless" and leaves the chipmaking business to its partners). Nevertheless, adding ARM and powering up the chip design company's research with its own AI tech will be significant. NVIDIA says 2 million developers work within its ecosystem, but ARM will bring in an additional 13 million-plus developers. That is a massive new influx of engineers to the NVIDIA ecosystem that shouldn't be underestimated.

In a recent conversation I had with a spokesperson at NVIDIA, NVIDIA and ARM "changes the dynamics of the entire compute space" that has been dominated by Intel's chip architecture for decades. NVIDIA wants to bring more AI to the ARM ecosystem and extend artificial intelligence to all points in between the network edge and the data center. It changes the dynamics of the entire compute space, which has been dominated by computing architecture originally designed by Intel for decades. The idea is thus to upgrade how the compute world looks and offer more choice.

What would that look like exactly? Currently, data- and computing-intensive applications are largely taken care of in data centers. Some low-level AI can be handled by chips at the network "edge" (like Qualcomm's (QCOM 3.65%) mobile chips -- notably based on ARM architecture -- used in smartphones that combine a general-purpose CPU with an onboard graphics card), but by-and-large, AI dwells in data centers and is controlled by big organizations that can afford to build and manage them. But NVIDIA envisions a future where powerful AI computing is pulled out of the data center and applied across the computing ecosystem, from individual devices themselves to network infrastructure. ARM is that ticket for NVIDIA to accelerate its AI specialty in data centers and apply it to the billions of devices in use around the globe.

NVIDIA is paying a premium price for ARM if looking at current financials only, but this really is about the future and the possibility it opens up for NVIDIA to completely rewrite the way computing looks -- both personal and at the enterprise level. Viewed through that lens, NVIDIA bringing ARM into the fold looks like a real value to me, and even NVIDIA's own premium price tag looks like a long-term bargain given the direction this semiconductor leader is heading.