If you've finished The Queen's Gambit or Bridgerton and looking for the next juicy drama to follow, maybe you should become an investor in Luckin Coffee. Luckin was delisted from U.S. exchanges in June after prior management was found to have fabricated millions in fake sales. In the aftermath, the one-time high-flying stock plunged.

This summer also saw more drama come Luckin's way when former Chairman Charles Lu got himself removed from the Chairman position to avoid scrutiny from the investigation and then installed two hand-picked cronies to represent him on the board. After CEO Jenny Qian was fired, the company selected logistics VP Jinyi Guo as its new CEO.

After settling fines from both the SEC and Chinese authorities, Luckin is also being sued by its bondholders and former shareholders. The Cayman Court has appointed two outside lawyers, or "joint provisional liquidators" (JPLs), to investigate the business in order to potentially restructure the debt so the company can continue as a going concern.

While recent unofficial results from the JPLs offered some hope, even more C-suite drama just cropped up for the beleaguered company. 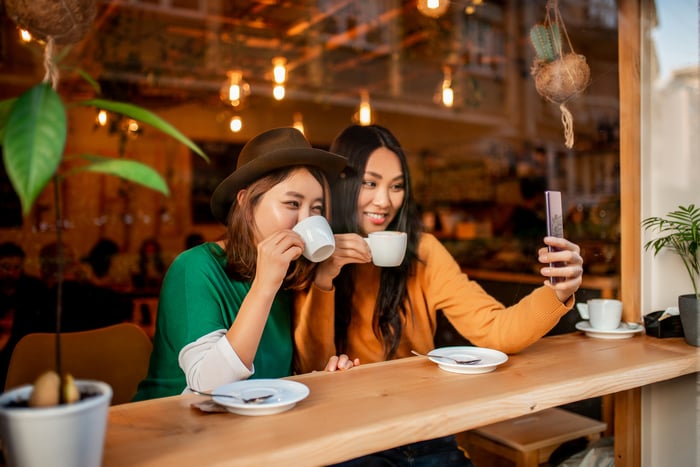 Though Luckin has not yet completed audited financials, the JPLs were able to get recent unaudited results via their access to the company's financial systems. It looks like Luckin has resumed growth, though obviously not anywhere near the pace falsely recorded when it was forging sales. Under new management, Luckin has decided to slow its growth and close down some underperforming or unprofitable locations, though it's still growing its store count overall. Additionally, Luckin has turned to a more capital-light franchise model, with 23% of its current 4,792 stores run by third parties.

Continued revenue growth actually seems pretty good, and shows a solid recovery from the COVID-19 pandemic. Still, these numbers are far, far below the 500% or so growth the company was posting prior to the scandal.

Luckin is still unprofitable, but the JPLs noted that store-level profit in aggregate reached breakeven in August, and that 60% of the company's self-operated stores reached breakeven or better by November. The JPLs also expect store-level profitability to improve going forward as the pandemic eases and the company pulls back on aggressive discounting.

Additionally, the JPLs also counted about RMB 5.175 billion, or $742.7 million, in cash on Luckin's balance sheet as of November. While that's healthy for now, remember that Luckin is still burning cash, despite recent improvements. It also has $460 million in convertible notes due in 2025.

But there's still crazy going on at Luckin

Of course, any update on Luckin wouldn't be complete without more audacious shenanigans from the company's former Chairman (and continued shareholder), Charles Lu. According to the JPL report, lawyers found two different trusts established in March of 2020 that appear to have been set up for Luckin to fund Charles Lu's other business, which is called UCAR. These two trusts received investments of roughly RMB 600 million ($92 million) each and were essentially cash loan infusions backed by either UCAR receivables or UCAR stock. Though UCAR had been making interest payments, the existence of the accounts is a clear breach of shareholder trust.

When Luckin's new board and new management discovered these trusts, they tried to terminate them and get Luckin's money back in November. Sure enough, UCAR is currently unable to pay one of the trusts back and has not responded to the other request. That's about $185 million that may have been further pilfered from Luckin shareholders.

It appears current management's effort to correct past wrongs may be rubbing some the wrong way. In early January, seven senior and middle executives wrote a letter to the board and one of Luckin's venture investors, accusing current CEO Jinyi Guo of "corruption, abuse of power to eradicate dissidents, and low capability to run the company."

Seem fishy? After all, the recent results don't seem all that bad. No surprise -- the letter may be Charle Lu's doing.

Guo responded on Jan. 6 that the letter was written by Lu and former CEO Jenny Qian, and that the other employees were "forced" to sign it. Guo also continued:

I personally asked the board of directors to set up an investigation team as soon as possible to probe into the incident and restore the truth. I have also assured the board that I won't interfere with the investigation, and I have a clear conscience of what I've done since I took office.

It's unclear how this particular intra-company drama will play out, but it's another reason to be skeptical of Luckin's stock. Though Luckin's over-the-counter traded shares have done fairly well in January following the unaudited results, most of that was likely due to shorts exiting the company along with other heavily shorted stocks. According to the most recent data, only about 15% of shares are shorted, but that's actually about half the company's free float.

At a $2.85 billion market cap, Luckin may seem like a value stock at around four times sales. Still, we have no idea what Luckin's margins are or how much cash it's currently burning. Additionally, no matter how good the financials look, management's childish soap operas and the company's history of deception are enough to keep me away. Until former Chairman Charles Lu is totally out of the company, as a shareholder or an influencer in any way, I wouldn't go near the stock.