Hopes for a recovery and a short squeeze seemed to drive the stock higher.

Shares of Designer Brands (DBI 1.08%) were charging higher last month. The DSW parent seemed to benefit from a number of trends, even though there wasn't much news out on the stock. Other hard-hit retail stocks also gained last month as investors looked ahead to the end of the pandemic. Designer Brands also benefited from the short-squeeze rally at the end of the month.

According to data from S&P Global Market Intelligence, the stock finished the month up 60%. The chart below shows its trajectory. 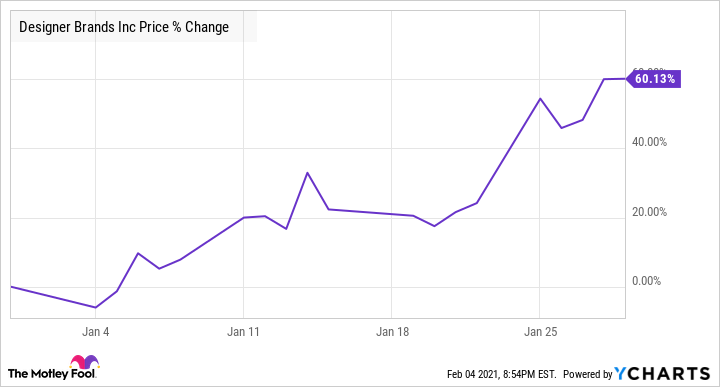 Designer Brands' rally started on Jan. 6, when the stock jumped 11% after Democrats swept the Senate runoff elections in Georgia. That raised hopes of a stimulus package from the new Biden administration, including stimulus checks of up to $2,000. More money in consumers' pockets would help struggling retailers like Designer Brands. 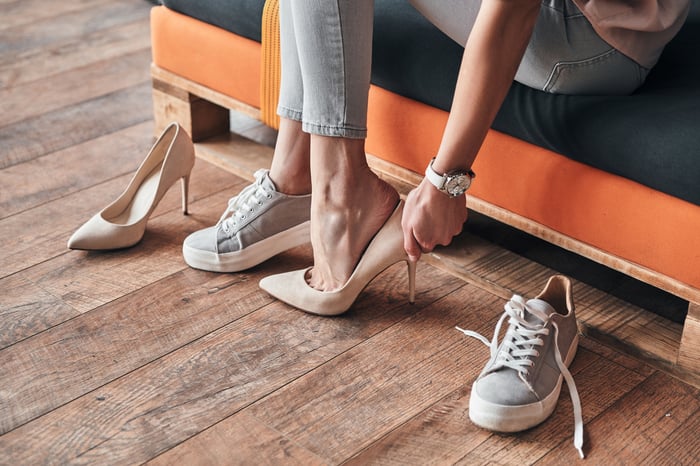 Two days later, C.L. King named the stock as a top pick for 2021. Analyst Steven Marotta said the company would have a strong second half of the year and called the stock undervalued, giving it a buy rating and a price target of $10.50.

On Jan. 11, the stock gained again, tacking on another 11% in sympathy with footwear retail peer Genesco, which delivered a strong preliminary earnings report that boded well for Designer Brands' own fourth-quarter numbers.

Finally, in the last week of the month, the stock surged on an apparent short squeeze alongside other consumer stocks like GameStop and AMC Entertainment Holdings, jumping 24% on high volume. It finished out the month with additional gains.

Unlike other short-squeeze stocks, Designer Brands shares have not pulled back, indicating that investors are still confident in its recovery. Even after last month's jump, the stock is still down 14% year over year, indicating more room for growth.

Fourth-quarter results are likely to be disappointing, with analysts expecting a revenue decline of 24%. However, the company will soon have the benefit of lapping last year's poor results, which, along with the proliferation of vaccinations, could drive the stock up further in the coming months.