Please ensure Javascript is enabled for purposes of website accessibility
Log In Help Join The Motley Fool
Free Article Join Over 1 Million Premium Members And Get More In-Depth Stock Guidance and Research
By Brian Stoffel - Feb 4, 2021 at 6:30AM

It's the first public company ever to do this.

It's a dubious paradox for veteran and beginning investors alike. What if focusing on something larger -- the existential mission of a company, and wider -- all stakeholders -- is a more sustainable, regenerative, and (yes) profitable approach?

I think it is.

This is why I'm excited that I still hold shares of Veeva Systems (VEEV 3.06%), a company that provides cloud solutions for pharmaceutical companies. Recently, it did something that no publicly traded company has ever done before -- eschew the singular focus on maximizing profits. 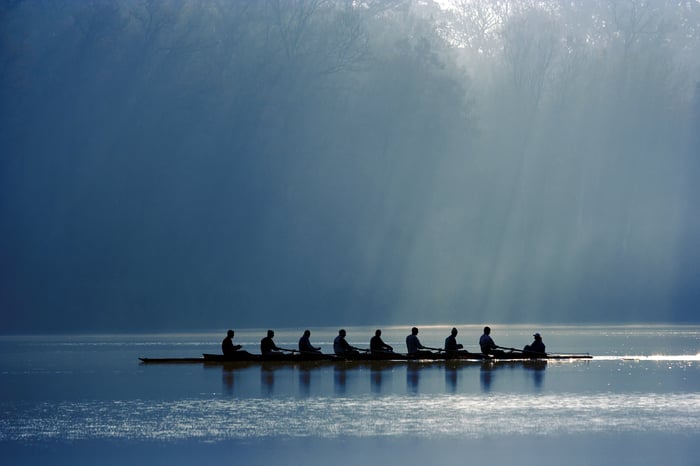 When all stakeholders are in alignment, the boat goes further. Image source: Getty Images.

The ABCs of PBCs

Technically speaking, Veeva recently decided to become a "Public Benefit Corporation," or PBC. According to the company's release, this means: "As a PBC, Veeva will remain a for-profit corporation but will be legally responsible to balance the interests of multiple stakeholders, including customers, employees, partners, and shareholders."

It's a shame that we need a new moniker for this, as this is essentially the same as two concepts we've touted for a long time at The Motley Fool: Conscious capitalism, or -- more to the point -- taking the long-term view.

Does this mean Veeva might be slower to make decisions? Probably. But the company is at the point now where it dominates its industry (more on that below). It can afford to do so. Does it mean that it might be trading short-term opportunities for long-term sustainability? Once again: Probably. And if -- as a shareholder -- that isn't for you, then holding Veeva any longer may not make sense.

But there's a flip side to this: Long-term sustainability. Think about it, if Veeva chooses to maximize profits:

The bottom line is best summarized by a quote from Gus Levy, a managing partner at Goldman Sachs in the 1970s: "At Goldman Sachs we're greedy, but we're long-term greedy." What does that look like in practice? The best explanation I can find comes from a 2012 Forbes article by Charles Biderman:

Long-term greedy means being a professional, which includes doing your homework, keeping your word, cleaning up messes, honoring relationships with clients and employees. In other words, doing the right thing for no reason all the time.

In other words, there's very little difference between "long-term greedy" and simply "doing the right thing."

But that's not the only piece of good news.

In 2019, I wrote about how Veeva had no coherent mission statement. That may not be a big deal while Peter Gassner -- the former Salesforce executive who founded and still runs Veeva -- is at the helm. But if there isn't a coherent, articulated compass for the company in the post-Gassner era, I worried it could flounder.

At the time, it got the company's attention, as a member of a PR firm hired by Veeva emailed me and we discussed what the company's mission was. He said Veeva was serious about doing something about it, but wouldn't say what. I can only assume now that the conversion to a PBC is what he meant.

One gem stands out from Veeva's PBC press-release: "Veeva is dedicated to customers' mission to advance human health and wellbeing."

That -- more than anything -- is the best mission Veeva could have. It is:

Not only that, it appears that this shift in focus is sifting into the rank-and-file employees. Reviews on Glassdoor.com have improved markedly.

Admittedly, such ratings can be gamed. But it's just one data point in a broader picture of engagement Veeva seems to be undertaking.

In case you're worried I'm overly focused on "soft variables" instead of cold, hard cash, Veeva is doing quite well on that front as well. Just peek at its key metrics over the past three-plus years.

Even more encouraging: The company's dollar-based revenue retention from its subscription services has been above 120% for the past three years. That means that existing customers not only stick with Veeva, but they spend 20% more every year. That engenders high switching costs and helps Veeva become a compounding machine.

Put all of that together, and I have no problem letting Veeva stay at 5% of my real-life holdings...and letting it compound for decades.